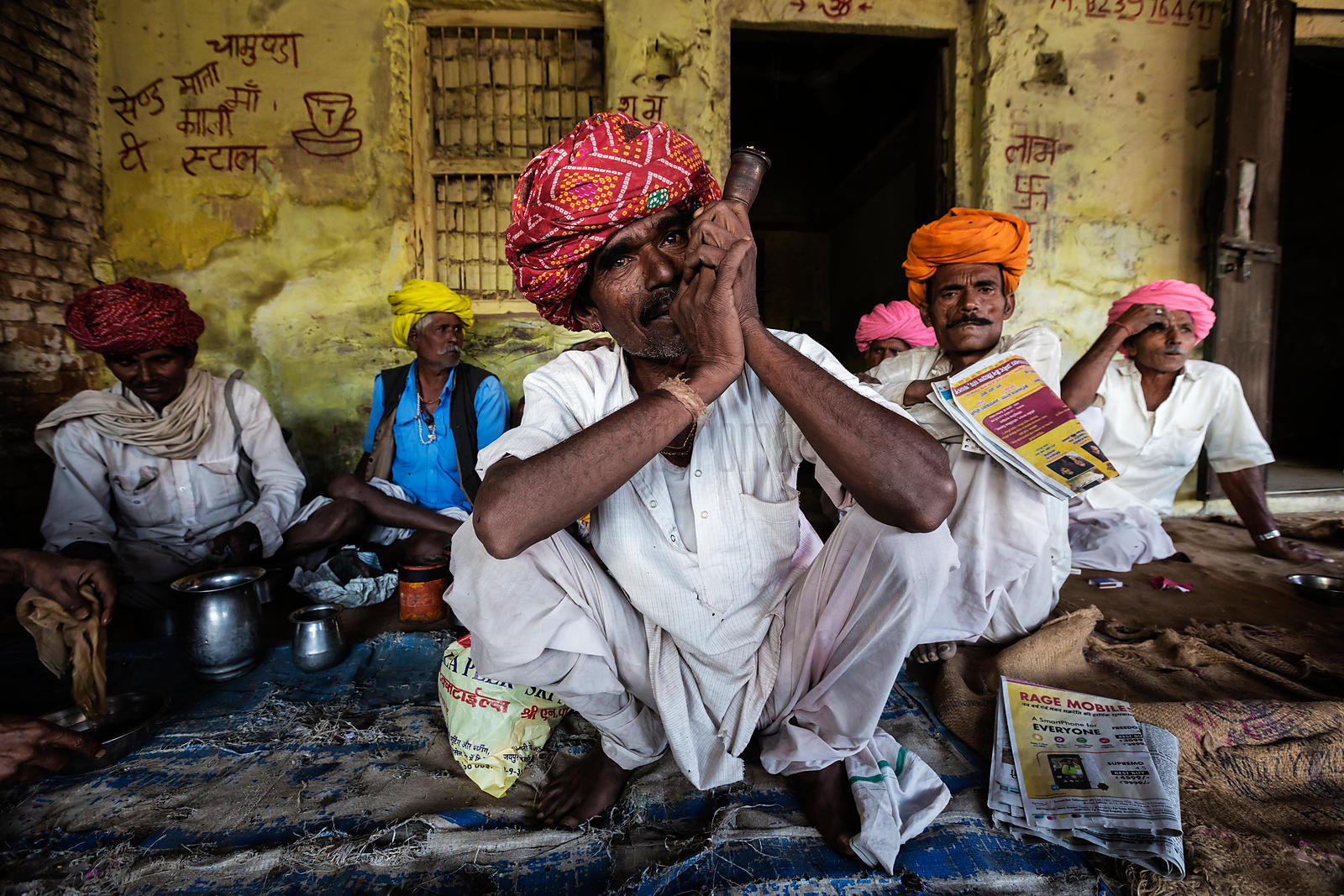 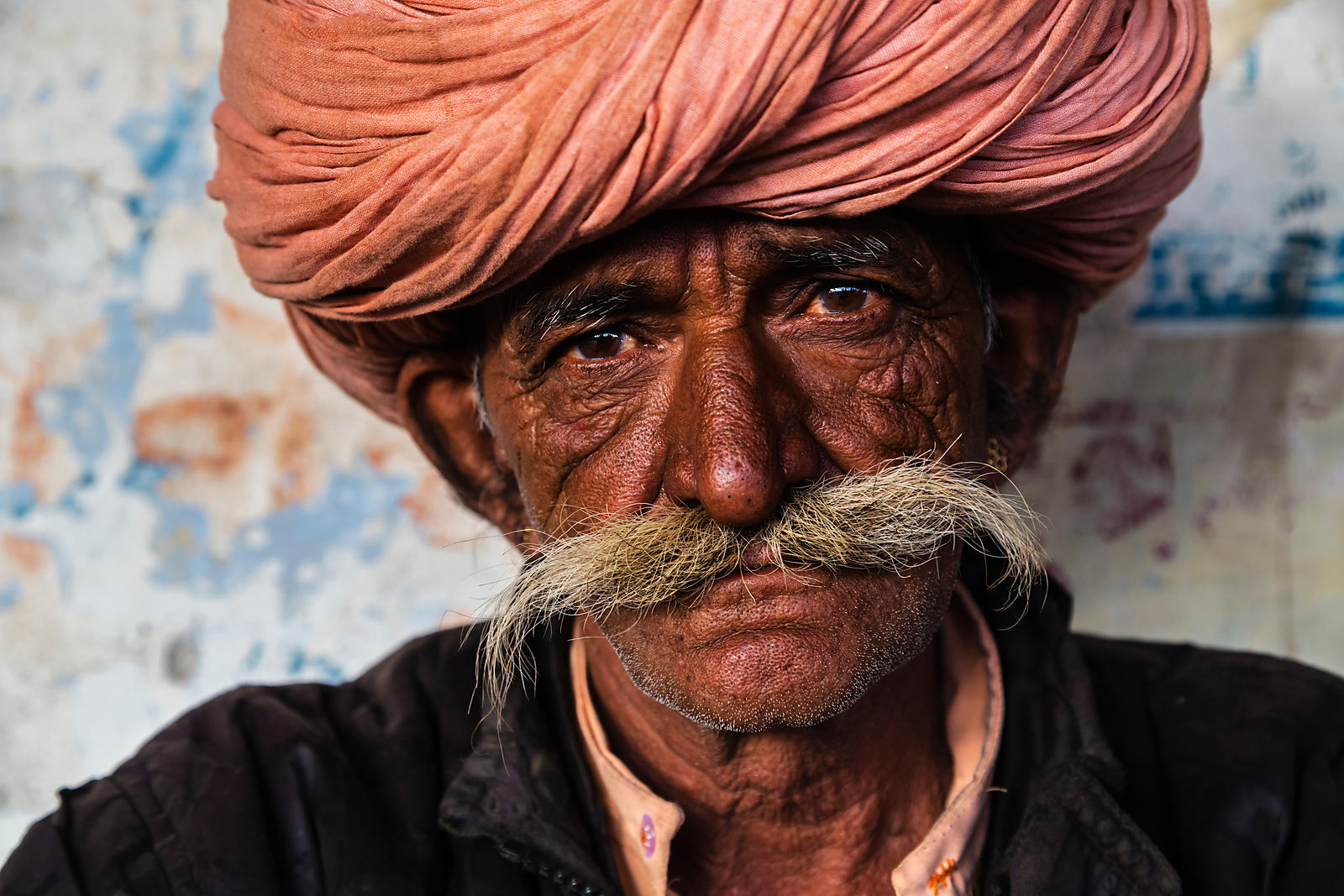 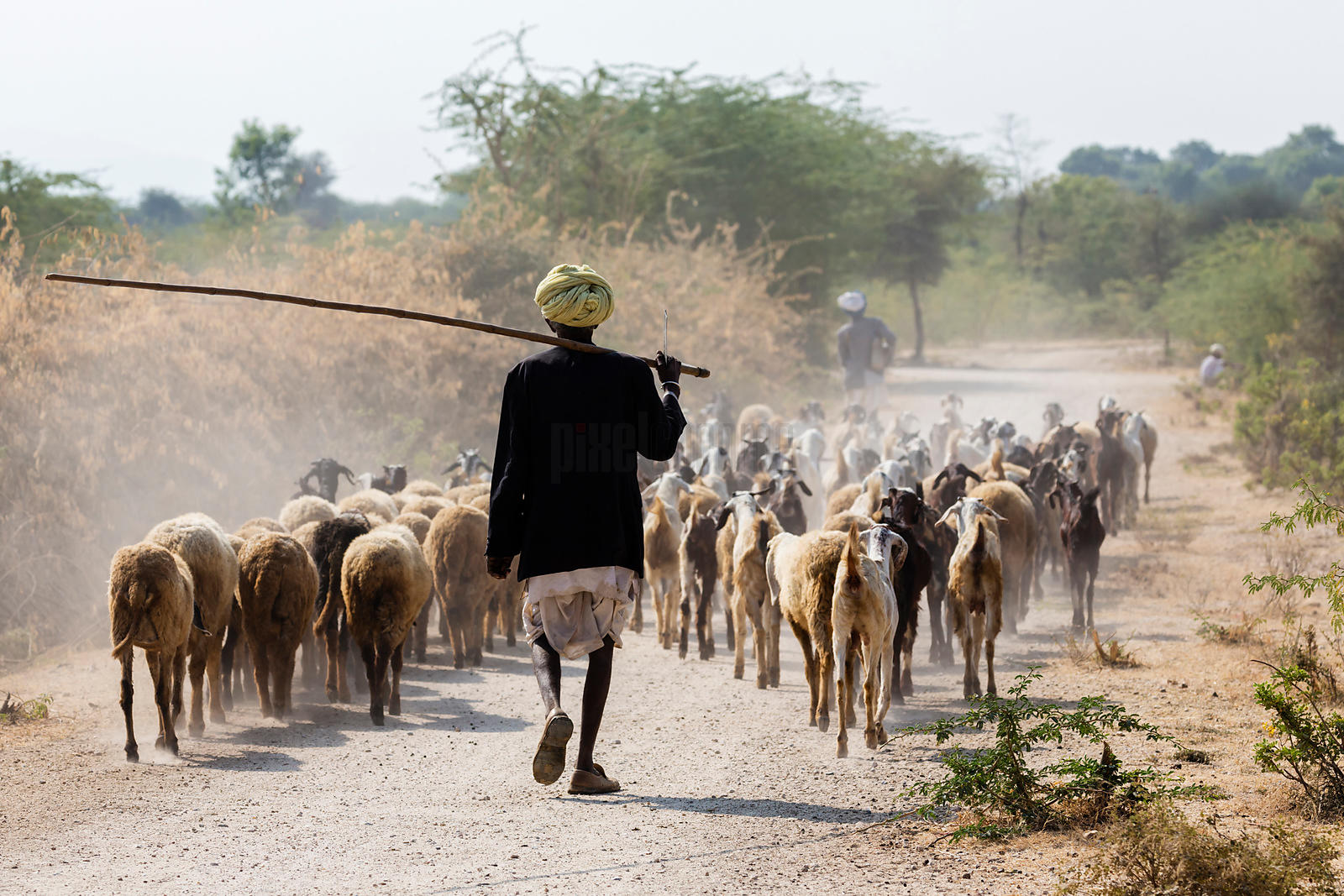 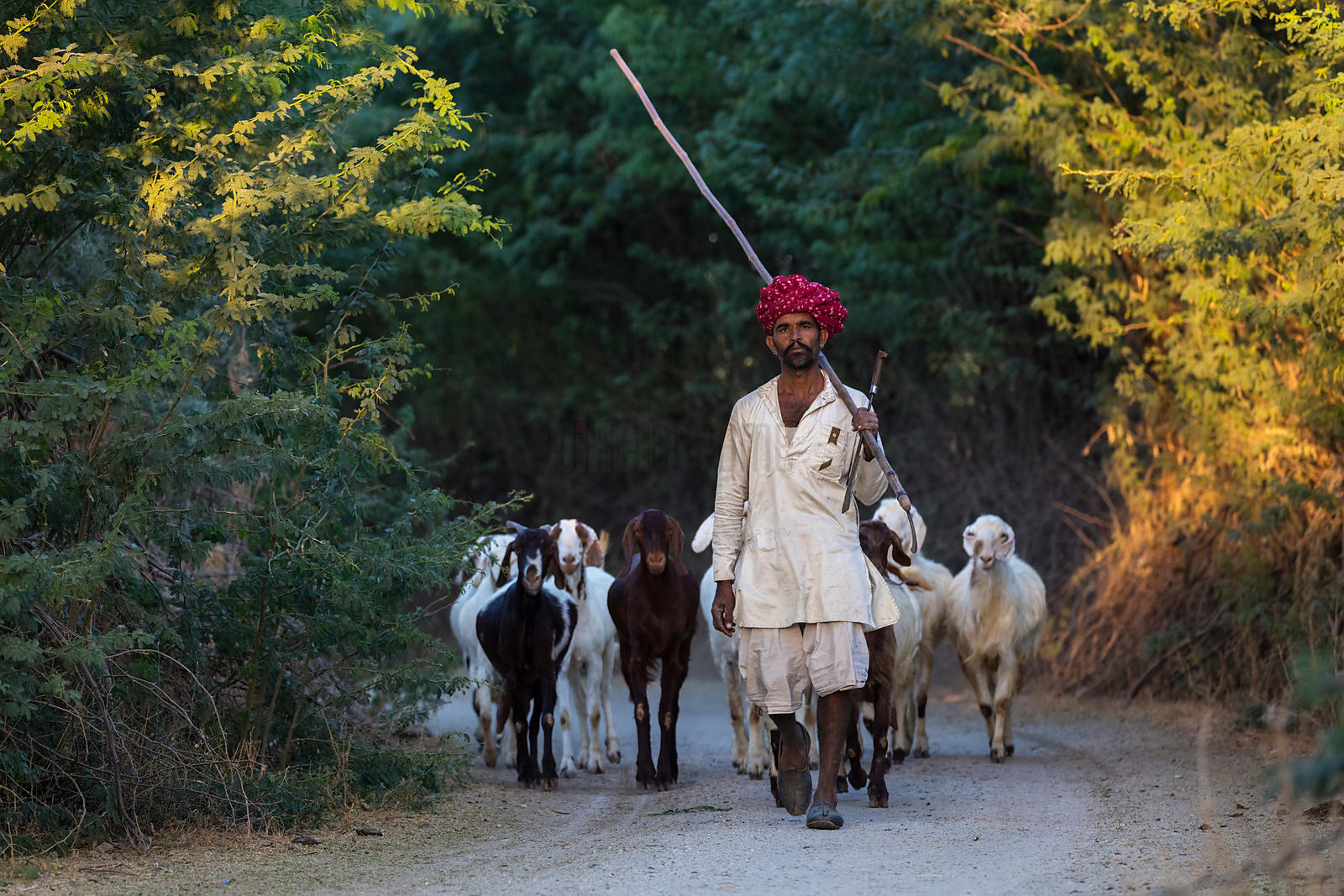 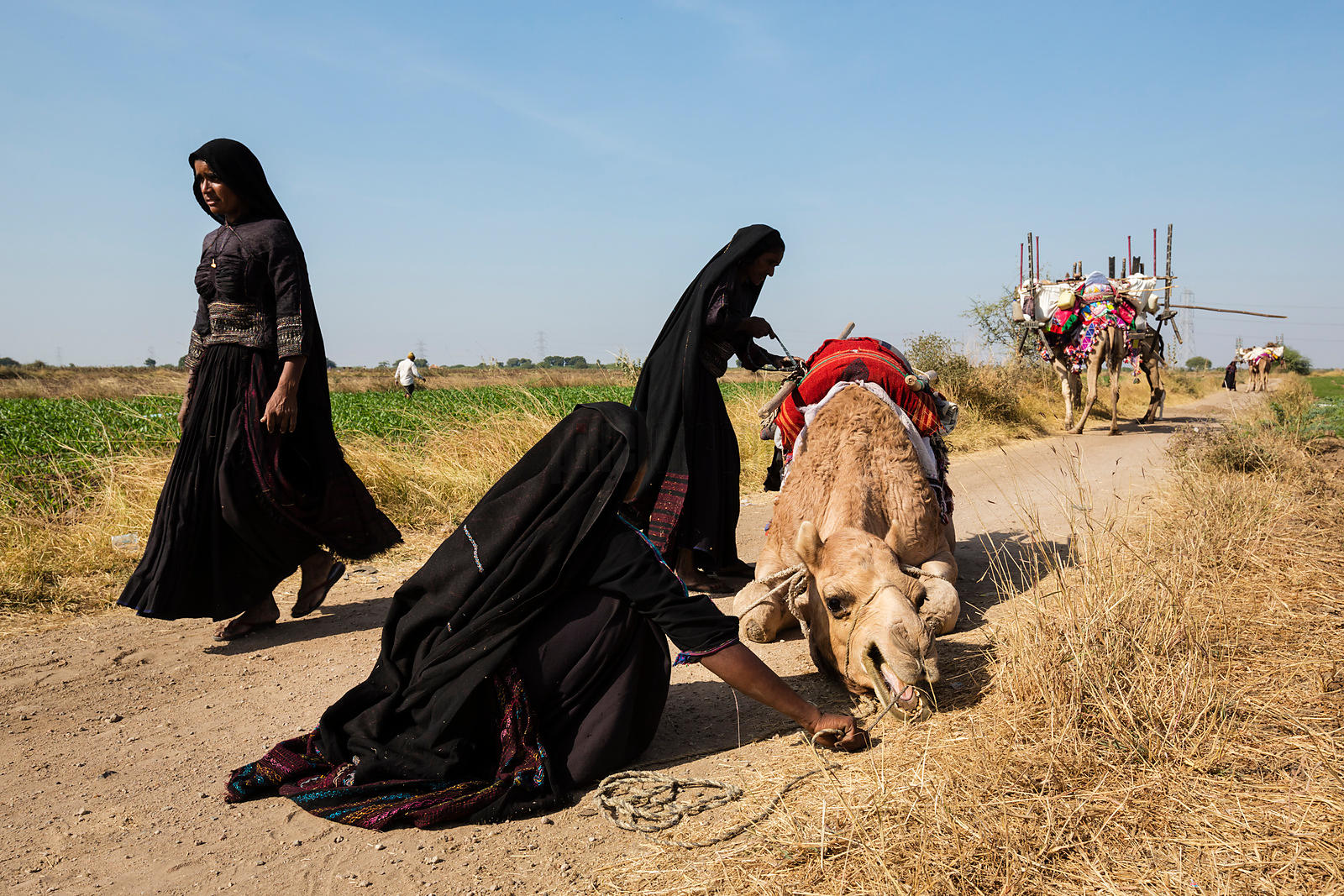 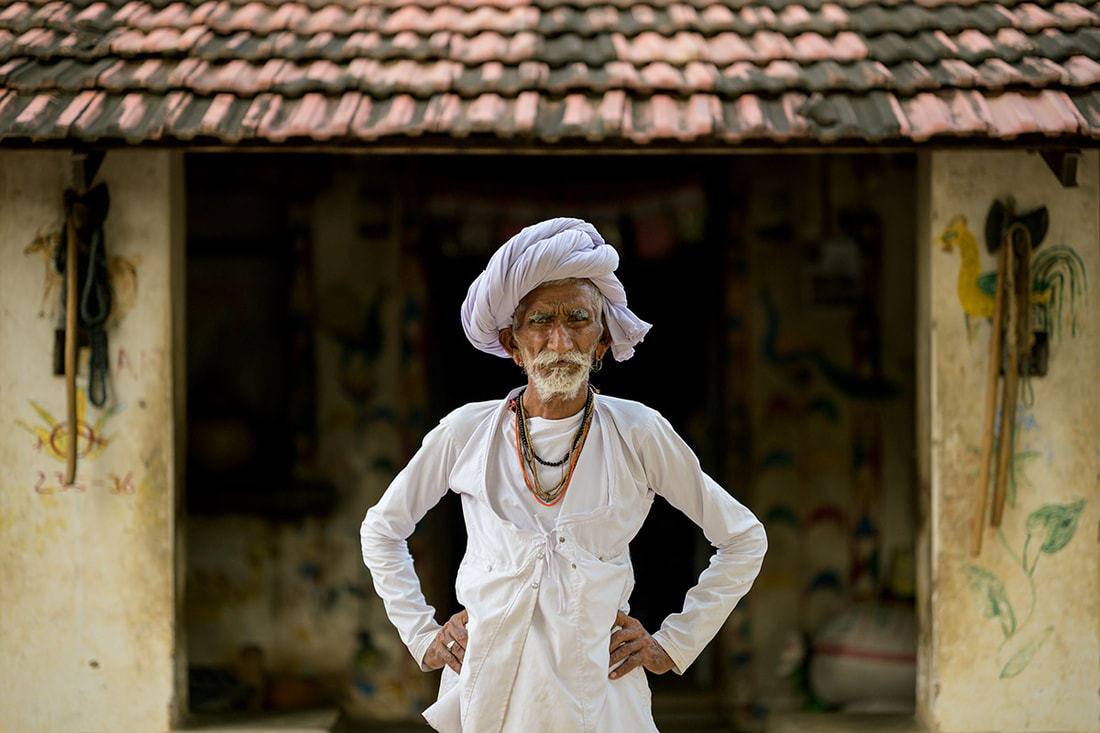 The Aravalli hills, mustard fields and villages surround this large expanse of land, in Southern Rajasthan bordering the state of Gujarat. An occasional splash of red adds a dash of colour and vibrancy to this land. The word Rabari is derived from ‘Rehaan’, meaning – a person who shows the path.

The community is involved in raising cattle, camels, sheep and goats. They are semi-nomadic, living in tents or under the open skies, and raising cattle, camels and goats–they have been travelling since ancient times using traditional routes to find greener pastures for their herds. Traditionally, the Rabari followed a highly nomadic way of life, following the seasonal rains for periods of time, and then returning to their villages.

This community has also been tolerant to leopards taking away and feeding on their livestock, as they consider it to be a spiritual offering to the gods. This is one of the main reasons, that the Jawai region still remains a habitat of harmony, for both leopard and man.

The Rabari men wear minimalist, simple clothing that is comfortable. They choose to wear white, as it is airy and is a colour suited to beat the scorching heat of the Rajasthan sun. They wear a red, white or yellow turban that not only prevents them from heat stroke, but also acts as a "safety helmet" when they trek around the hills with their herds. The elders in the community generally wear a white turban as a symbol of retirement, if that is their wish.

Rabari women and men are a fashionable lot. The ethnic safari jacket they wear is called a ‘borla’ and the comfortable loincloth is called a ‘pacheri’. Men and women traditionally have tattoos made on their faces, and they still wear a lot of jewelry. The women also wear heavily embroidered traditional clothing from a young age. When they get married, they are presented with ivory bangles that they must wear on their lower arms. Another set of bangles is added to the upper arm once a woman is welcomed into her husband’s home. These days the bangles are made of strong plastic, or occasionally wood.

During the trip we will stay at an ancestral property of Mr Shailendra Singh, situated in the foothills of Mount Abu – it has been developed, maintained and nurtured with great care.

It offers a wondrous mix of natural beauty – rivers, mountains, greenery and picturesque sunsets. The local culture and tradition, the village folk and tribe offer a unique perspective and enhance the experience. 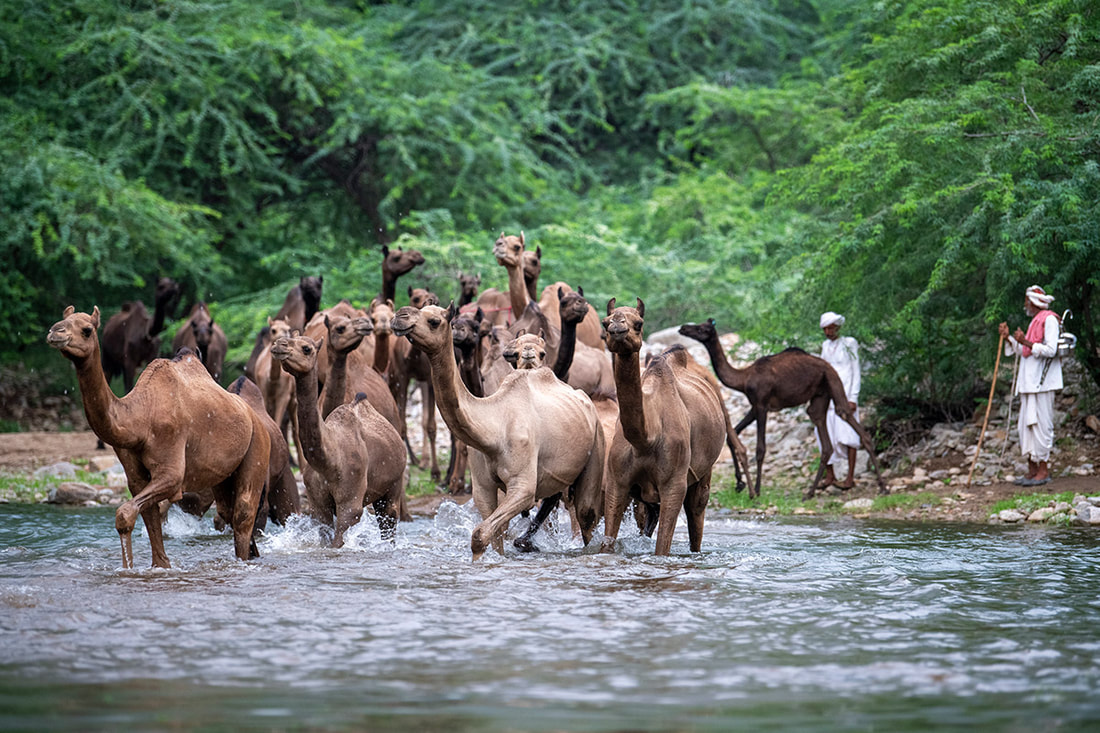 Day 1: Oct 1—Arrive in Delhi
On your arrival in Delhi you will be met by our representative who will escort you to your hotel and assist in checking-in. (check in time 12 noon). After a long flight, the day is free to walk around or relax at the hotel.

Day 2: Oct 2— Delhi | Udaipur
Today after breakfast we board our flight to Udaipur

Udaipur was founded in 1568 as the capital of the old Mewar state; it was the only Rajput stronghold to uphold its Hindu allegiance in the face of Muslim invasion. From the late 16th century, peace brought about an era of renaissance in the arts and encouraged the building of beautiful palaces around the lake which culminated in the City Palace, one of the largest palace complexes in the world. Undoubtedly the most romantic city in Rajasthan, and perhaps the world, Udaipur is situated 200 miles southwest of Jaipur. The city is built around Lake Pichola and has inevitably been dubbed the ‘Venice of the East’. Two island palaces, Jagniwas and Jagmandir, sit on the lake - the former is now the luxurious Lake Palace Hotel. The majestic City Palace towers over the lake and is bedecked by balconies, turrets and cupolas.

Later in the evening you will proceed for a Boat Ride on Lake Pichola.

Enjoy the boat ride in Udaipur along Lake Pichola! Watch the lake glimmer during a beautiful sunset as you pass Udaipur’s illuminated skyline dotted with mansions. Admire stately palaces on the lake's islands and learn about Udaipur’s culture and history from your knowledgeable guide.

Day 3: Oct 3— Udaipur
After an early morning street photography session we will drive out of Udaipur to some remote and colorful villages. We will spend the entire day exploring and getting close to the locals!

Day 4: Oct 4— Udaipur | Chittorgarh
Today after breakfast we will start our drive to Chittorgarh.

Chittorgarh is a major city in Rajasthan state of western India. It lies on the Berach River, a tributary of the Banas, It was capital of Rajput State of Medapata (Modern Mewar) during 8th to 16th Century.

Chittorgarh is home to the Chittor Fort, the largest fort in India and Asia.

This is also the exit and the entry point from where the migrating Rabaris leave Rajasthan before they enter into the state of Madhya Pradesh.

Day 5: Oct 5— Chittorgarh
We will go out early in search of the Rabari groups which are now heading back to their villages in Rajasthan and all of them will pass from Chittorgarh. We personally know many groups and have photographed them before.

We may have to drive up to two hours in search of these migrating groups. We will spend as much time as we want with these groups.

Day 6: Oct 6— Chittorgarh | Jojawar
Today after breakfast, we will start our drive to Jojawar. A sleepy little town, full of colors markets and culture.

This afternoon we will drive to the near by villages and spend time with the locals.

Day 7 & 8: Oct 7-8— Jojawar
We will spend the days photographing the untouched Rajasthan!

Set amidst the Aravalli hills, this little garrison fort was once a major principality of the Royal house of Marwar. Bestowed with the title of Rao, the nobles looked after this little fiefdom for about two centuries after its construction in the 18th century.

We will also take around an hour-long local train sitting next to the locals. We will spend time exploring rural villages and getting closer to their lives.

Day 9, 10 & 11: Oct 9-11— Sirohi
This morning we will go out to explore the early morning life at the villages before we start our drive to Sirohi.

In Sirohi, we will stay at an ancestral property of Mr. Shailendra Singh, situated in the foothills of Mount Abu - it has been developed, maintained and nurtured with great care.

It offers a wondrous mix of natural beauty - rivers, mountains, greenery and picturesque sunsets. The local culture and tradition, the village folks and tribe offer a unique perspective and enhance the experience.

We will spend these three days with the Rabari community!

The community here is involved in raising cattle, camels, sheep and goats. They are semi nomadic living in tents or under the open skies and raising cattle, camels and goats, and have been travelling since ancient times using traditional routes to find greener pastures for their herds. Traditionally the Rabari followed a highly nomadic way of life, following the seasonal rains for periods of time, and then returning to their villages.

Day 12: Oct 12— Sirohi | Jodhpur
After breakfast, we will start our drive to the Jodhpur.

Jodhpur has a great ambience and vibe. Street dentists, barbers and the  Sardar Market are outside of the hotel.  Here you can photograph the merchants selling spices, antiques, cookware, and bangles galore. The piles of red chilli and bright orange turmeric as well as bright red tie-dyed scarves are visually captivating. As you walk the vibrant streets photographing you will be dodging roaming cows and men pulling carts loaded with vegetables and clothing.

Day 13 & 14: Oct 13-14— Jodhpur
In this famous city in the heart of Rajasthan, many of the buildings are painted a deep sky blue. We will start early in the morning for the photoshoot. We will climb to a rooftop and have an aerial view of the blue city. Afterwards, we will return to our hotel for breakfast. The group will venture out afterwards and we will walk in the small lanes and alleyways to witness the morning activities. These include people washing clothing, at prayer in the small Hindu temples, shopkeepers laying out their saris, and housewares and kids going to school in their brightly colour coordinated uniforms.

This afternoon we will visit the impressive Mehrangarh Fort, which is set on a 37m-sandstone hill built by Rao Jodha in 1459. From the top of the fort, one can get a bird’s eye view of the old city to the Jaswant Thada, an imposing marble cenotaph built in 1899 for Maharajah Jaswant Singh II, and smaller memorials to other Maharajahs of Jodhpur. Dinner will be on the rooftop of our hotel which looks out at the main square and clock tower

Arrive in Delhi
On your arrival in Delhi you will be met by our representative who will escort you to Novotel Aerocity (or similar) and assist in checking-in. (check in time 12 noon). After a long flight, the day is free to walk around or relax at the hotel.

​Departure
You will arrive in Delhi at 15:30 and will be transferred to the  Novotel Aerocity (or similar). You are free for rest of the afternoon so that you can get your late evening/early afternoon flight back home,

Visa
American citizens can obtain a visa for India online. The Indian eVisa application can be completed from home and is available 24 hours a day. American travelers must meet all the India visa requirements to be eligible. These include being in possession of a valid passport, an email address, and a debit or credit card.

Weather
The best time to visit Rajasthan is October to March as days are sunny, not too humid, with cooler nights. October-November is festival time, with Diwali, the Pushkar and Nagaur Camel Fairs.

Currency
The standard Indian rupee is the currency of India

There is no quarantine applicable to passengers arriving with negative RT-PCR report. Fly Safe!

Returning to the USA 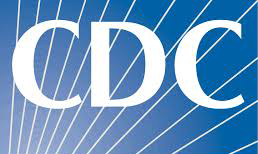 As per the US Embassy & Consulates in India, effective January 26, 2021, all incoming airline passengers to the United States ages two years and older must provide results of a negative COVID-19 viral test taken within three calendar days before travel. Alternatively, travelers to the United States may provide documentation from a licensed health care provider of having recovered from COVID-19 in the 90 days preceding travel. Check the US Centers for Disease Control and Prevention (CDC) website for additional information

Delhi Airport led the way to set up the first Airport COVID Lab offering RT-PCR facility to all arriving International passengers to avail an exemption from institutional quarantine. Now, after a successful phase-1 operation, the facility introduces upgraded packages for the benefit of all passengers.