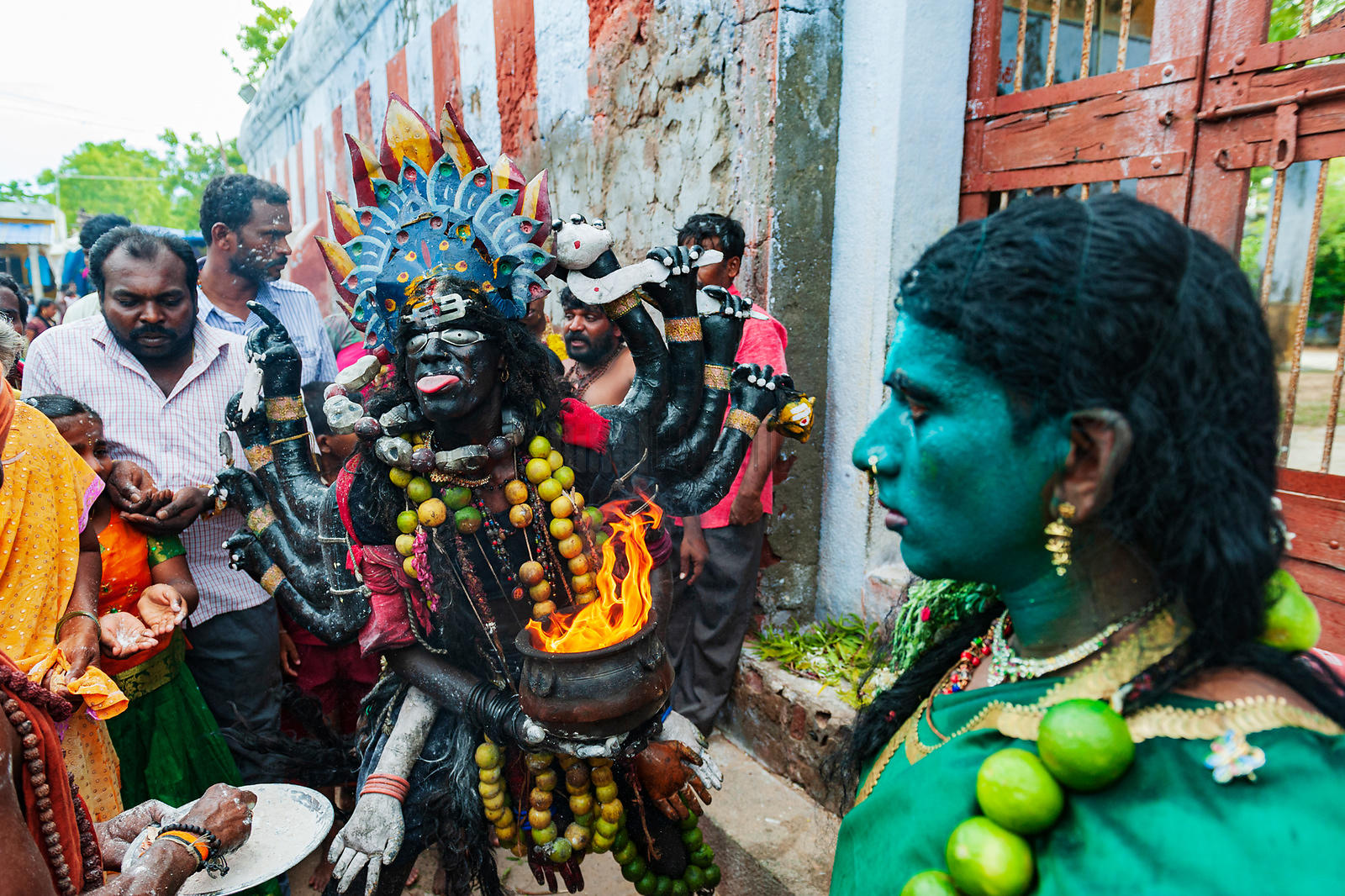 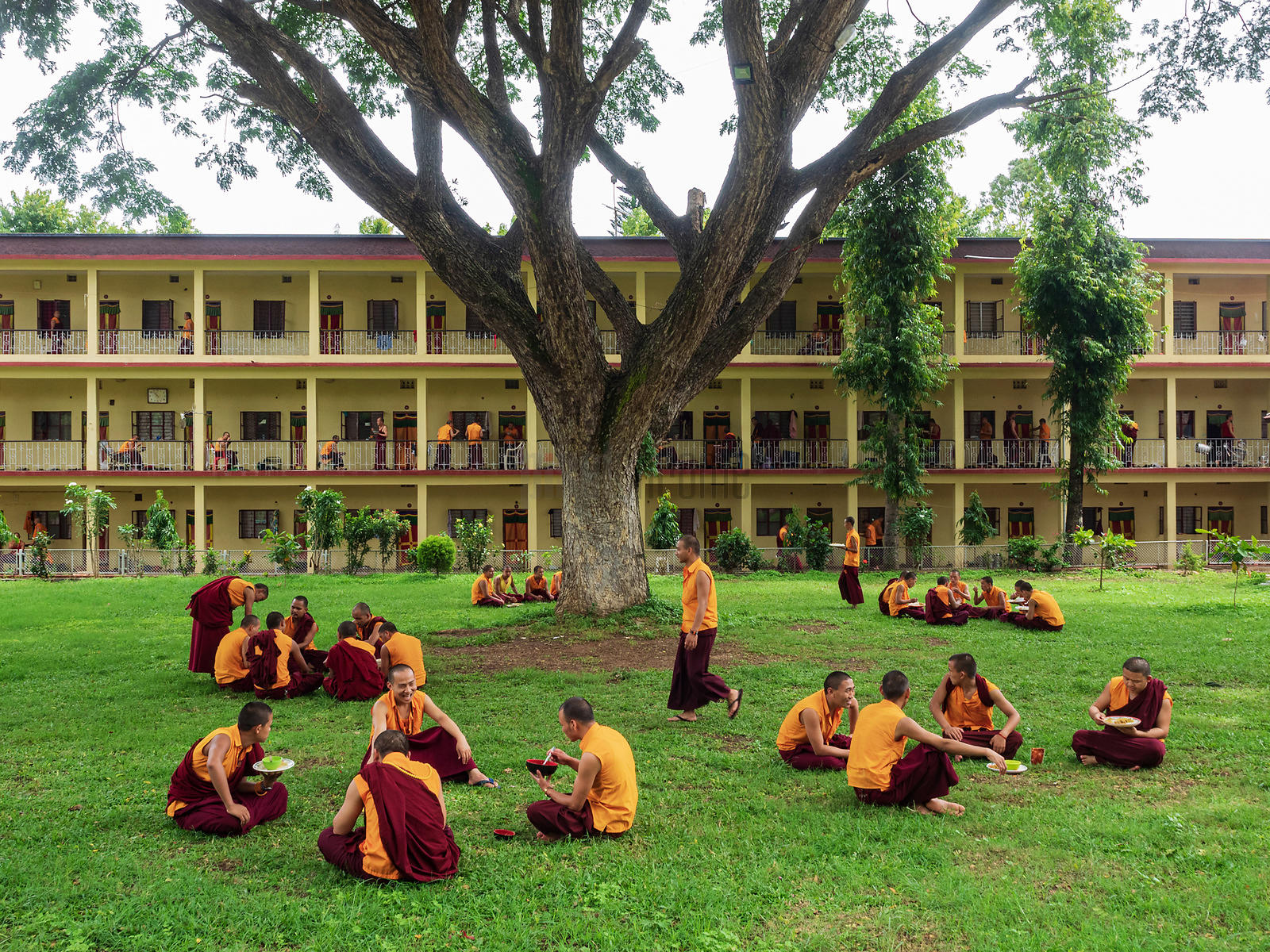 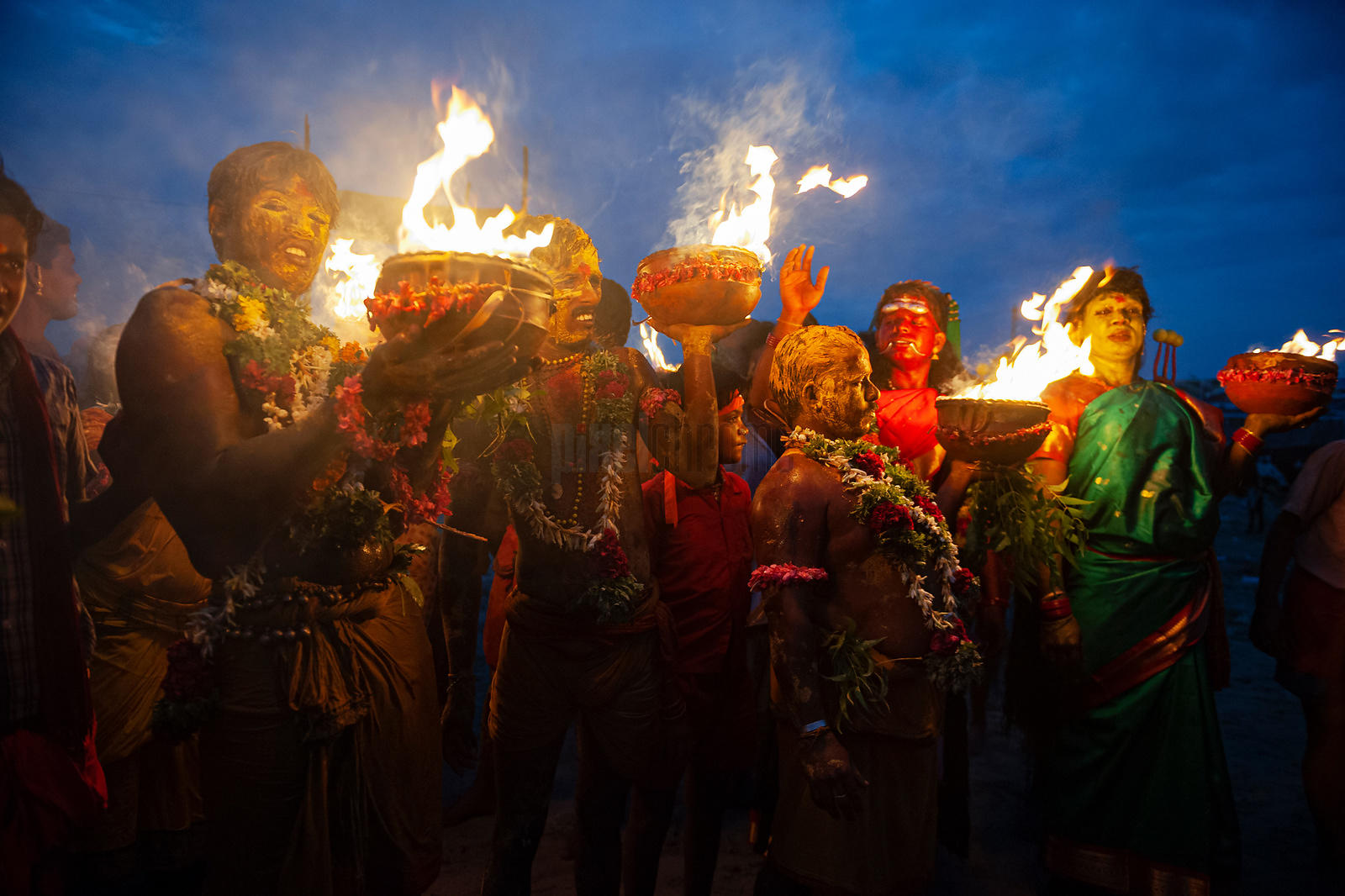 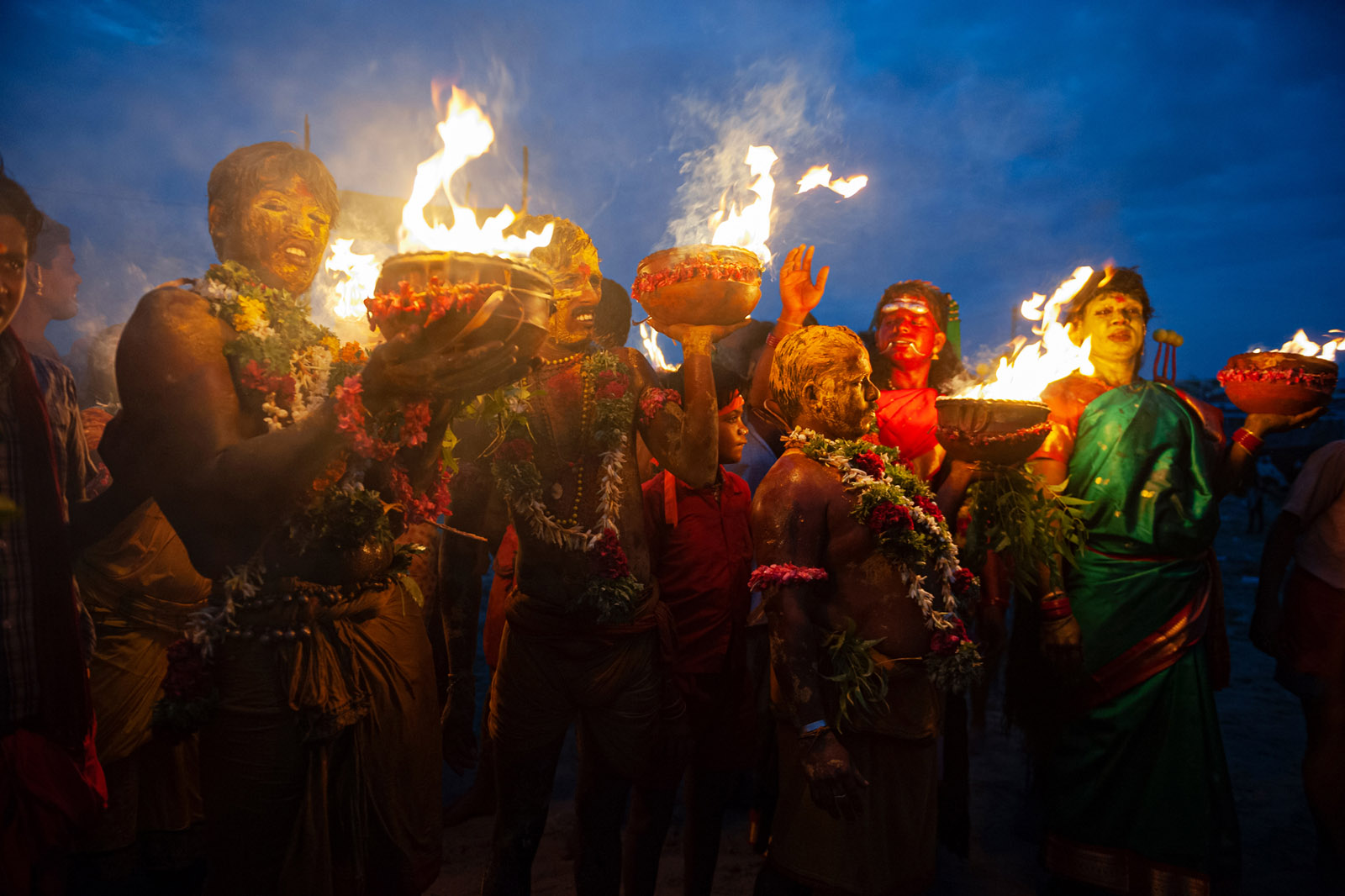 Dussehra, also called Vijayadashami, in Hinduism, holiday marking the triumph of Rama, an avatar of Vishnu, over the 10-headed demon king Ravana, who abducted Rama’s wife, Sita. The festival’s name is derived from the Sanskrit words dasha (“ten”) and hara (“defeat”). Symbolizing the victory of good over evil, Dussehra is celebrated on the 10th day of the month of Ashvina (September–October), the seventh month of the Hindu calendar, with the appearance of the full moon, an event called the “bright fortnight” (shukla paksha). Dussehra coincides with the culmination of the nine-day Navratri festival.

Pre-tour: Oct 2—Arrive in Chennai
If you are not participating in a combination of tours with us and are just beginning your journey in India, you should plan to arrive in Chennai on 2 Oct, 2022 where you will be met by an Eastbound representative who will escort you to your hotel where you will be assisted with check-in. (Check-in from 02:00 pm).

Day 1: Oct 3—Chennai | Tuticorin
We will take the first flight out to Tuticorin.

Tuticorin (Thoothukudi)
A paradise for nature and beach lovers, Thoothukudi or Tuticorin, as it is popularly called, is a great place to soak in Tamil Nadu's rich culture and history. The city is noted for pearl harvesting, salt production and fishing. Some of the popular tourist attractions in Thoothukudi include the Our Lady of Snows Basilica Church and a temple dedicated to Lord Shiva. The city is also home to one of the world's oldest seaports and numerous beach parks and parks in general.

Dussehra Festival
Signifying the triumph of good over evil, Dussehra is celebrated with much gusto and fanfare all over India. But, a sleepy coastal village deep in the heart of South India, Kulasekarapattinam, near Madurai, in Tamil Nadu, gives it its own twist. Devotees converge in Kulasekarapattinam from all parts of Tamil Nadu as they take to the streets in the village dressed as Goddess Kali and various other mythological characters!

The 12-day celebrations begin on the starting of the lunar cycle, and culminate on the day Dussehra is celebrated. The events take place in and around the 300-year-old Mutharamman Temple in the village, which is an important part of the town’s history. The beginnings of the festival was much more humble, but over the years the participation of many more villages and towns have given it a deeper significance and fervor. The vast stretch of seashore along the area plays a gentle host during the occasion and a general air of gaiety, excitement and festivity hangs in the air.

O/N GRT Tuticorin
Conveniently located on the Coromandel coast, this is the perfect place to explore the gorgeous city from.

Day 2 & 3: Oct 4 & 5—Tuticorin
The festival is extremely fascinating and astonishing; and literally there is a shot waiting at every second because of the sheer activity going on.

The loud singing, dancing, the garish demonic make-up, the outlandish clothes and antics, make for interesting and riveting photos. Some of the devotees also carry fire in earthenware pots and bowls, as fire is considered holy in Hindu mythology and is used during the festival to signify purity and the new beginnings it brings. On the last day the devotees bathe on the beach as a purifying ritual and discard their outfits and all the paraphernalia on the coast. Though Dussehra is celebrated all over India, the way it is celebrated in Kulasekarapattinam will stay with you for a long time to come.

You will be carried into the middle of the crowds, its frenzied worshipping as the theatre of the festival unfurls in a kaleidoscope of vivid colours! A number of villages and towns in Tamil Nadu field participants during the festival who divide themselves into groups of 6-10 people. These people dress up as mythological characters, saints, Goddess Kali (complete with artificially attached ten arms, garish and loud coloured make-up and outlandish costumes) for the extra dramatic effect. An accompanying orchestra team that loudly announces their arrival and presence further enhances this procession. Another phenomenon during the festival is that most people get into the spirit of the character completely; and go into a hysterical trance during the festivities!

The devotees also roam around in surrounding villages, asking for alms and donations from every home; which they offer on the final day at the main temple.

This morning we will start our drive to Madurai.

Madurai is located on the banks of river Vaigai. This ancient city is about 2600 years old. This city is referred to as the Athens of the East. This is the place where the tradition of the Tamilians got its emergence and grew popular. The Tamil literature flourished due to the kings, nobles and poets who dwelled in this part of the ancient Tamil Nadu. The three Tamil Sangams evolved and flourished here. According to mythologies and history, this is the oldest city of Tamil Nadu. Ramayana and Arthasasthra the great epics had something to do with Madurai.

The temple complex is within a high-walled enclosure, at the core of which is the two sanctums for meenakshi and Sundareshwara, surrounded by a number of smaller shrines and grand pillared halls. Especially impressive are the 12 gopuras. Their soaring towers rise from solid granite bases, and are covered with stucco figures of dieties, mythical animals and monsters painted in vivid colours.

Day 5: Oct 7 | Madurai
We will start the photo walk of this iconic city with its small markets, traditional artisan workshops, small temples, near by small villages and Vedic school.

Evening will be spending around the colorful market of the Meenakshi temple. This temple the enormous temple complex is dedicated to Shiva, known here as Sundareshvara and his consort Parvati or Meenakshi. The original temple was built by Kulasekara Pandya, but the entire credit for making the temple as splendid as it is today goes to the Nayaks. The Nayaks ruled Madurai from the 16th to the 18th century and left a majestic imprint of their rule in the Meenakshi -Sundareswarar Temple.

Day 6: Oct 8 | Madurai | Bangalore | Bylakuppe
This morning we will fly to Bangalore; on arrival we will start our drive to the Bylakuppe monastery. Bylakuppe is home to several Tibetan settlements, established by Lugsum Samdupling in 1961 and Dickyi Larsoe in 1969. Bylakuppe is the second largest Tibetan settlement in the world outside Tibet after Dharamshala, which is in north India. It is located to the 155 miles west of Bangalore.

In 1960, the Government of Mysore (as Karnataka was called at that time) allotted nearly 3,000 acres (12 km2) of land at Bylakuppe. This was followed by the establishment of three more settlements in Karnataka state making it the state with the largest Tibetan refugee population.

The Government of India built special schools for Tibetans that provide free education, health care and scholarships for those students who excel in school. There are a few medical and civil engineering seats reserved for Tibetans. Tibetans live in India with a stay permit, which is processed through a document called Registration Certificate (RC). It is renewed every year, or half-year in some areas. Every Tibetan refugee above the age of 16 must register for the stay permit. RCs are not issued to new arrival refugees. The Indian Government also issues "Yellow Books" after one years' processing with a RC, which allow Tibetans to travel abroad which is an Identity Certificate.

We will spend the evening in and around the monastery.

O/N Purple Palms Resort, Bylakuppe (or similar)
Escape to the ‘country of a million hills’ at the heart of South India. It’s magical Coorg, also known as Kodagu. Let yourself be mesmerized by the mighty Western Ghats draped in endless greenery crowned by mist. Inhale the refreshing aroma of coffee and spices in their purest form. Let loose your adventurous side with white water rafting in the gushing Cauvery river. Soak in the vibrant culture of the Kodavas, the natives of Coorg. Then, retreat to a world of bliss at Purple Palms, one of the best resorts in Coorg.

Day 7: Oct 9 | Bylakuppe
We will spend the entire day photographing in and around the monastery and the Buddhist settlement.

Day 8: Oct 10 | Bylakuppe | Kabini
This morning we will start our drive to the Kabini Wildlife Sanctuary part of the Nagarhole National Park. Lush all year round, the jungles of Nagarahole are mystically beautiful with their deciduous forests.

The Kabini river makes the perfect foil to the visually stunning home of the leopards that roam freely. Making its way like a slithering snake through the Nilgiri Biosphere, the Kabini river is home to the diverse flora and fauna of the region. The river spreads its bounty all year-round; in the summers hundreds of elephants come to thirstily drink water, in winters, flocks of birds throng to its bank and it bursts into a green paradise during the rainy season.

Kabini will show you all its moods—from broody to placid, calm to raging and in all its colors and textures, which will compel you to examine life and its philosophy in all its nuances; but most all the truly sustainable ecologically heritage we all are lucky to inherit. Kabini will not just make for great photographs; but will continue to inspire you to make good images for a long time to come.

O/N Serai Kabini Resort
The Serai Kabini is only 220 kms away, making it a perfect weekend getaway from Bangalore. The nearest airport is in Mysuru (75 kms away). Located on the Southeastern end of Nagarhole National Park, Kabini is home to one of the largest numbers of elephants in Asia. The river attracts these majestic animals in big herds. Besides, over 300 species of birds are spotted throughout the year.

Day 9 - 12: Oct 11 - 14 | Wildlife Photography in Kabini
We will spend our time in Kabini forest with two safaris a day - one early in the morning and one later in the afternoon.

Day 13: Oct 15 | Kabini - Bangalore | Final Departure
After breakfast we will start our drive back to Bangalore. Your rooms are booked till your departure.

Later in the evening you will be transferred to the International Airport to board your flight back home.

If you are following on with the extension to Kolhapur to photograph the Turmeric Festival and the Kushti wrestlers, please follow the link Haldi, Kushti & Mumbai

Average Weather in November in Mysore 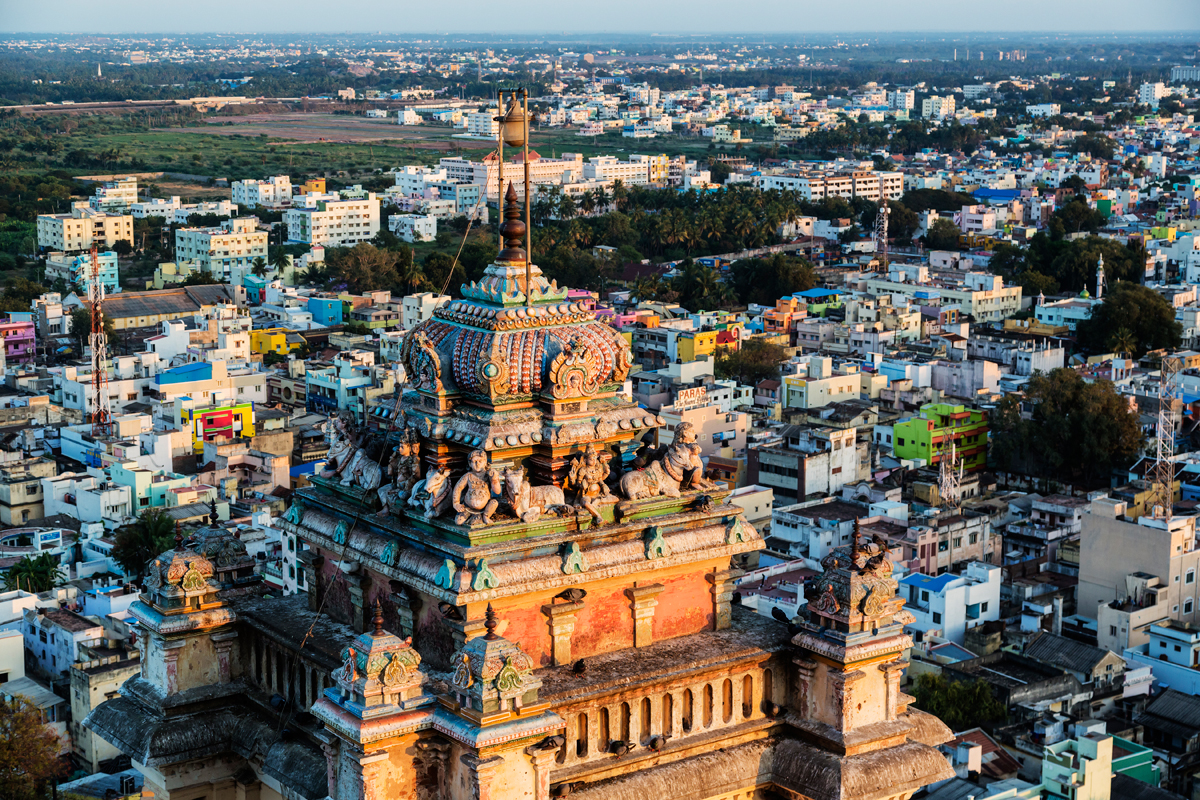