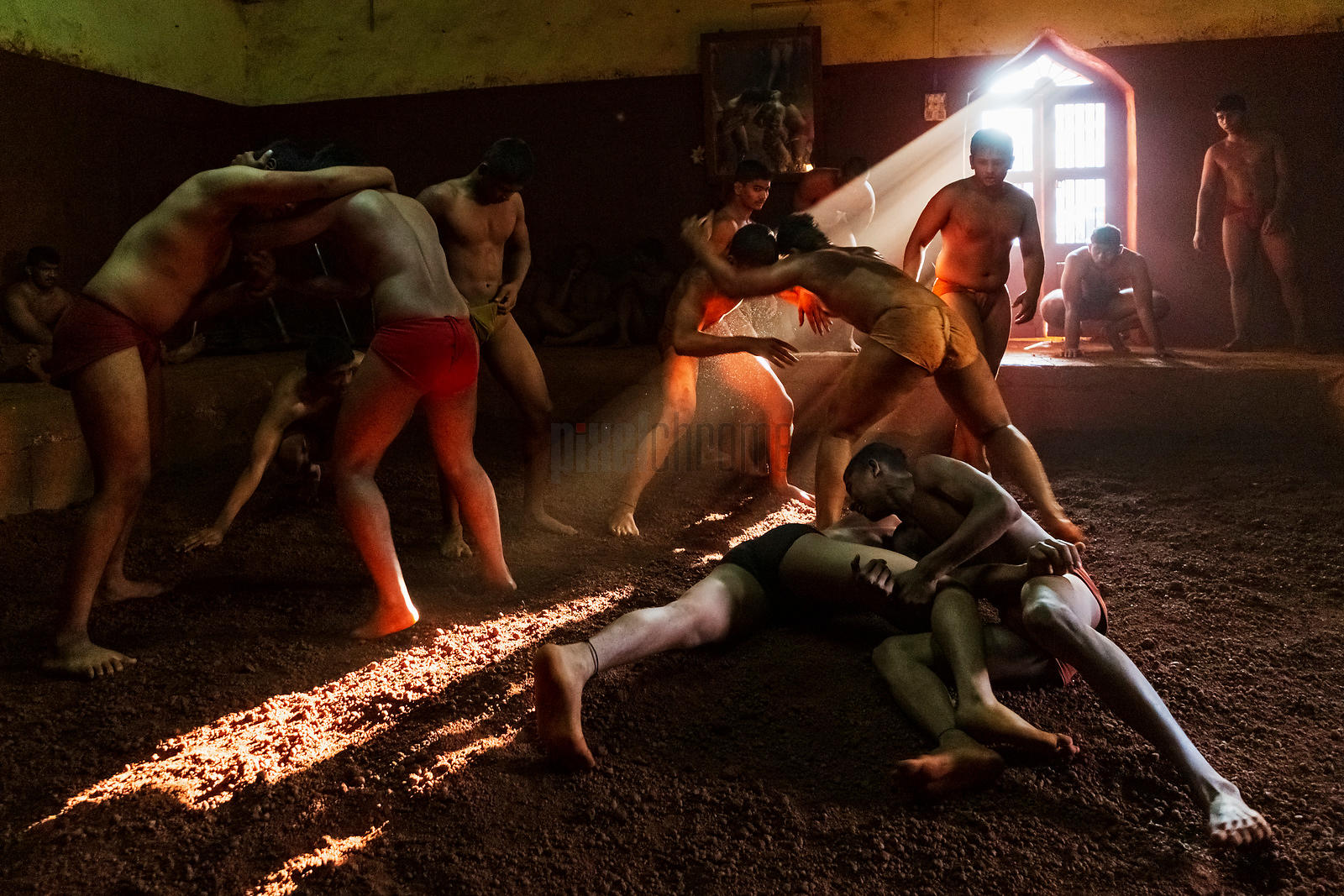 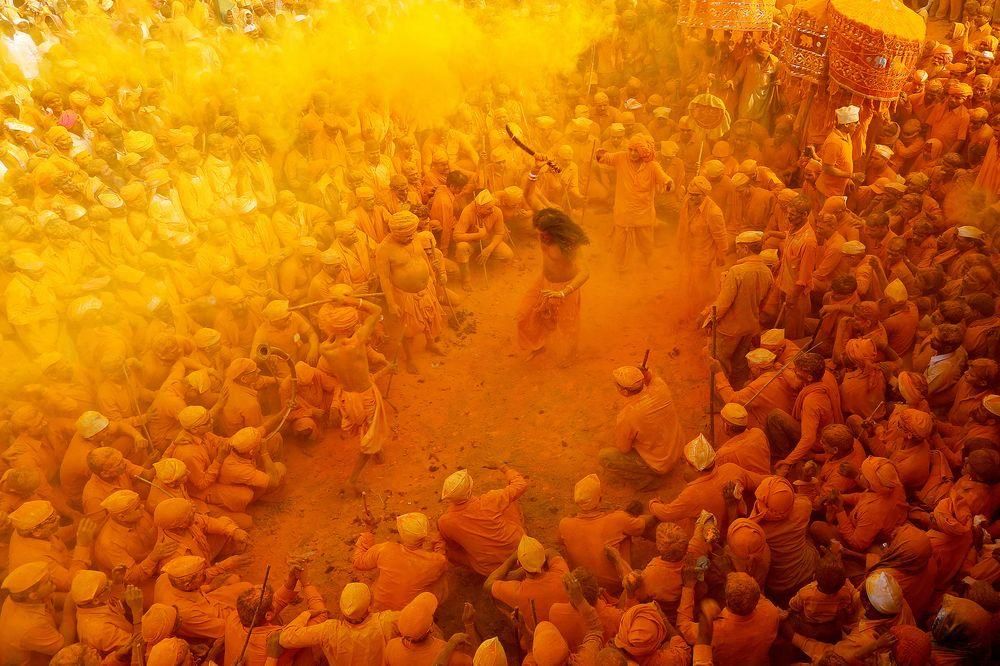 Kolhapur has a long history of kushti (wrestling) and has produced many noted wrestlers. The sport flourished during the reign of Chattrapati Shahu Maharaj (ruled 1894–1922), remembered for being a progressive ruler who brought about many social reforms. During this golden age, Shahu Maharaj built akharas all over Kolhapur and organized wrestling tournaments, inviting legendary wrestlers from across undivided India. Since then, Kolhapur’s wrestling culture has been dominated by Gangavesh Akhara, Shahupuri Akhara, Motibag Akhara and New Motibag Akhara. In each of these akharas, more than 70 wrestlers undertake taleem, or training. Hence, the akhara is colloquially, also known as taleem.

During this time of the year, the city also offers a very unique festival for us to witess and photograph. Every year for four days, the village of Pattan Kodoli, in Maharashtra’s Kolhapur district, turns yellow with clouds of turmeric. Such is the festival of Vittal Birdev Yatra, which marks the birth anniversary of the community’s deity, Vittal Birdev Maharaj. This year, the celebrations last from October 17 - 20, with men, women and children showering each other in turmeric.

The highlight of the festival is a ‘baba’, who arrives at the village to make predictions about the forthcoming farming and weather conditions for the village. The baba, Sri Keloba Rajabau Waghmode, hails from the Anjungau village in Solapur district. He walks on foot for 17 days from his village to reach Pattan Kodoli, where he is welcomed with huge umbrellas, and a musical procession. He sits under a banyan tree and has people anoint him with turmeric and dry coconut powder.

On the second day, he enters the Shri Vittal Birdev Temple. As the beats of the drums pick up, he dances, and makes his predictions in Kannada, which is then translated into Marathi by the temple priest. On the fourth day, the festivities draw to a close and the baba starts his journey back to his village. 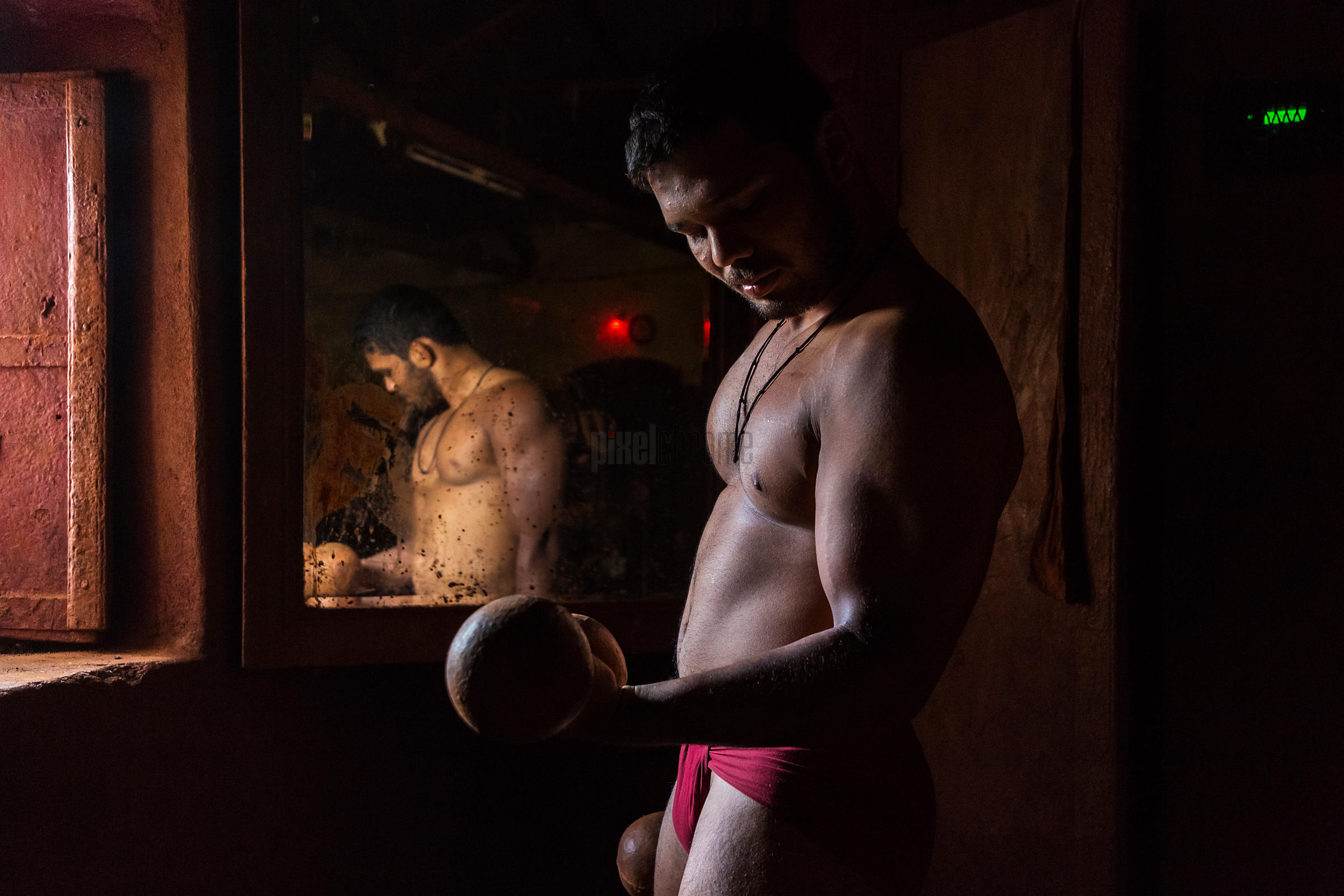 Kushti Wrestler Working Out with Weights

Day 1: 16 Oct—Fly from Delhi to Kolhapur or Pune (depends on the connection)
On our arrival, we will be met by our local guide and we will be taken to our hotel to relax before the activities of the next few days

Day 2: 17 Oct—Kolhapur
After an early start we will drive to one of the most famous Kushti akharas (gym) where we will watch the wrestlers exercising in their traditional space as the sun is rising casting beams of light through the door. In the afternoon we will visit another akhara which will give you a different perspective.

Day 5: 20 Oct—Pune | Mumbai
Today we drive to Pune to catch our flight back to Mumbai. As our hotel is located in a historic district in Mumbai we will be able to have easy access to sites like the Gate of India at sunset
O/N Fariyas Mumbai
Fariyas Hotel in Mumbai is one of the foremost 4 star hotels in Mumbai (Colaba). It is among the few business hotels in South Mumbai
Day 6 & 7: 21-22 Oct—Mumbai
Early this morning we will start our very first photo walk. This will give you a chance to get comfortable with India’s energy and pace of life and acclimatize to its people and surroundings.
You have the option today to see a very unusual side of the city. Whilst Mumbai is a busy city during the day, the early mornings reveal a completely and less frenetic face of the city. We will start the tour at sunrise stopping at the Victoria Terminus station where the city's newspapers are assembled every morning for delivery to the city and suburbs; milk vendors cycling with their huge canisters of milks and bread being transported from the bakeries to retail outlets through the city. The colorful and aromatic wholesale flower market before ending at the Crawford Market, arriving as the fruit and vegetables arrive. It Is believed that 3000 tons of produce are traded here every day
We will return to hotel for breakfast followed by the trip to Dabbawallahs.
We will drive to the Churchgate Station to watch a very typical Mumbai trade—the Dabbawallahs. These are the men who are key in keeping the white collar work force of Mumbai fed, delivering over 200,000 home cooked meals collected from homes in the distant suburbs and always delivered right on time to the right person. Using a system of colors and codes, the Dabbawallahs meet in front of Churchgate station, rapidly segregate the steel Tiffin carriers (which all look exactly the same) into areas and depart with their load. Their time management and operations is impeccable, resulting in a Six Sigma rating by Forbes Global and study done by Harvard
We will have lunch at a local restaurant followed by time to relax at the hotel.
Later we will explore the historic Kala Ghoda Area, the heart of the Fort Mumbai area. A feast of architecture ranging from Gothic to art deco, the area is a lively area to explore on foot, Street vendors, cafes, galleries, local cricket matches and food stalls all find place to exist in this area. The tour will end at the soaring Victoria Station, a land mark of the area. A UNESCO world heritage site, it is a busy station for both local commuter and national rail services. Once again it is a great place to photograph people.
O/N Fariyas Mumbai
Day 8: 23 Oct—Mumbai
In the early hours of the morning you will be transferred to the International Airport to board your flight back home.

Average Weather in Maharastra in

October, the first month of the post monsoon autumn, in Kolhapur, is a tropical month, with average temperature ranging between min 21°C (69.8°F) and max 30°C (86°F). 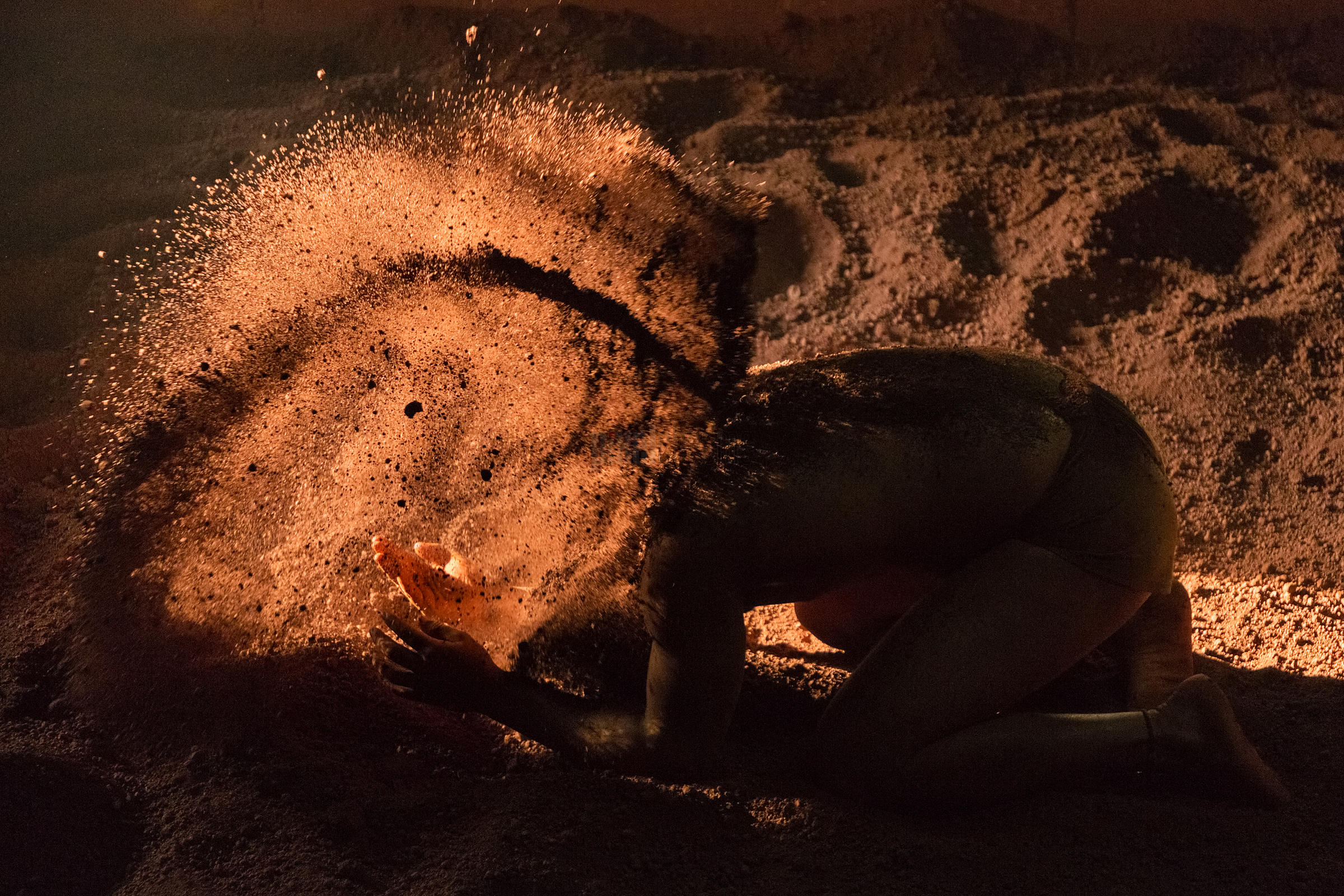 Kushti Wrestler Applying Red Sand to his Body Before Practice