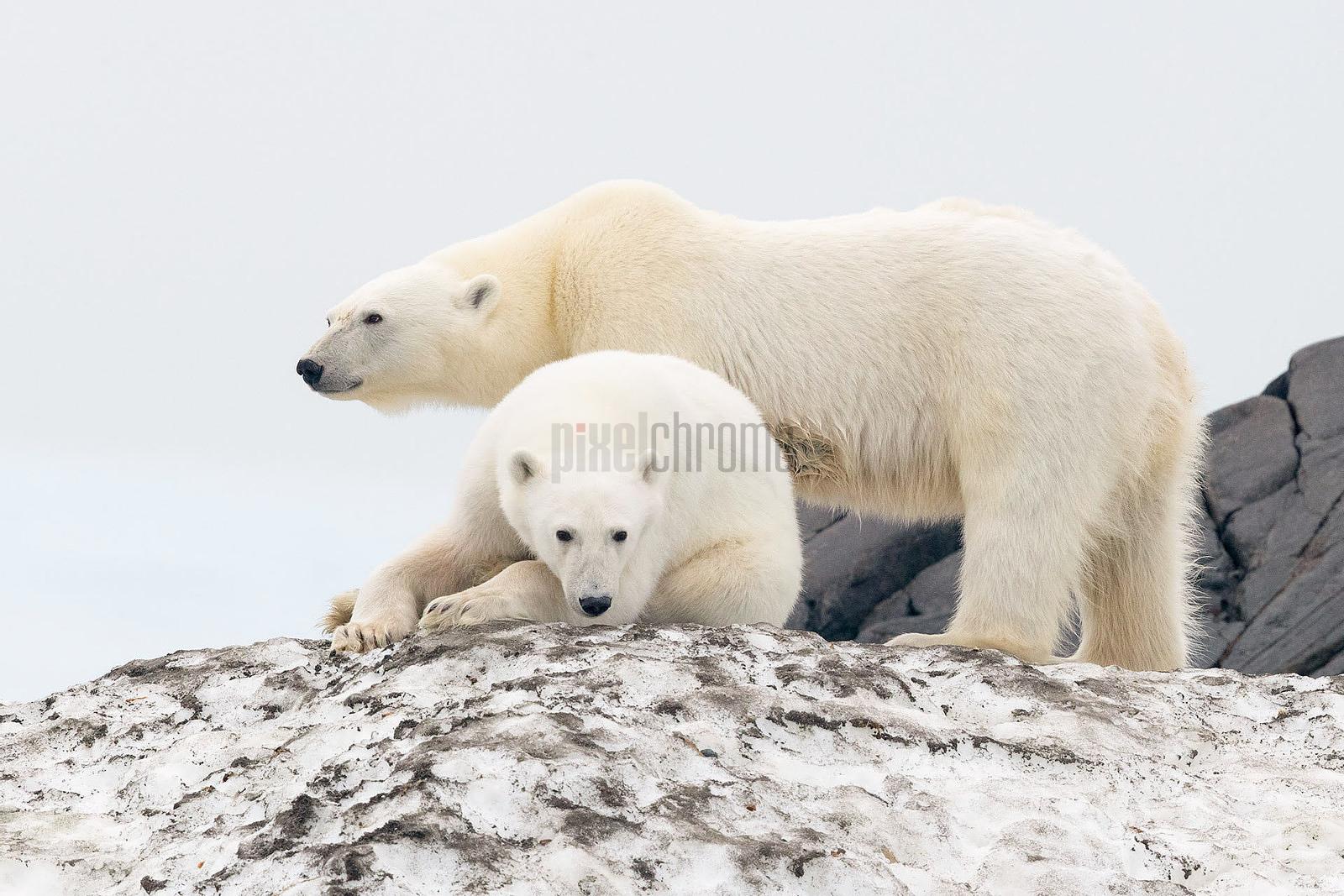 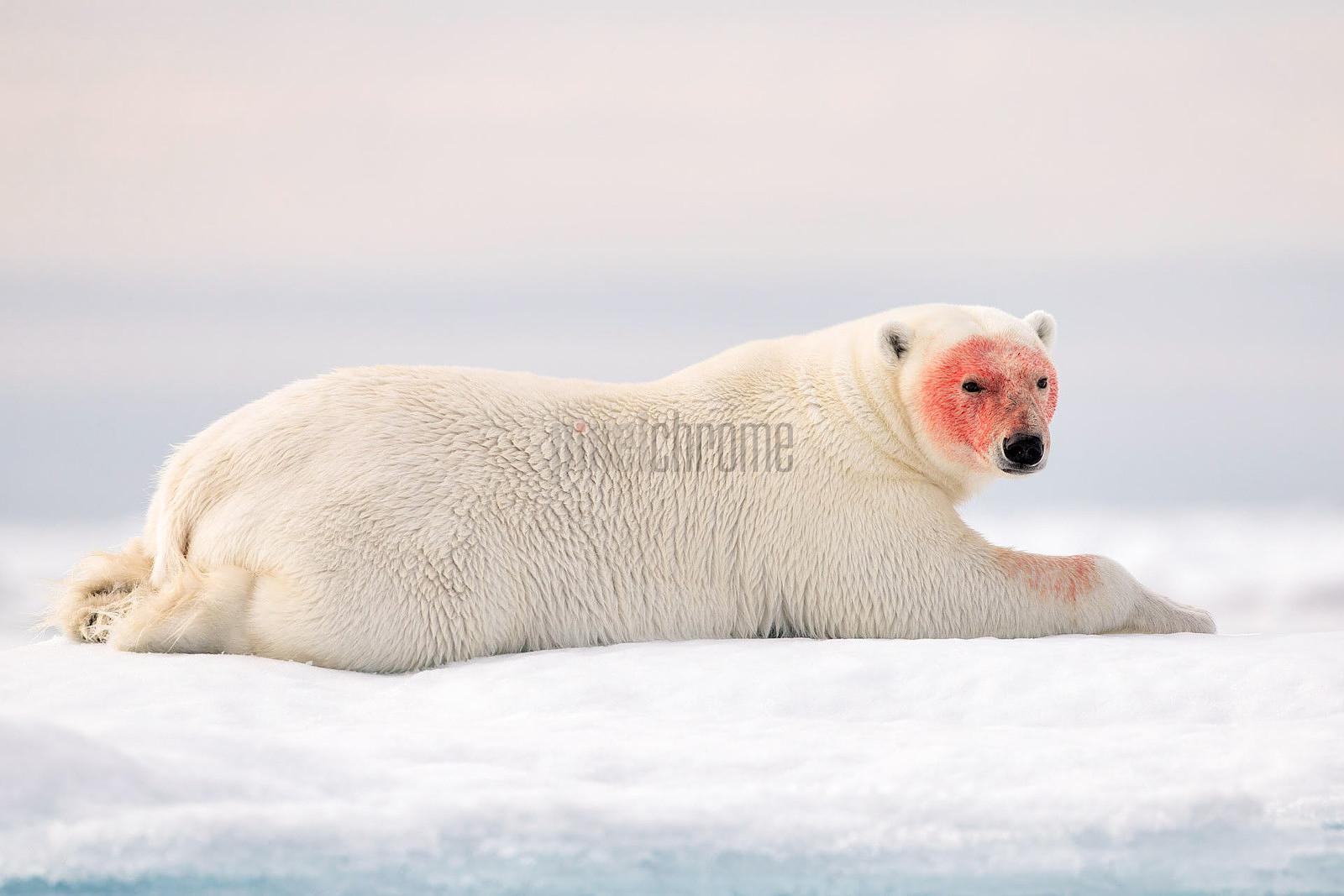 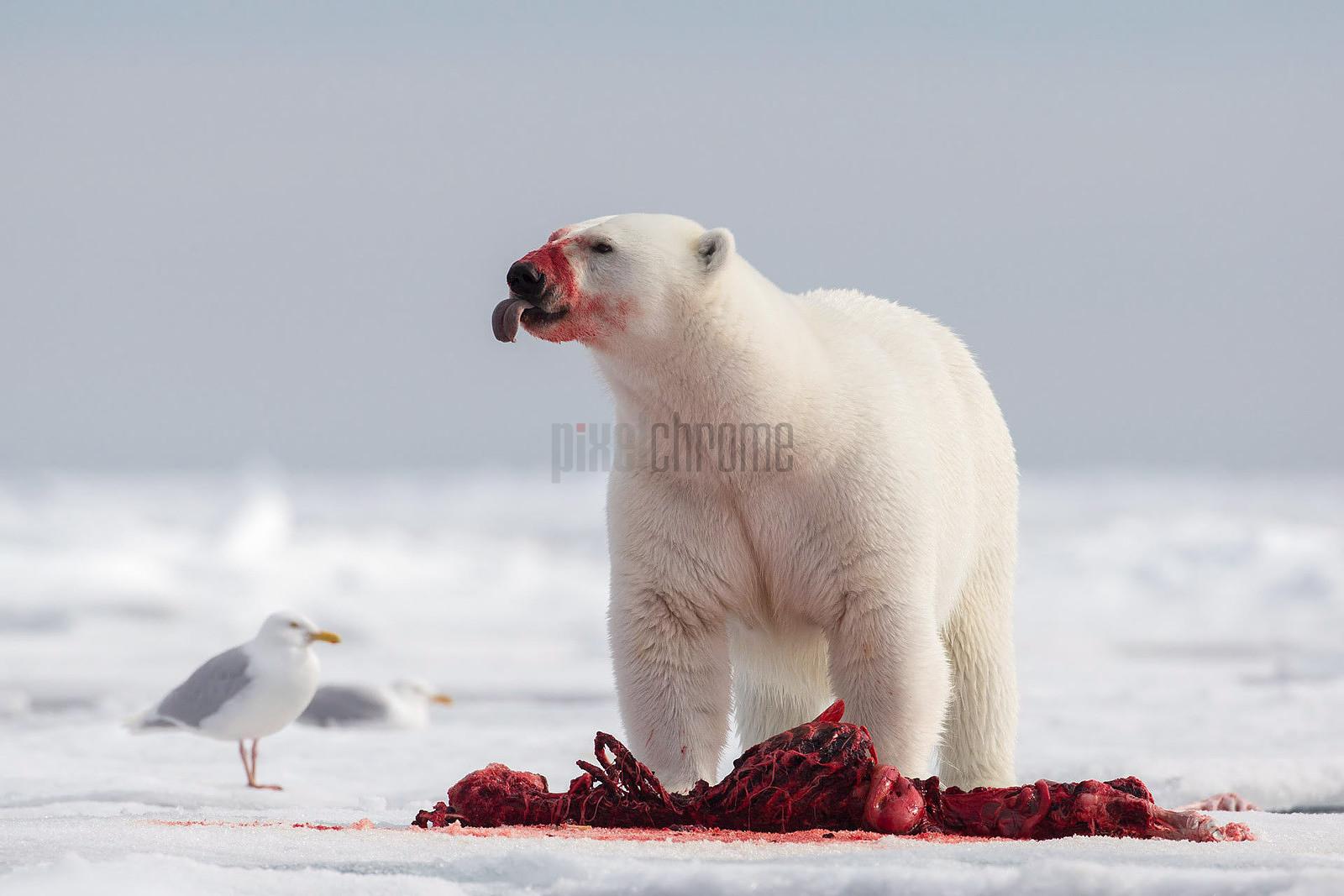 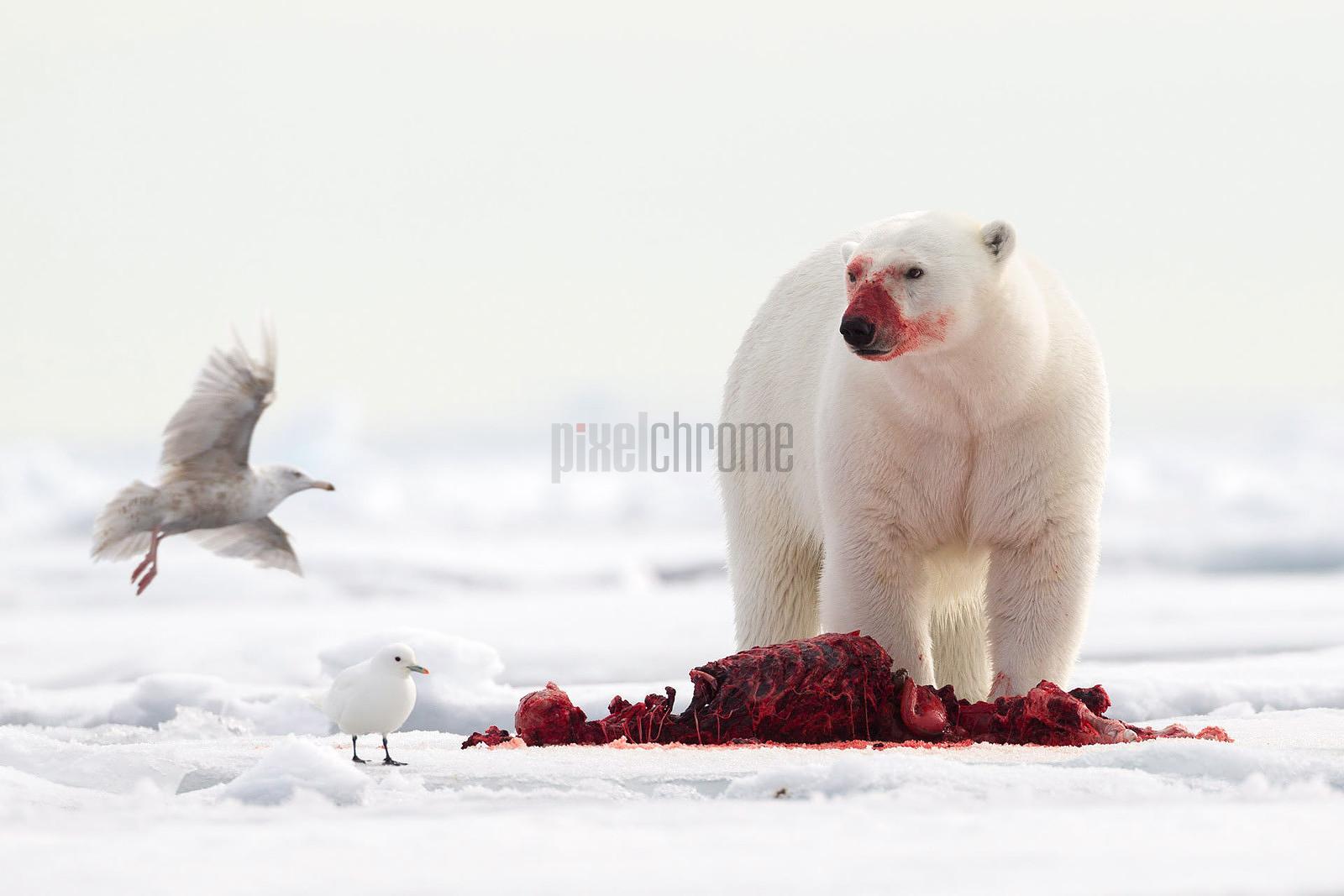 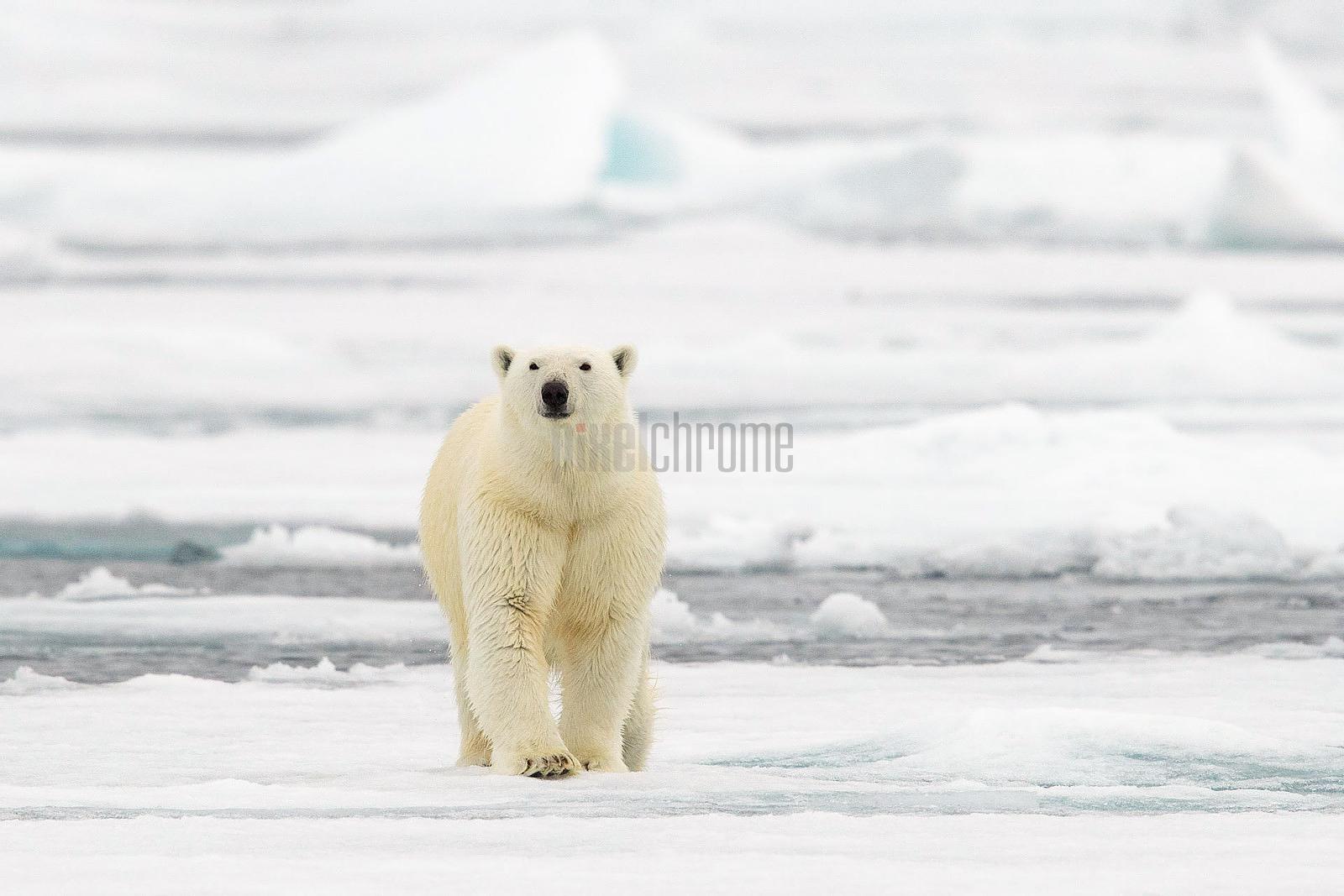 Daniel Bergmann has offered me spaces on this once in a lifetime tour to Svalbard. He has chartered a private ship which means that we will have complete control on all photography activities, locations and landings. With the relatively small group of just 18 participants, 2 leaders and a local guide, you will not be competing for space as is the case on some of the larger vessels which venture out into this region.

The High Arctic is a place to inspire the imagination. Nowhere is it more accessible than the Norwegian archipelago of Svalbard, located deep within the Arctic Circle. Follow in the footsteps of the great explorers and join photography tour leaders Daníel Bergmann, Mark Buckler, Jeremy Woodhouse plus Morten Jørgensen, one of Svalbard’s most experienced expedition leaders, on a unique expedition to one of the most fascinating photography locations on our planet.

​This expedition is for a limited number of just 17 participants. One of our main goals will be to find and photograph Polar Bears, in its natural habitat out on the pack ice, and Svalbard has historically been one of the most reliable places for that. Our success will depend on the ice condition and it’s location. In some years the ice is just off the northern tip of Svalbard while in other years it has retreated too far north to make it possible to sail there. In the case of the latter we will search for Polar Bears that are on land in the northeastern part of the archipelago, where they are sometimes seen hunting on ice in front of glaciers. This is an expedition into a changeable environment and the element of surprise. The discovery of what wildlife is found where and when is a major part of the Svalbard experience.

Upon leaving the small town of Longyearbyen we will know what location we will first aim for but our plans might change with what we find and with the ice and weather we encounter. Although Polar Bears are on the top of our list of photography subjects, the full Svalbard experience is about so much more than the iconic Arctic predator. We will have 10 days to explore the islands and with crew that is able to operate the ship around the clock we can cover a great deal of terrain if we so choose. We might even circumnavigate Spitsbergen, Svalbard’s largest island –something that was not possible a few years ago due to ice.

We will be using the ice hardened expedition ship M/S Freya that will enable us to skirt the edge of the pack ice if it will be within reach. Freya is widely regarded as one of the best ships in the Arctic for wildlife photography. With low-lying decks it is possible to photograph Polar Bears, Walrus, other sea mammals and birds closer and lower than on most other ships. Our expedition ship is also equipped with a sufficient number of zodiacs for all photographers to be shooting simultaneously.

We have 24-hour daylight in July. This gives us opportunity to enjoy some long days with an extended flexibility of the program. We may add extra landings or Zodiac excursions, and we may shift some mealtimes to make extra use of opportunities provided. The weather can be anything, but freezing daytime air temperatures are infrequent. The fjord ice remains in some areas in some years, other times or at other glacier fronts there is now access right up close. Many landing sites are now quite negotiable after the snowmelt.

July is a good time for migrant birds, which includes just about all Svalbard birds however species such as King Eider and Grey/Red Phalarope are best seen before late June, when they are around in flocks before being able to pair out on the tundra. To some extent this is true also of Brent/Brant and Pink- footed Geese. Also the endemic Ptarmigan subspecies is easy to find in July. It is a good time also for vagrants. But all else is pretty much in place, and the colonies of auks and kittiwakes etc are buzzing. Some years, sea-ice prevents much progress east, and the largest colonies remain out of reach – Little Auks (Dovekies) are however within reach on the west coast, and usually Brünnich’s Guillemot (Thick-billed Murre) too (even if not always the largest colony).

Polar Bears are present year round in Svalbard. In July, the cubs of the year are about 7 months old, still with their mothers. Those cubs that have reached 2.5 years of age are off on their own for the first time in their lives. Sometimes we meet these young, newly independent bears – they are often extra inquisitive. Where we see Polar Bears depends a lot on the sea ice. Some years, there is still a lot of sea ice in July, meaning that we find the bears there. Other times, the sea ice has melted back so far that many bears are stranded on shore for the summer. In such years, we can travel far to the east and northeast, and here we often see bears roaming the shores, or even riding small icebergs.

We will make a number of walks across the tundra, watching the Reindeer feed, Arctic Foxes go about ther daily life and the geese and Arctic Terns attending to their young, and the flowers adding colours. We shall also be going out in the inflatables, to explore wildlife, glacier fronts and coastal scenery up close.

You will have a daily program designed to maximize the wildlife and wilderness opportunities that are available. No two expeditions are ever the same. No two sailing routes are the same. The weather always changes. The location of the ice is unpredictable. The wildlife is – just that – wild! What will ensure a unique and extraordinary experience for all participants is the expertise of the guides and the crew combined with everybody’s flexibility and expeditionary spirit.

Places we may Visit 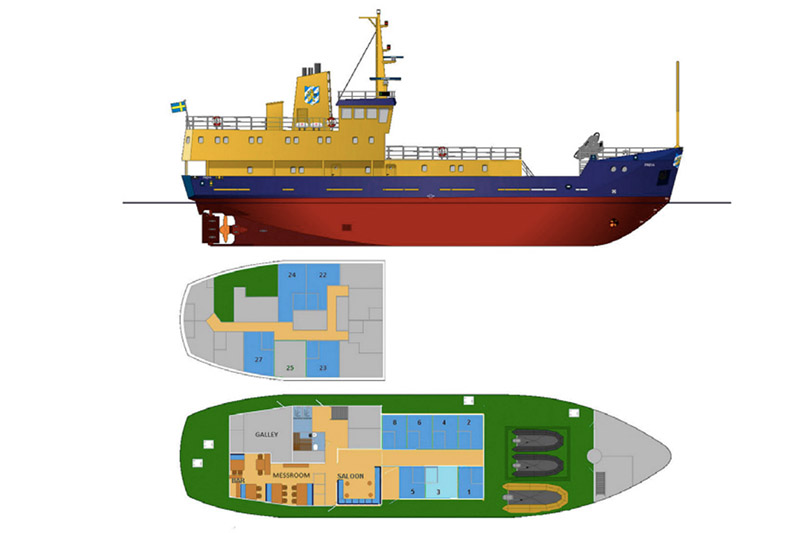 With a 1360 HP engine, the highest ice class possible, and certification for unrestricted trade, the M/S Freya is an excellent and very useful expedition ship. From 2017, it has a capacity of 24 guests and 2 guides (but we will have a group of only 21 total with guests, leaders and guides).

M/S Freya was originally built in 1981 for the Swedish Maritime Administration as the light house building vessel “FYRBJÖRN”. She is built to fall into Lloyd’s class for unrestricted trade, and has the highest ice class 1A. The vessel was rebuilt and extended with five meters at Holms ship yard in Råå 1995. In the Falkenberg Yard, she was converted into an expedition ship in 2015 and renamed “Freya af Göteborg”.

M/S Freya meets all standards and requirements regarding maritime safety and navigation. She carries three Mark V Zodiacs for guest use.

M/S Freya has six lower-bunk double cabins and four triple cabins (the third bunk folds up/ down), all with en-suite facilities. The public areas consist of a lecture room / salon (shared with the crew), a dining and bar area, an aft deck with furniture, and further good amounts of deck space behind the bridge, on the sides and in front of the superstructure, and on the bow.

The cost for the expedition is from $13,000 (USD) for a berth in a twin share cabin with en shite facilities. We willl board the ship at 16:00 on the 24 July and disembark at 09:00 on the 3 Aug. All meals are included but drinks (other than water, tea and coffee) are excluded.

The meals onboard shall consist of breakfast, lunch, afternoon tea/ coffee and two course dinner (three course dinner the last evening). Coffee and tea will be available 24 hours a day. The mealtimes shall be held at regular times, but the catering crew has been informed that photography has priority on this expedition and flexibility is necessary.

Arrival & Meeting Place
SAS and Norwegian fly to Longyearbyen in Svalbard from Oslo. We strongly recommend you arrive to Longyearbyen at least one day before the ship departs in case of lost luggage or delayed flights. There are a number of nice hotels in Longyearbyen and day tours can be taken out of town with local operators.​
​Departure
Visa
Not needed