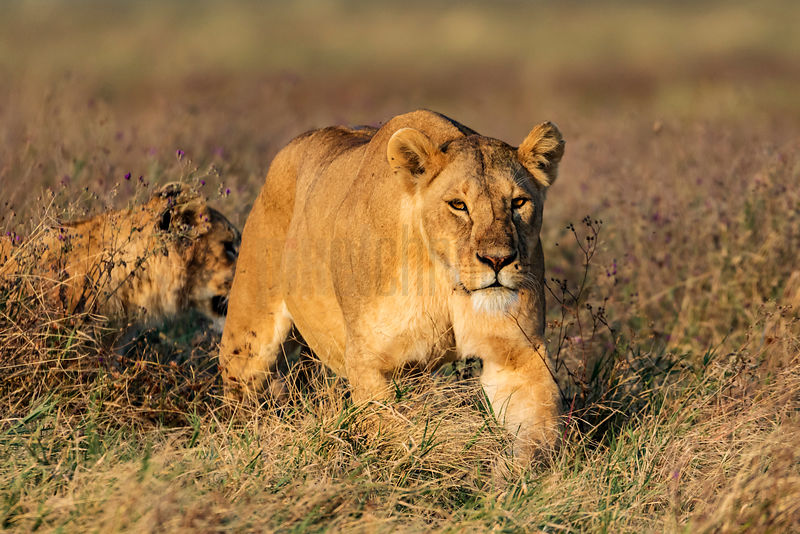 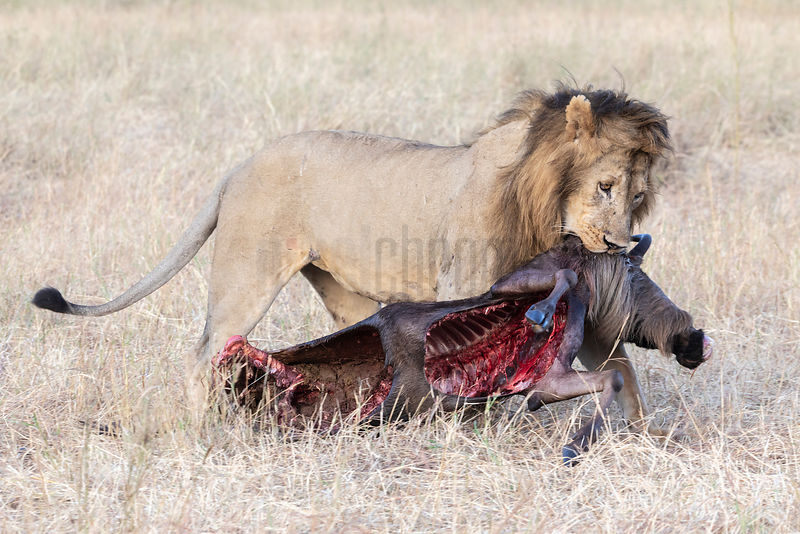 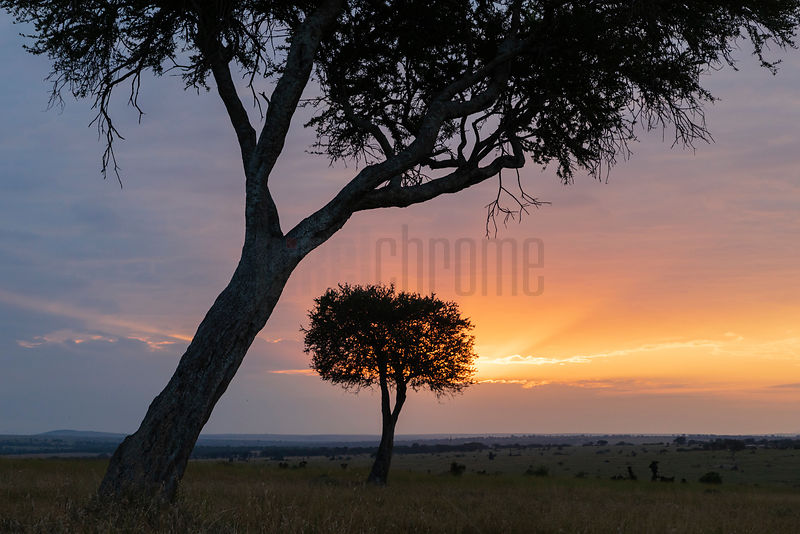 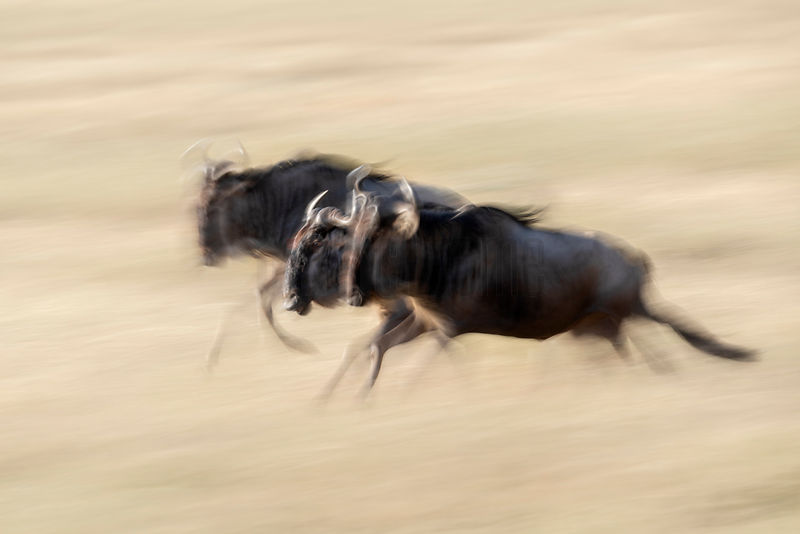 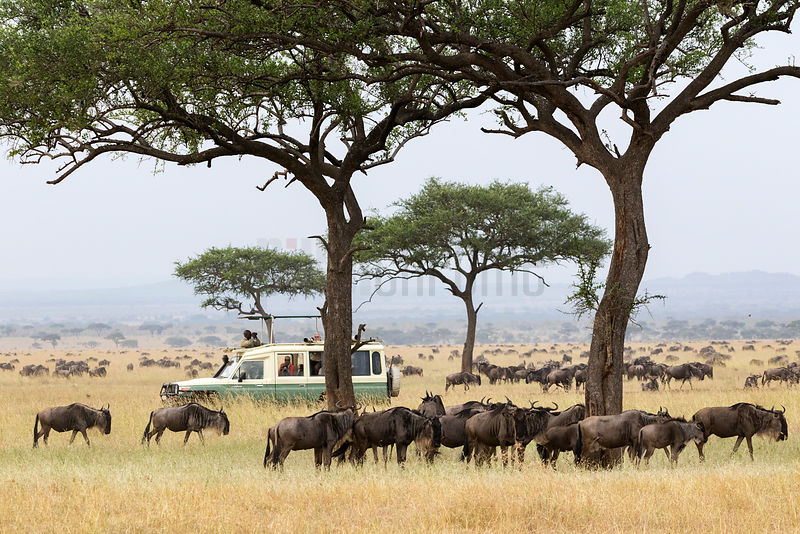 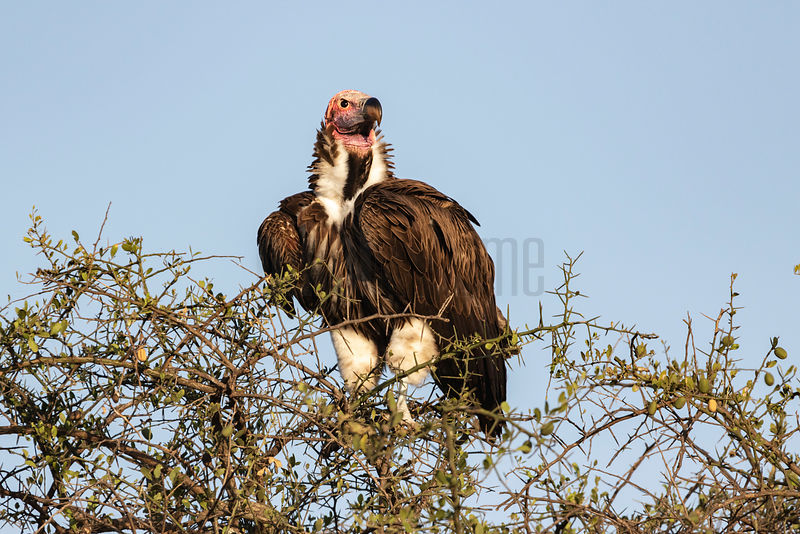 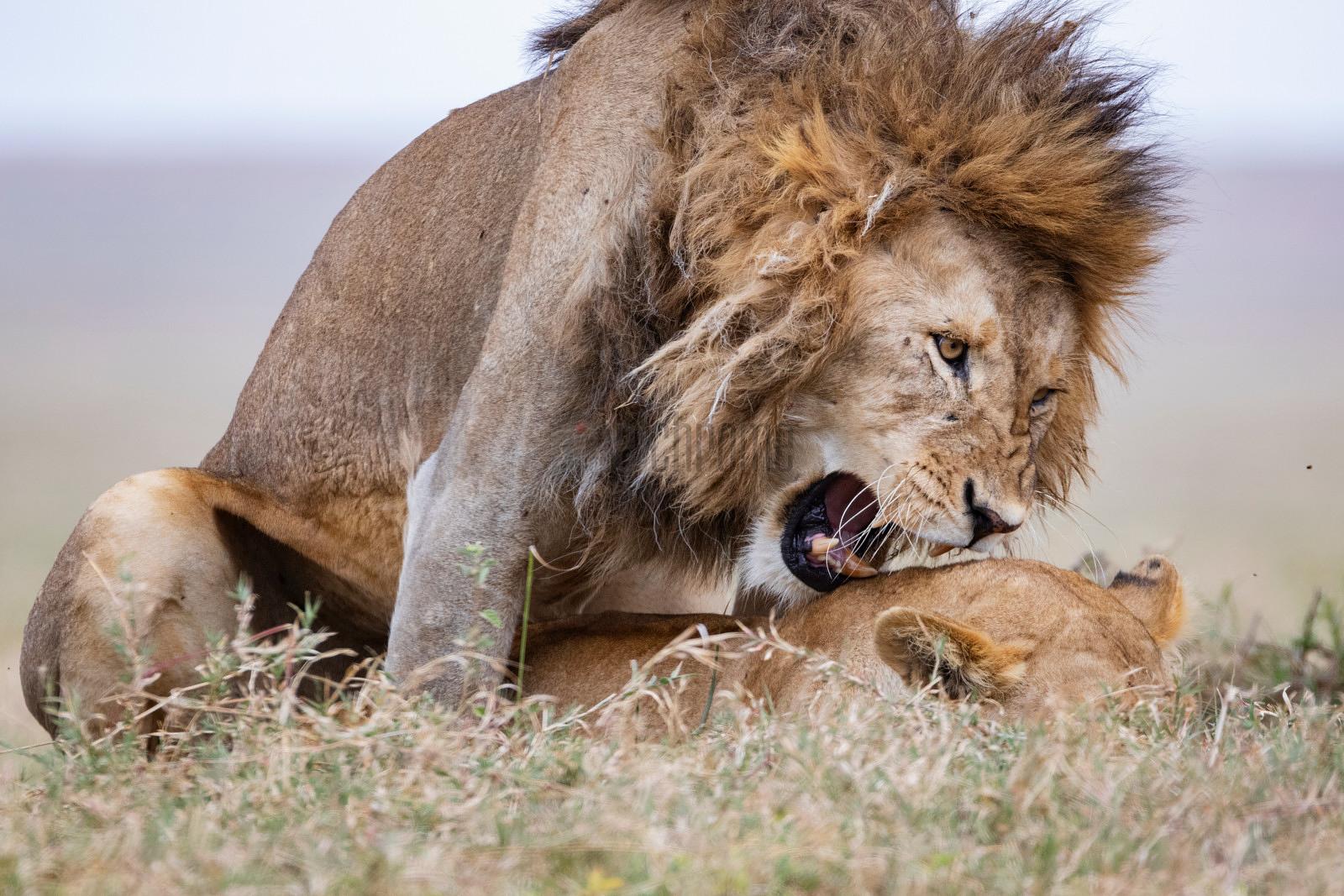 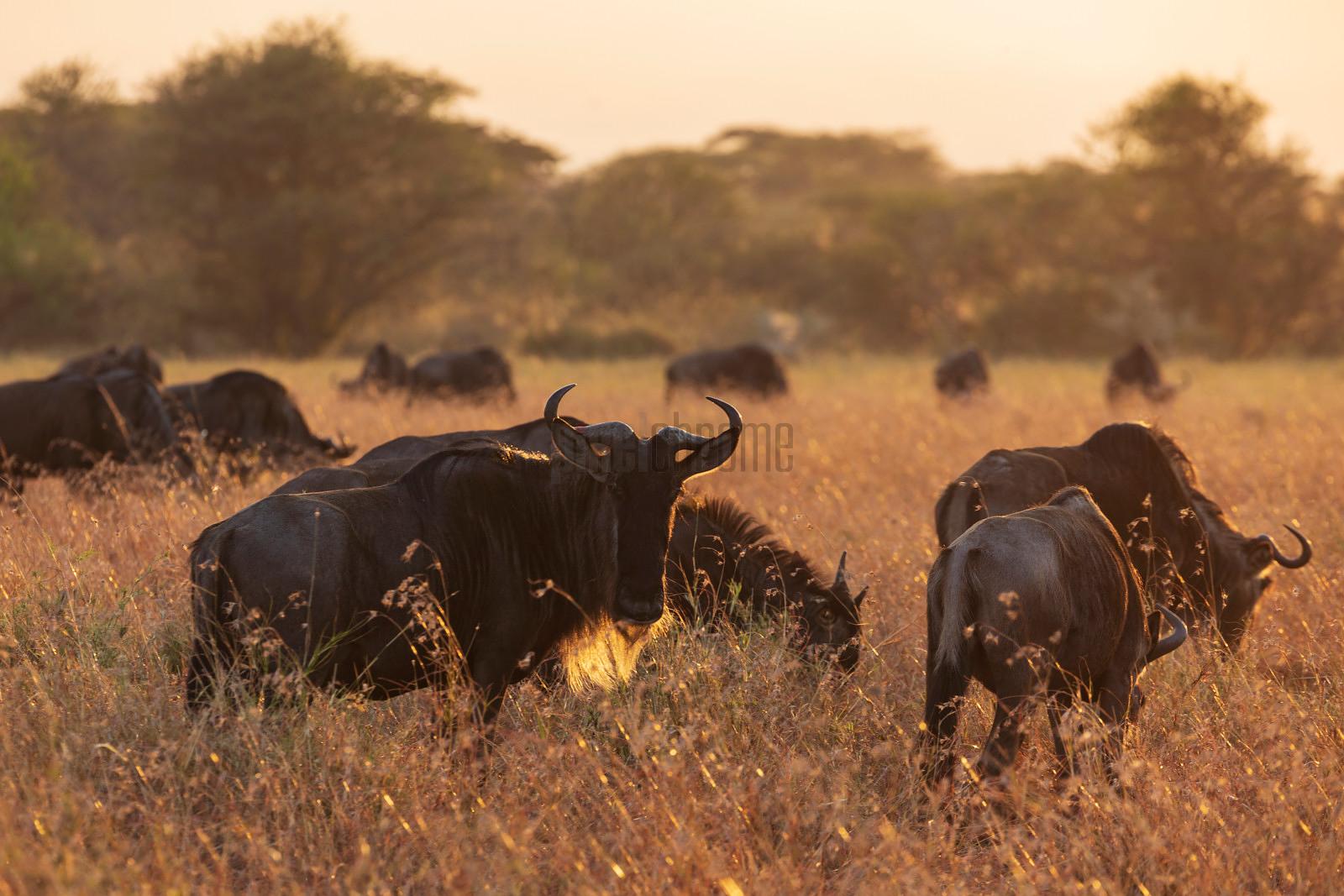 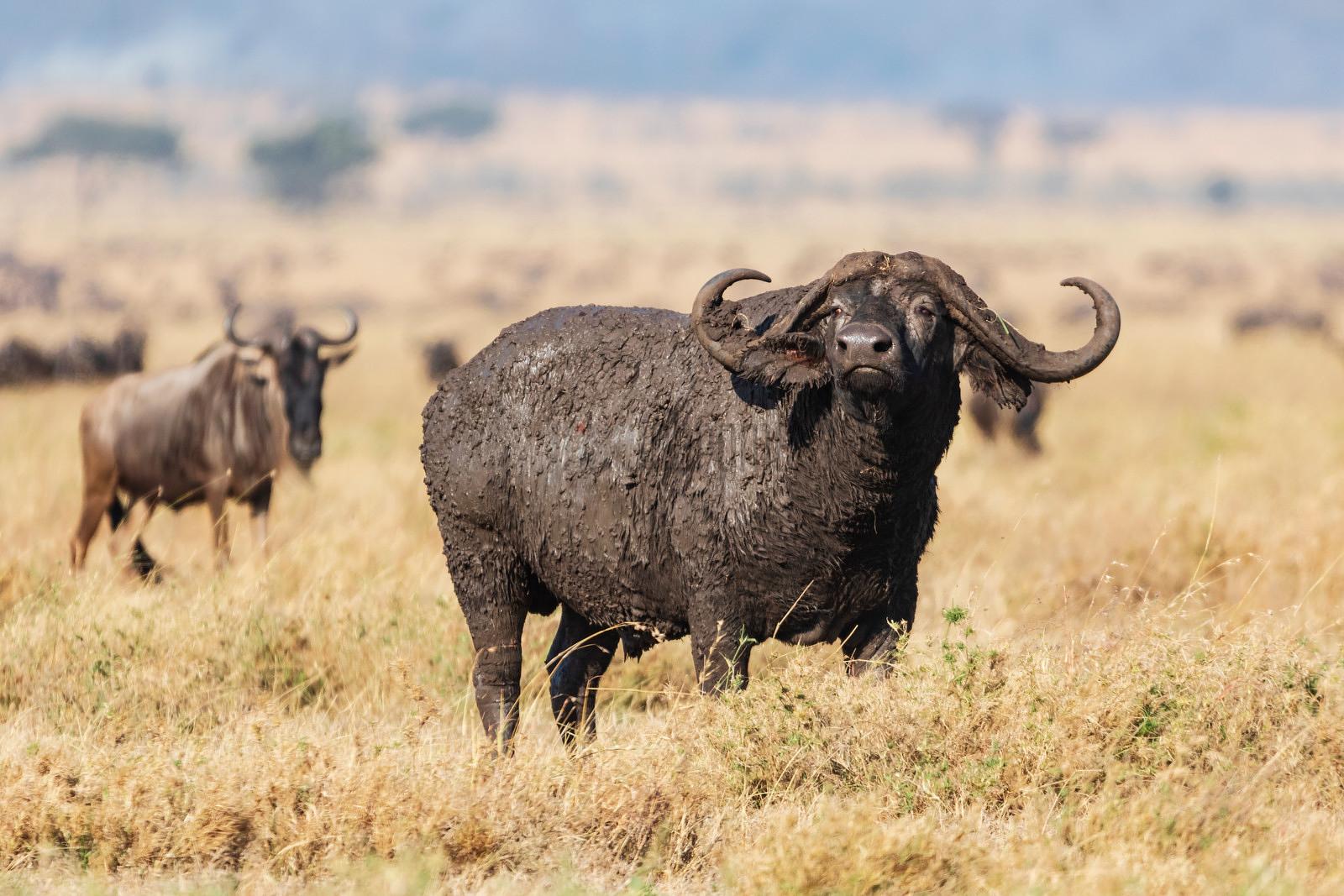 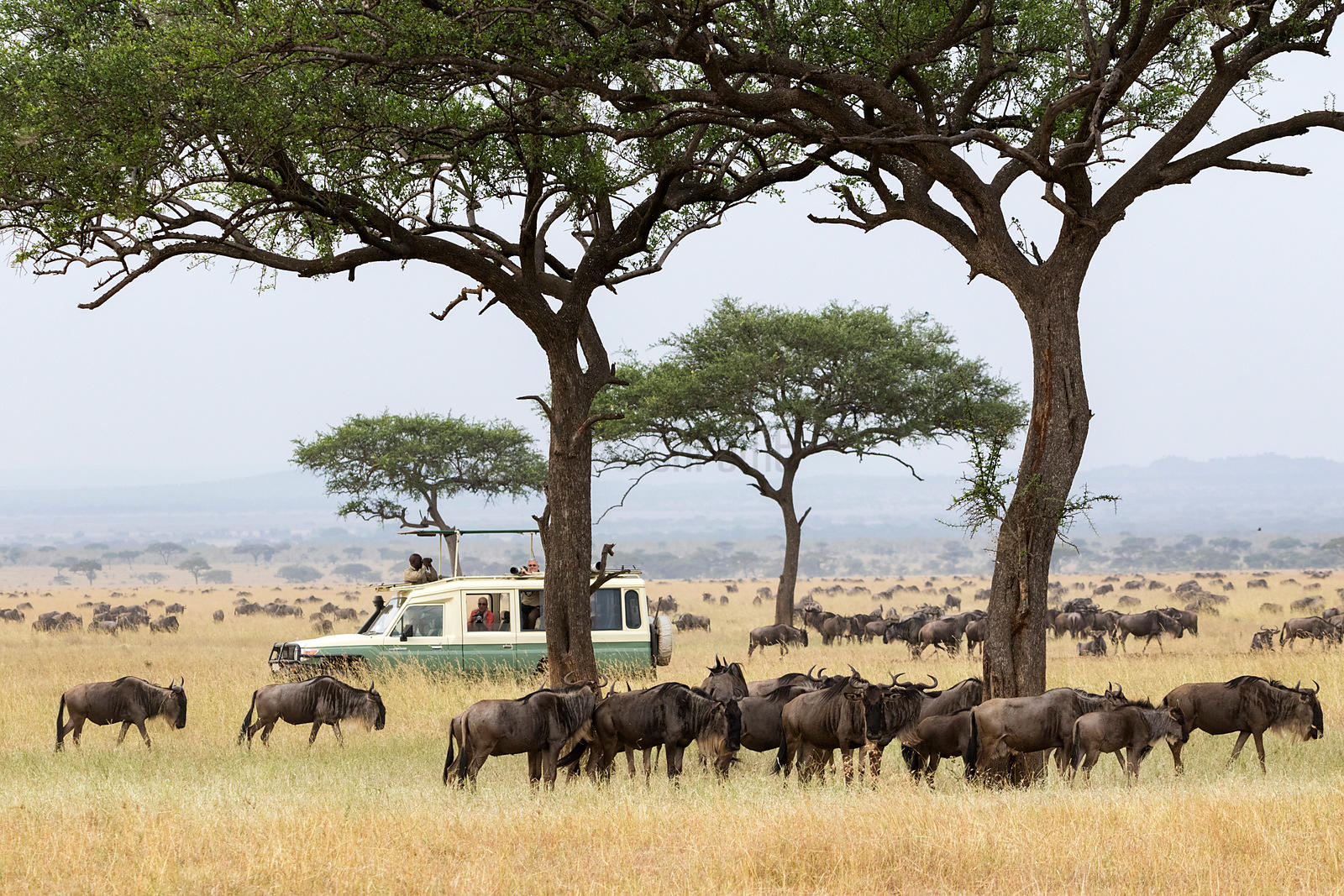 Ndutu
Nomad's Ndutu Seasonal Camp moves into the Ndutu woodland on the Serengeti Southern Plains between December and March as the wildebeest herds arrive in preparation for giving birth. It's here that they find the phosphorous rich grasses that they thrive on. This is a time of plenty for the animals and action is never far away at this time of year as the wildebeest cows drop their young. The Ndutu Safari Camp is located in the mature acacia woodland of Ndutu so as to be in prime location for this epic event.

The luxury mobile safari camp caters for only 16 people at a time and moves seasonally around the Serengeti ecosystem shadowing the Serengeti wildebeest migration. The camp not only offers one of the best chances of finding the wildebeest migration away from the crowds, but is also superbly comfortable with first class food. It's also one of the best ways to access to some remote and little visited areas of the Serengeti ecosystem that are well out of reach of the permanent safari lodges. The small crew of 4 - 6 Tanzanians who run the operation are friendly and efficient and look after your every need down to the smallest detail. In cold months you'll even find a hot water bottle in your bed when you turn in.

While walking is a possibility in some parts of the Serengeti, the emphasis here is predominantly on game drives and witnessing the migration and resident game in the company of one of Nomad's outstanding guides. While Serengeti Safari camp is shared by a maximum of 16 guests at one time, each group, whether you're a couple or a larger group, have a private vehicle and guide throughout the safari. This means you have full flexibility in planning your safari activities with your guide to suit yourselves. Nomad supply lavish picnics to be taken on all-day game drives, so you can choose to stay out all day some times, and return to camp for a lazy lunch and siesta on others.​ 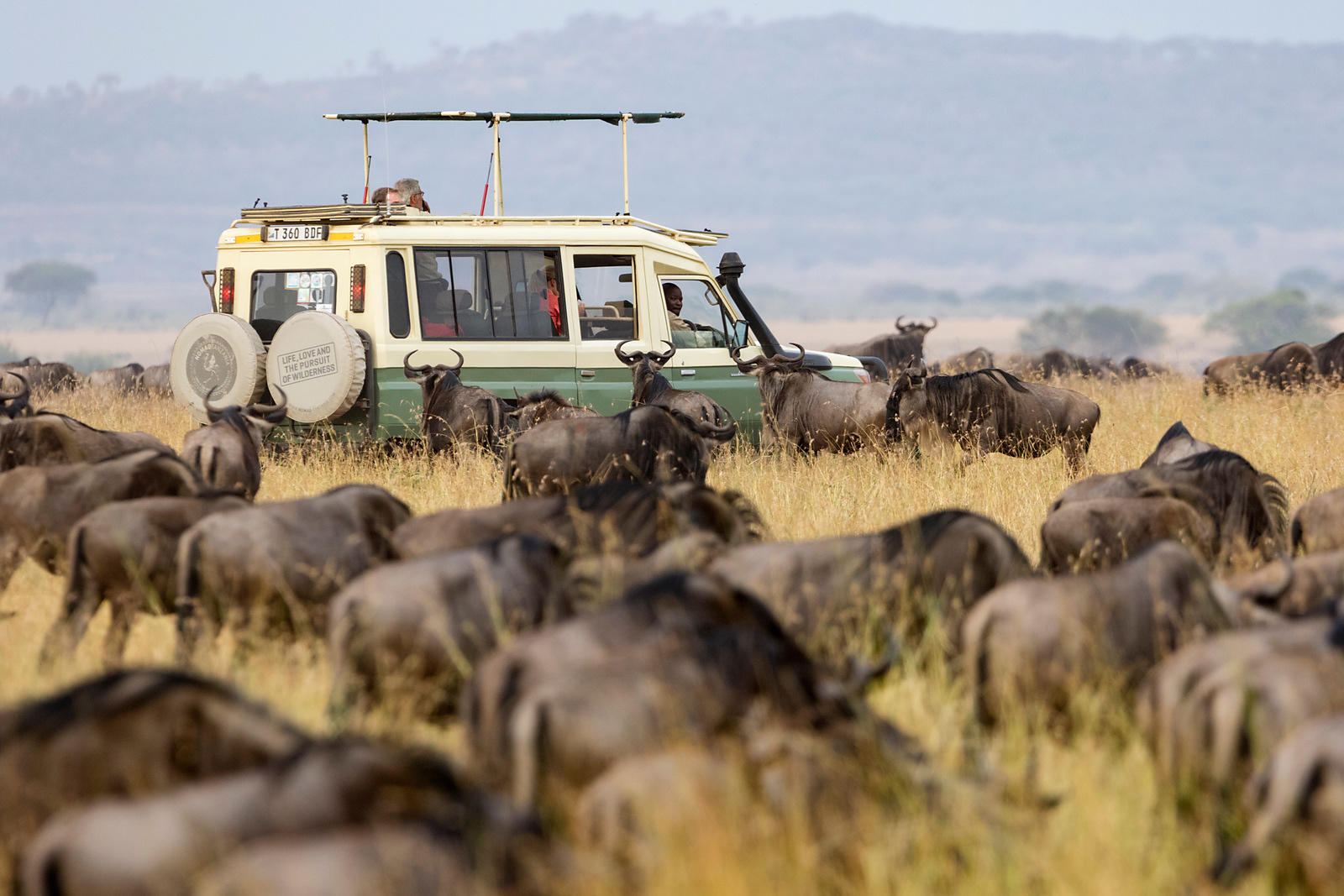 Day 1:Jan 17, 2023 – Arrive Arusha
Upon arrival at Kilimanjaro International Airport (JRO) in Arusha and after clearing immigration, you will be met by a Piper & Heath representative for your private road transfer to Rivertrees Country Inn.

O/N Rivertrees Country Inn
Rivertrees lies nestled in the foothills of Mount Meru, in view of Mount Kilimanjaro. This peaceful country estate combines old-world ambience, African country elegance, excellent farm cuisine, personal service, and genuine warmth from your hosts. The inn offers tranquility enhanced with contemporary conveniences, ideal for rejuvenation following stressful overseas travel or deep relaxation after a long safari or strenuous climb up Mount Kilimanjaro or Mount Meru. There are eighteen individually styled garden rooms, two hidden cottages, and the River House—a secluded thatched cottage on the Usa River. Fresh country meals are served in the restaurant, the gardens, the pub, near the river, and in the beautifully restored farmhouse with its warm ochre colors and cherished family antiques.

Day 2 - 13: Jan 18-29, 2023 – Arusha/Ndutu
This morning you will have a private road transfer to Arusha Airport (ARK) for your light aircraft flight* to Serengeti Safari Camp in the southern Serengeti’s Ndutu region.
* Luggage is limited to 15kg per person in soft-sided bags.
* Flight is currently scheduled to depart Arusha at 11:00am and arrive at Ndutu at 11:45am. There may be stops en-route.

For the next 12 days we will explore this region of the southern Serengeti. We will be in private vehicles so we will be able to go wherever and whenever we please. We also will have permits to enter the Serengeti National Park for 3 days.

The Serengeti
Stretching from northern Tanzania to southwestern Kenya are the plains of the legendary Serengeti. In the native Maasai language, Serengeti aptly means “Endless Plains.” Unlike other parts of the Africa, the Serengeti managed to avoid European colonization due to the fierce tribes of Maasai that roamed these lands since ancient times. While they were known as fierce warriors, the Maasai actually had an aversion to eating wild game and subsisted almost exclusively on their domesticated cattle. But the rinderpest epidemic and droughts of the late nineteenth century devastated the populations of both the Maasai and the indigenous wildlife. By the mid-twentieth century, drought and fires (both natural and human-caused) reduced forestation across the plains and further encouraged the growth of grasses. But as the populations of the plains game rebounded in the after 1970, native Acacia trees have begun to recapture some territory. As host to the largest mammal migration in the world, the Serengeti’s diverse ecosystems are today home to more than just great herds of blue wildebeest. Innumerable gazelle, zebra, and buffalo also graze the grasslands along with notable numbers of elephant and giraffe. Not far behind the migrating herds are the Serengeti’s predators, most notably lion but also including leopard, cheetah, jackal, hyena, aardwolf, and serval cat.

O/N Serengeti Safari Camp
Serengeti Safari Camp was the first of its kind. It was designed with a purpose in mind; to be in the best possible location to view the wildebeest migration as it covers hundreds of miles of the Serengeti National Park each year. So it should come as no surprise that it really has not changed much since its early pioneering days. Each year, the camp casts off from Lamai Serengeti and begins its own odyssey. Covering hundreds of miles and moving every couple of months along a route that the herds have traveled for hundreds of years, Serengeti Safari Camp is where you come for your migration fix. The camp has just six large walk- in meru tents, with a dressing area and then an en-suite bathroom at the rear. New eco-flush toilets and safari-style bucket showers are part of every tent, as well as jugs of hot and cold water delivered as and when you would like them. The main dining tent sits in the middle of the line of tents, with the fireplace right in front and a separate library/bar tent nearby.

Day 14: 30 Mar, 2023 – Transfer to Arusha for flights home
This morning you will transfer to the airstrip for your light aircraft flight* back to Arusha (ARK). You will have a private road transfer back to Kilimanjaro International Airport (JRO) where you will connect to your departing commercial flights.

* Luggage is limited to 15kg per person in soft-sided bags.
* Flight is currently scheduled to depart Ndutu at 10:55am and arrive at Kilimanjaro at 12:30pm. There may be stops en route. 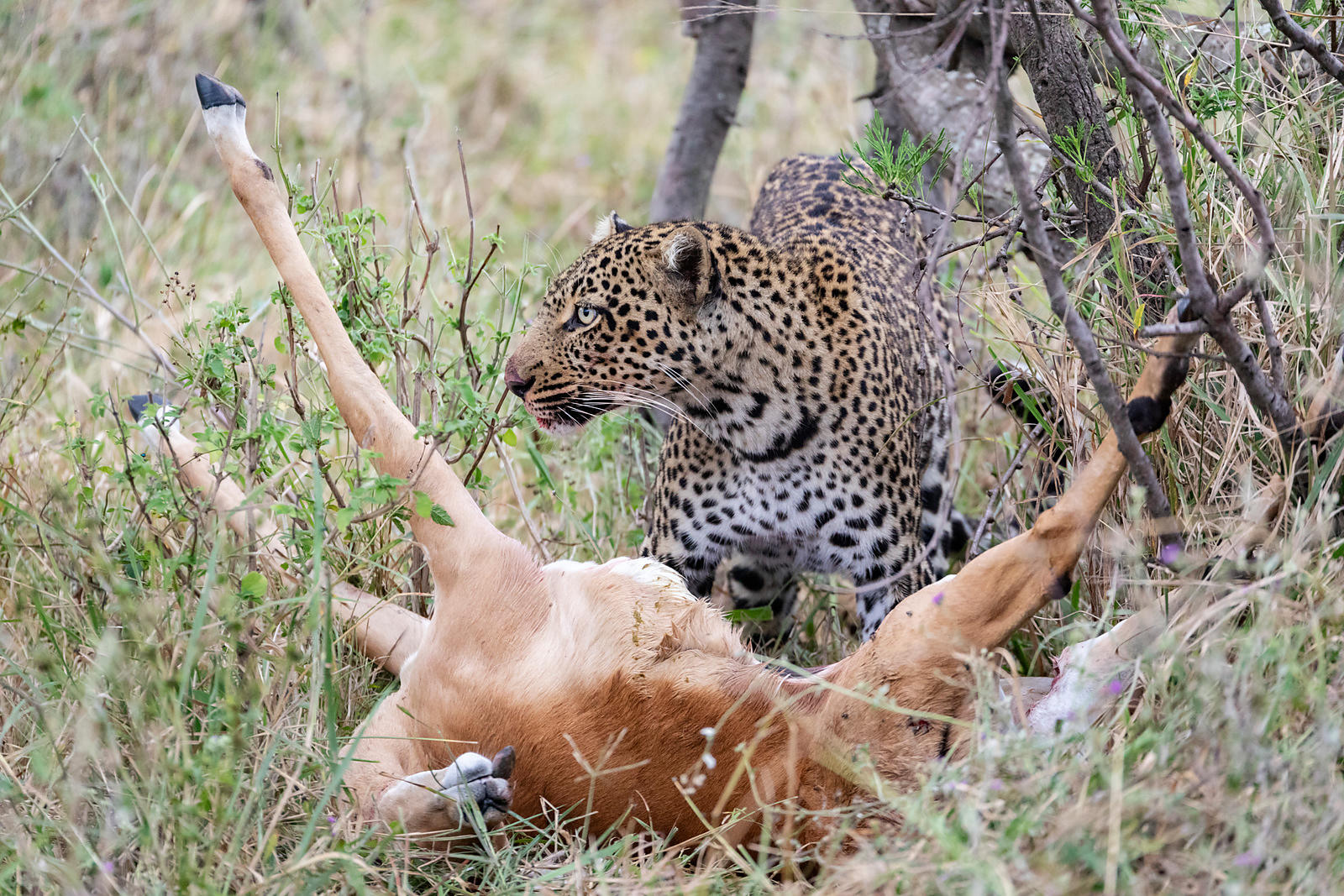 Arrival & Meeting Place
Upon arrival at Kilimanjaro International Airport (JRO) in Arusha and after clearing immigration,
you will be met by a Piper & Heath representative for your private road transfer to Rivertrees
Country Inn.
Departure
This morning you will transfer to the airstrip for your light aircraft flight back to Kilimanjaro
International Airport (JRO) in Arusha where you will connect to your departing commercial flight.
​
* Luggage is normally limited to 15kg per person in soft-sided bags, but an extra seat has been
included on this flight in order to allow for luggage capacity of around 23kg per person.
* This flight is currently scheduled to depart Ndutu at 10:55am and arrive Kilimanjaro at 1:00pm.
There may be stops en route.
Visa
The Tanzania Online Visa was implemented in November 2018 to simplify the process of applying, and obtaining a Tanzania Tourist Visa, also known as Ordinary Visa.
The online Tanzania Visa is a single-entry visa, valid for 90 days, that allows eligible citizens to enter and travel around Tanzania and the Zanzibar Archipelago, for tourism and leisure purposes, or to visit friends and relatives.
Citizens of the United States of America can travel to Tanzania and Zanzibar with a multiple-entry visa, valid for 12 months, which allows stays up to 90 days.
To apply for a Tanzania Visa, applicants need a passport valid for at least six (6) months from the date of arrival to Tanzania or Zanzibar.

The best times to visit Serengeti National Park are from January to February or from June through September. January is fairly warm in Tanzania, with the temperatures ranging between 26-30ºC. The sun is up early in the morning for about 10 hours on an average. The weather is slightly humid if it rains, which is rare during January.

Tanzania is an East African country and Swahili is the nation's official language. English is widely spoken, and other languages spoken in the country are the native tongues of various ethnic groups. The ethnic languages are mainly of Bantu and Nilotic origin. These languages have various levels of growth, and 58 of 126 are considered to be in vigorous use, 18 are developing, some are dying, and three languages have become extinct. Most of Tanzania's population is fluent in their mother tongue and one other language, mainly Kiswahili. The general population has considerable knowledge of English, but their fluency in Swahili is more noticeable.