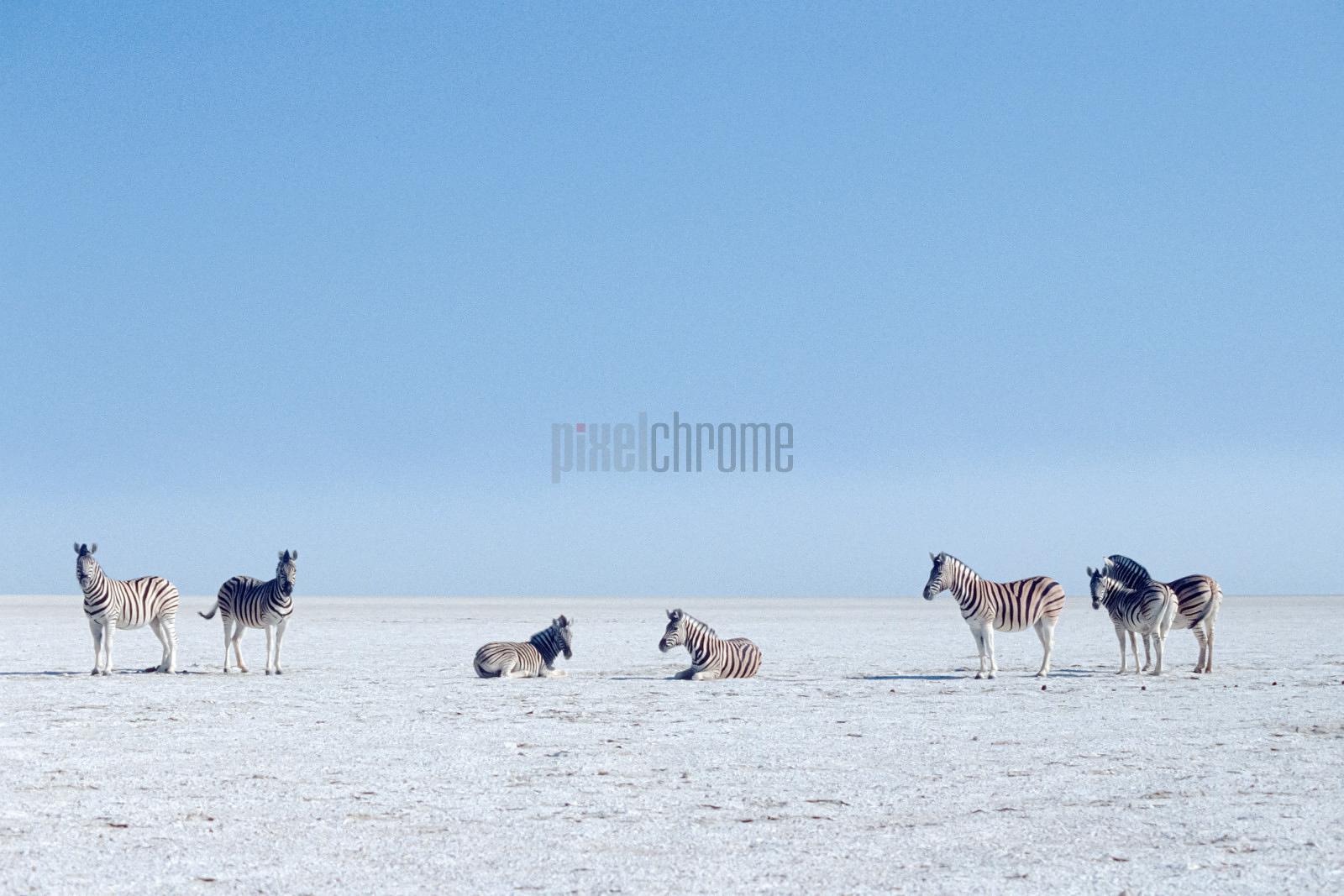 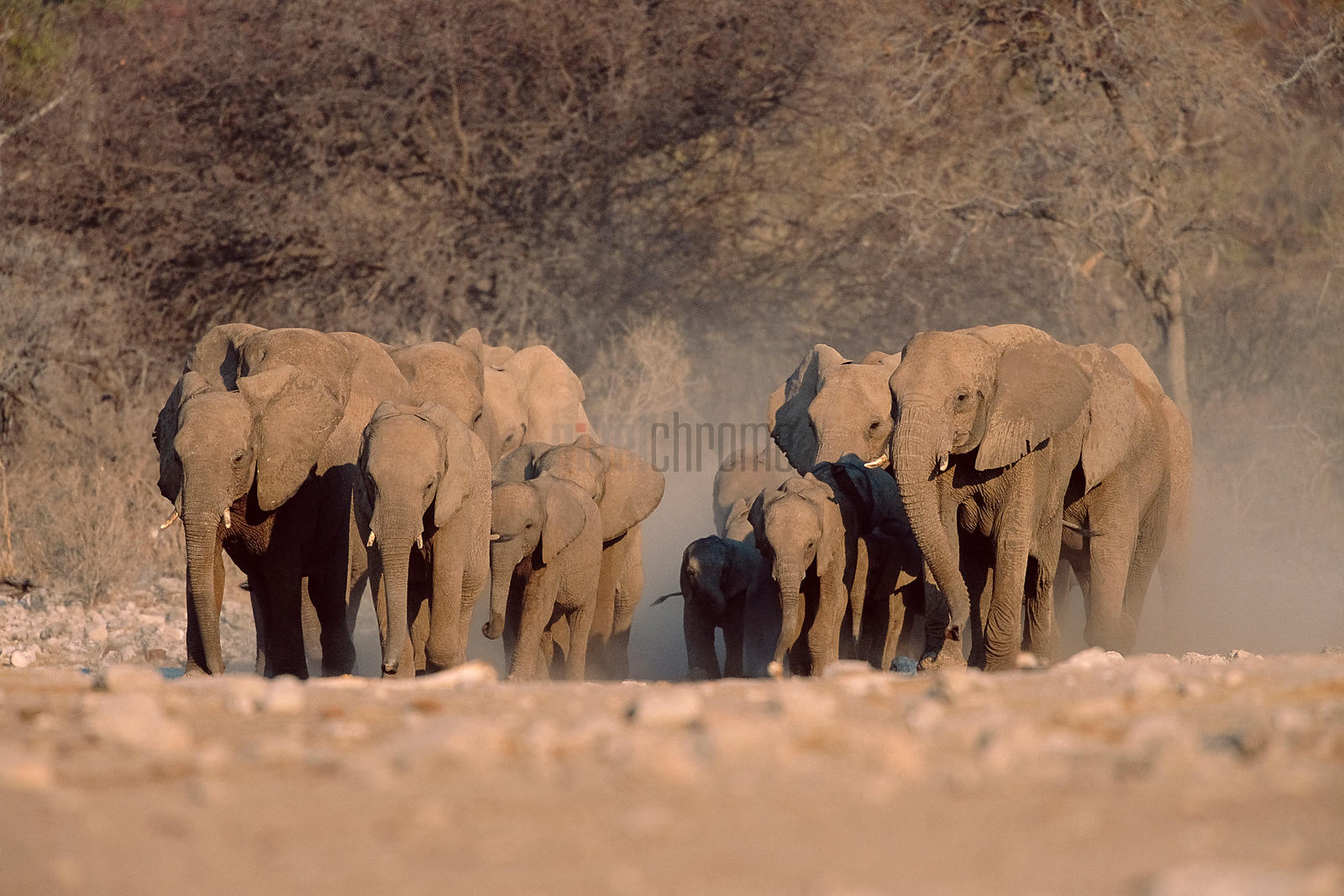 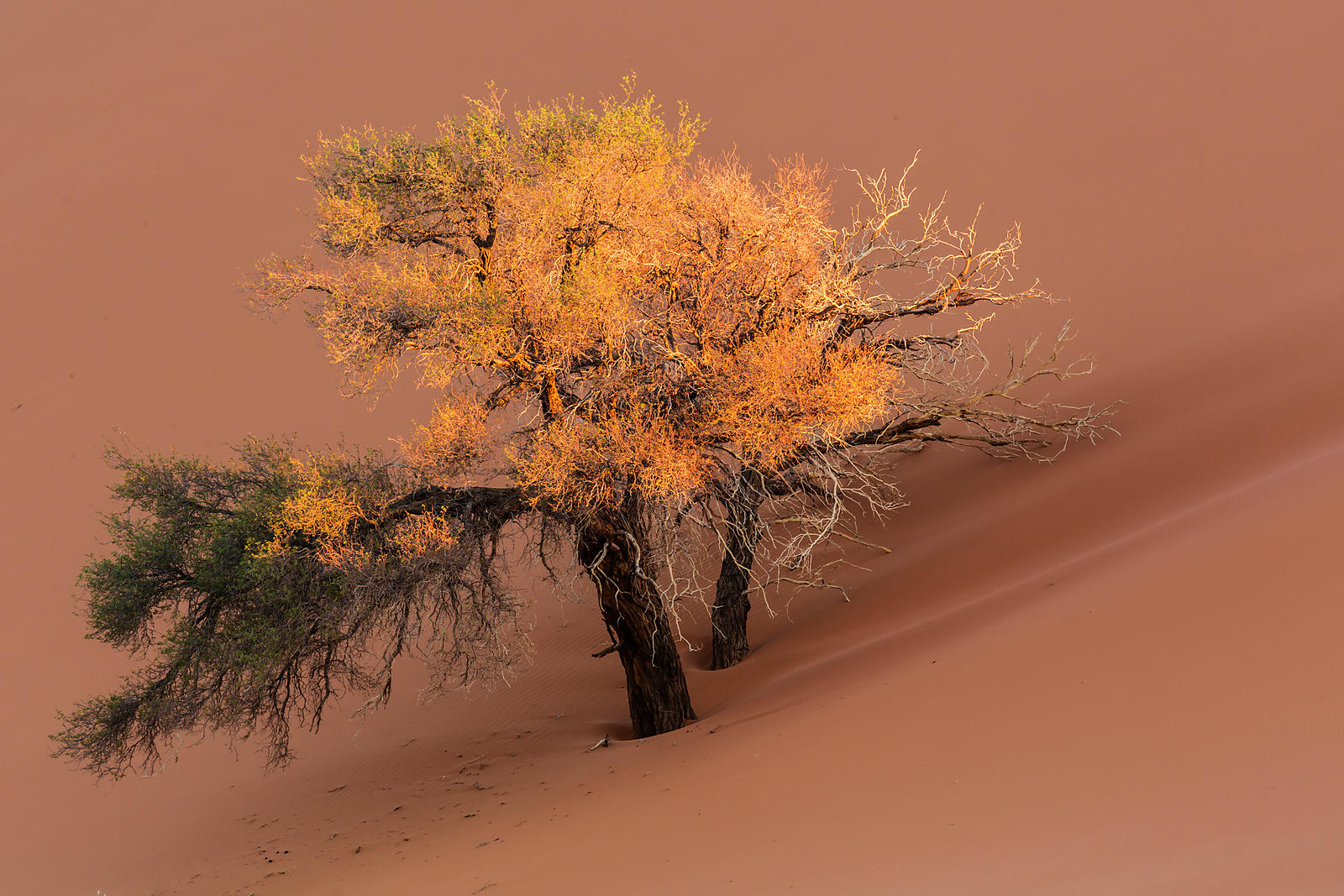 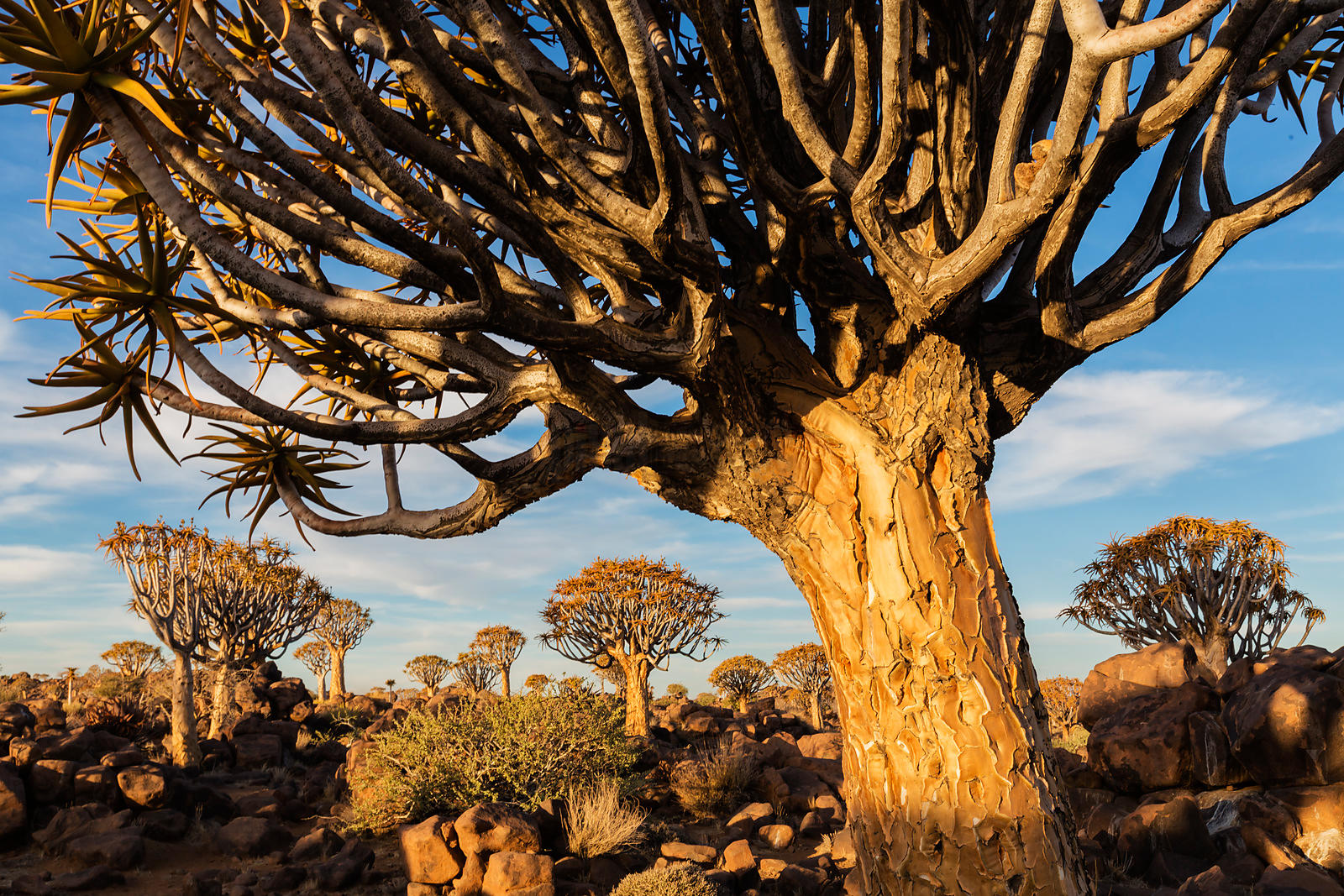 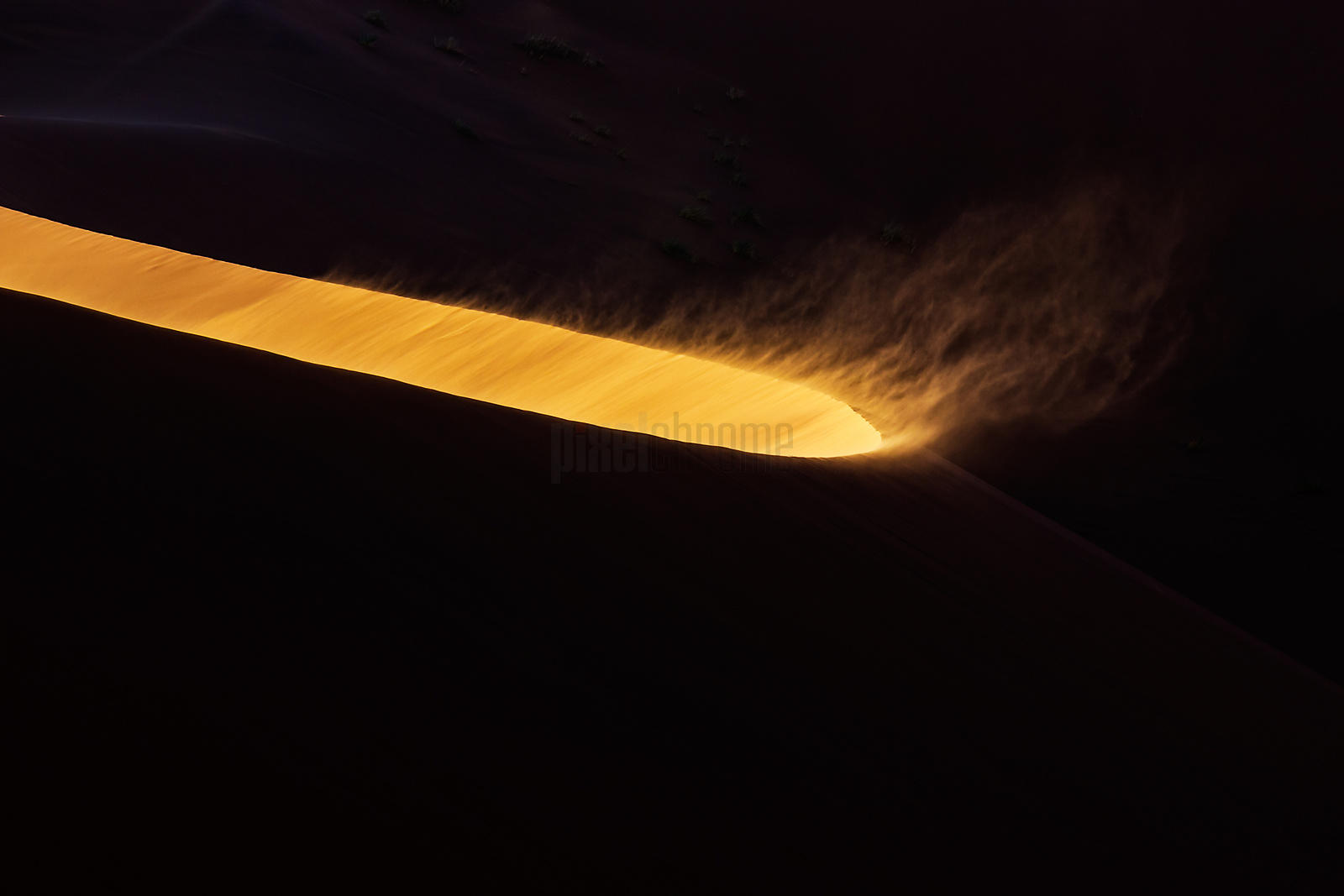 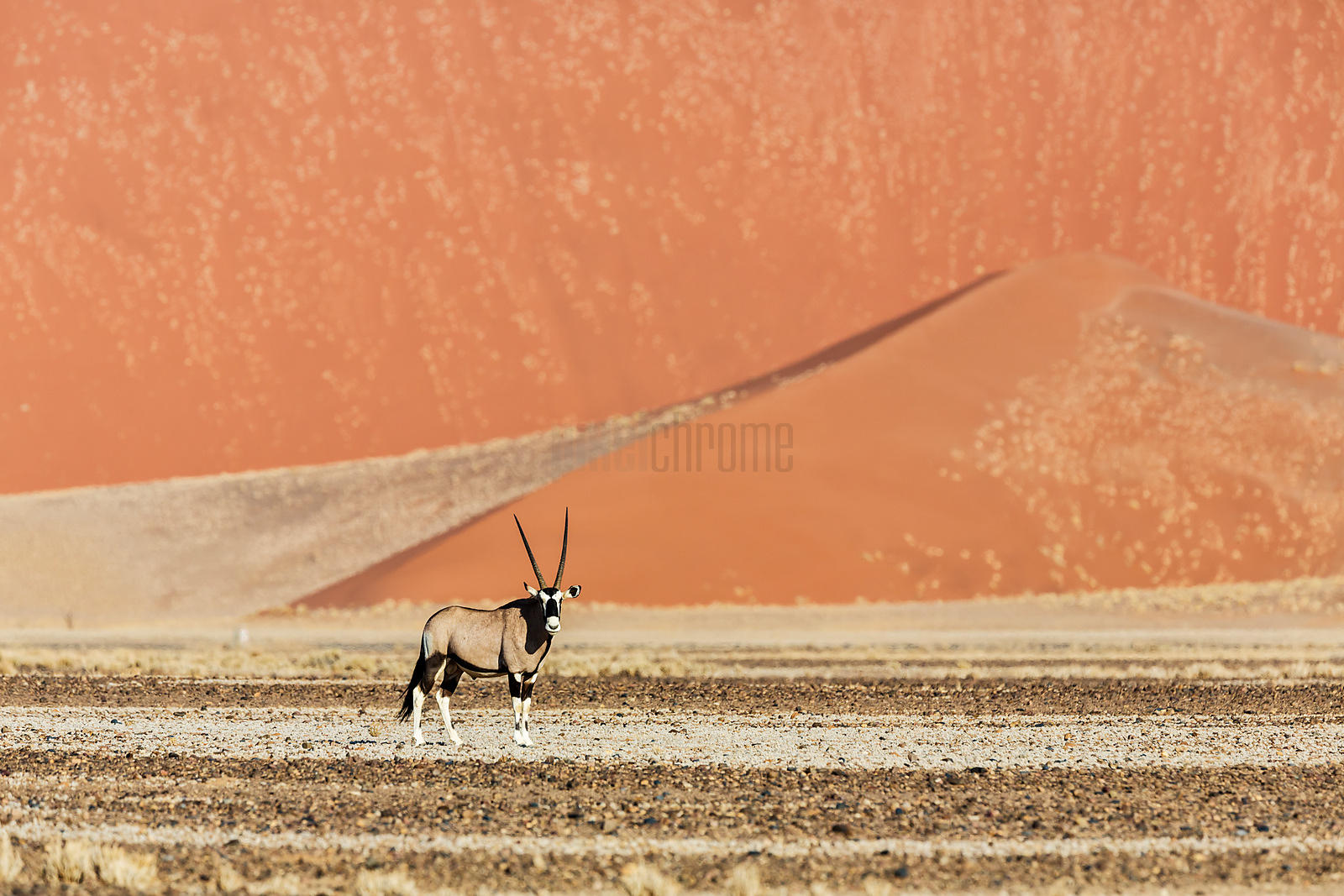 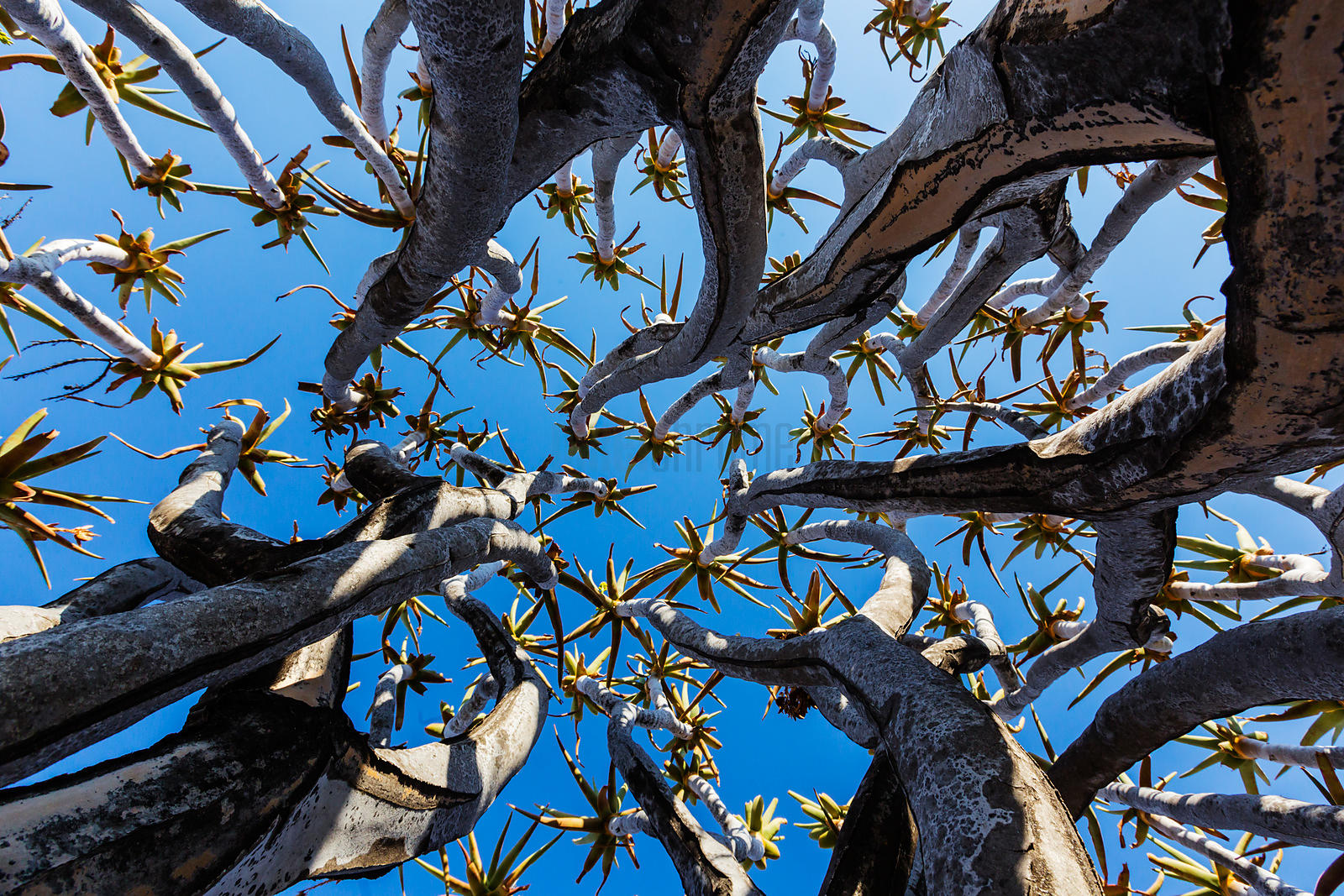 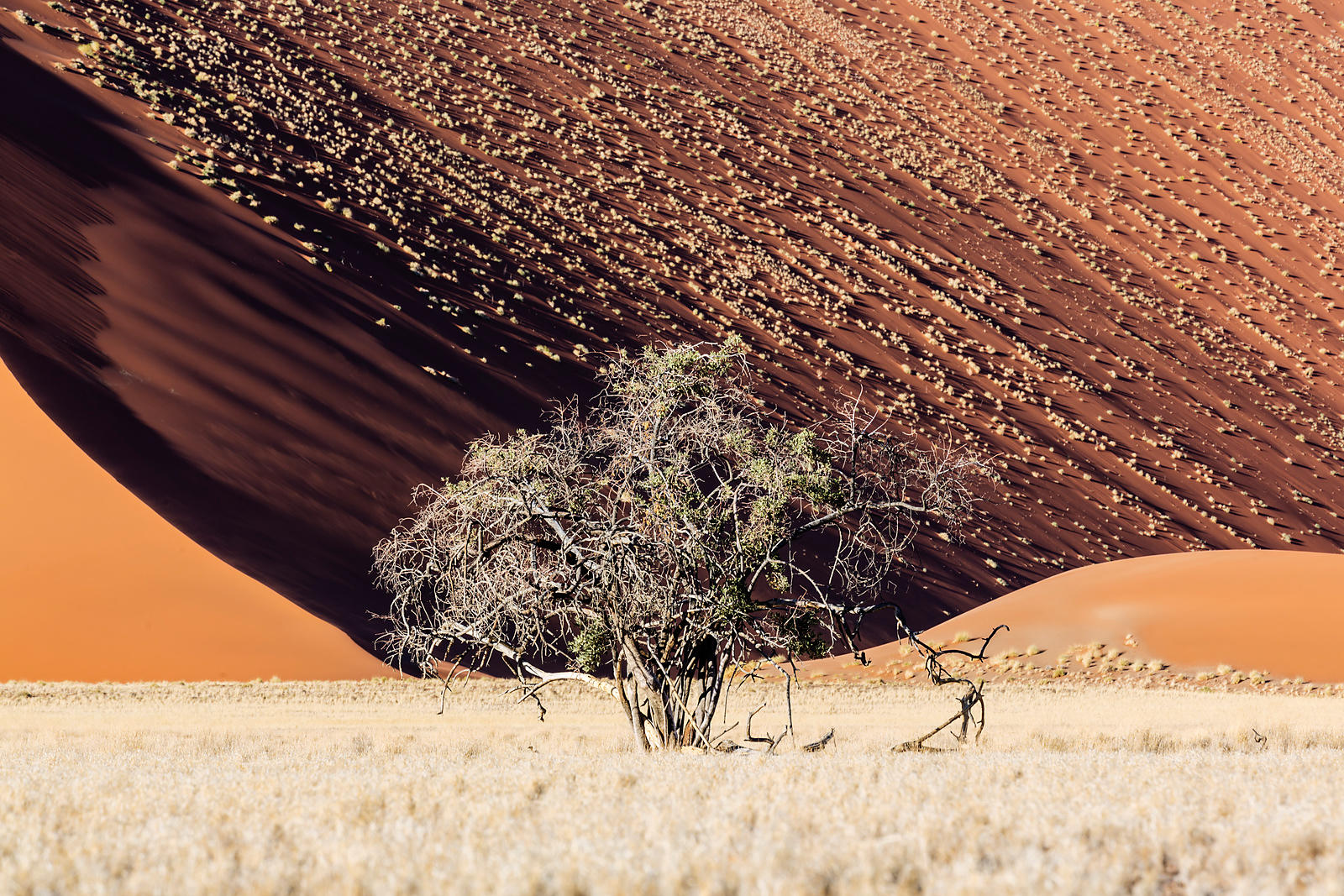 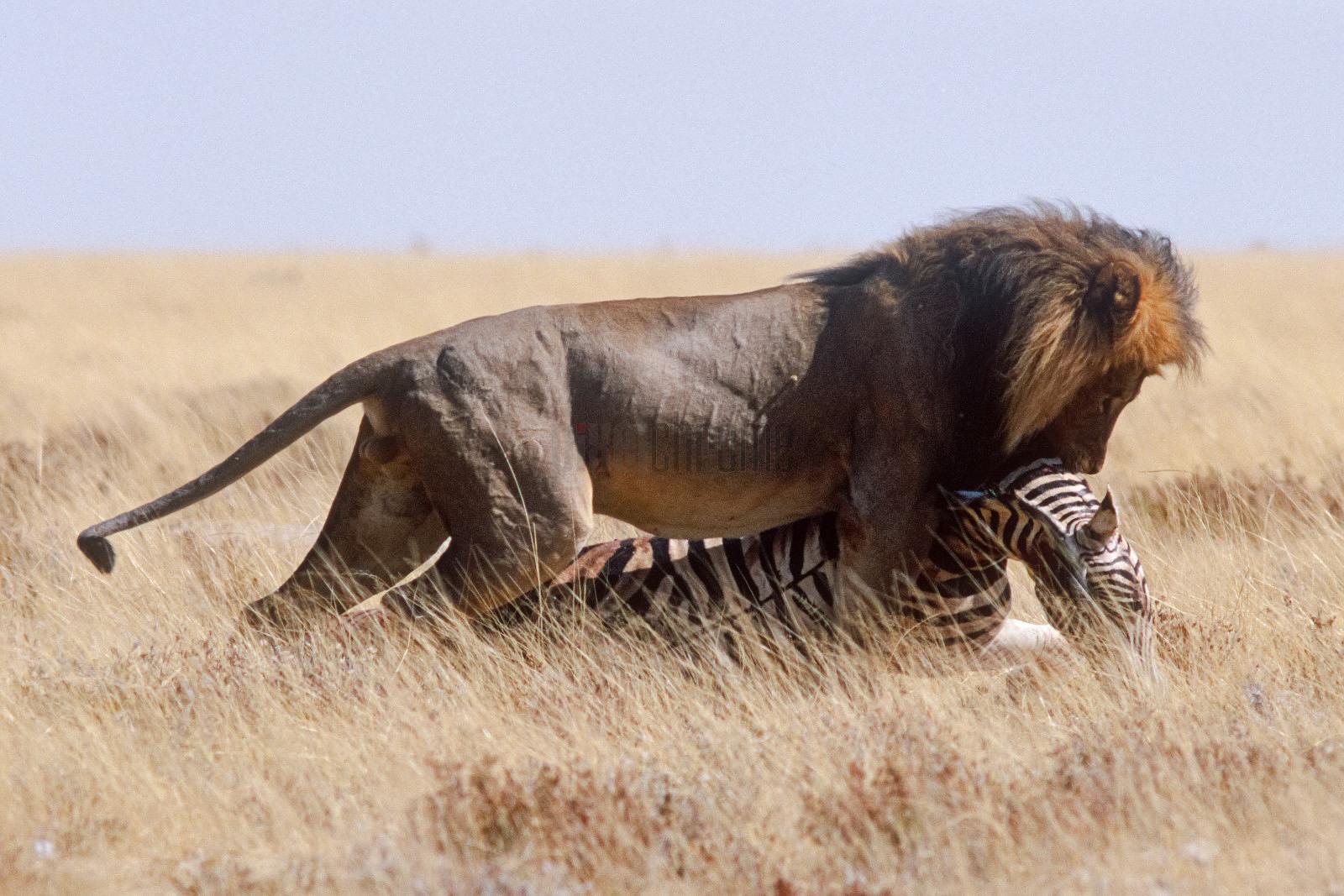 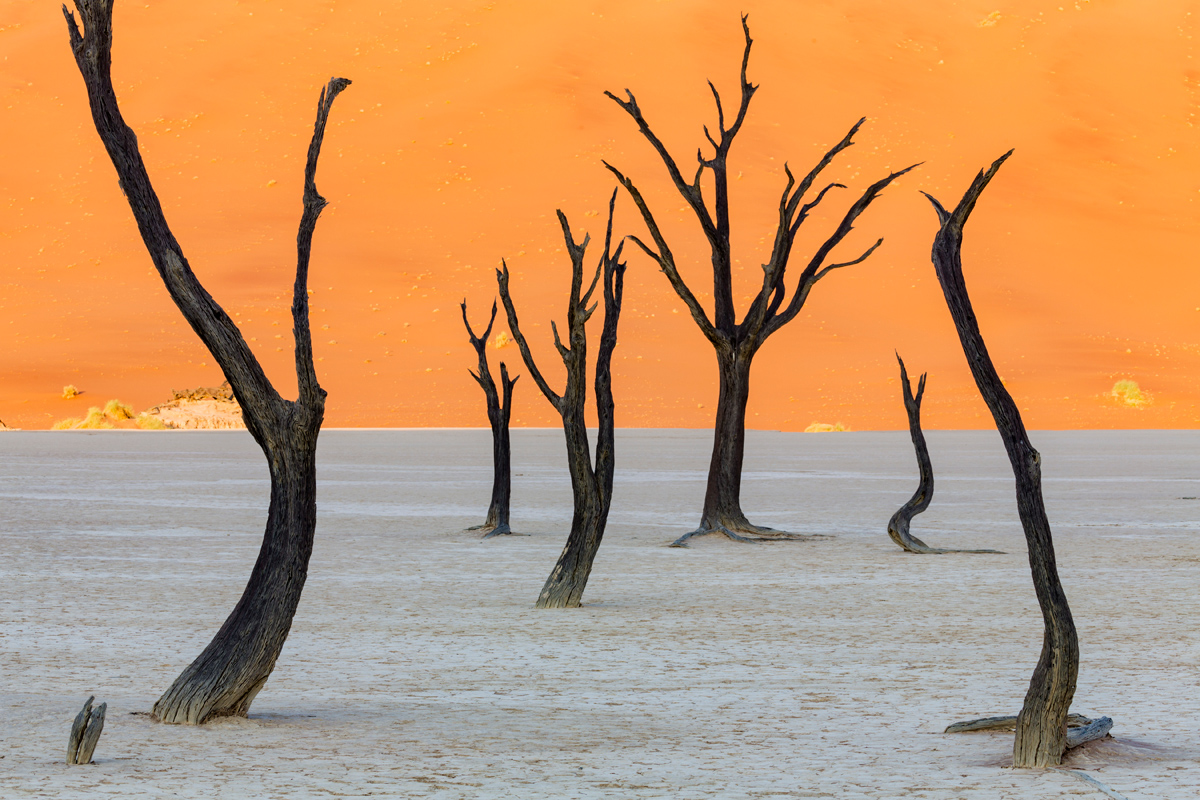 This is a very different trip from what ANYONE is currently offering. We will enjoy six days of landscape photography in two very desirable locations, followed by eleven days of wildlife photography in one of my favorite places in the world, Etosha National Park—almost like having two trips in one—and with travel times in between destinations, the total, FULLY INCLUSIVE tour, will last 19 days.

We will be in the desert during the stage of the new moon so will have very dark skies for you to enjoy night time photography, both at the Quiver Tree Forest and at the dunes of Sossusvlei.

What is a Slow Safari?
Gone is the hectic wildlife photography safari where you are constantly moving from camp to camp every 2-3 days. Gone is the constant repacking, driving, flying to get to the next destination, only to have to move again to make way for the next group of travellers.

Our "Slow Safaris", to hand-picked destinations in Africa, will allow you to stay in one camp for anywhere up to 10 nights (or more), allowing you to immerse yourself in one place — to get to know the movement of the animals and the rhythm of the bush — to have the luxury of, let's say, being able to follow the progress of a young lion cub as it gets to know ITS environment.

The "Slow Safari" is comfortable — you will have your own space where you can unpack and spread out. You can afford to take the day off…if you want to. Our vehicles are spacious with plenty of room for cameras. The use of time is ours to plan the way WE want it.

History of Namibia
The history of this land can be found carved into rock paintings found to the south and in Twyfelfontein, some dating back to 26,000 B.C. A long lineage of various groups including San Bushmen, Bantu herdsmen and finally the Himba, Herero and Nama tribes among others have been making this rugged land home for thousands of years.

But, as Namibia has one of the world's most barren and inhospitable coastlines, it wasnt until the middle of the nineteenth century that explorers, ivory hunters, prospectors and missionaries began to journey into its interior. Beyond these visitors, Namibia was largely spared the attentions of European powers until the end of the 19th century when it was colonized by Germany.

The colonization period was marred by many conflicts and rebellions by the pre-colonial Namibia population until WWI when it abruptly ended upon Germany's surrender to the South African expeditionary army. In effect, this transition only traded one colonial experience for another.

In 1966 the South West Africa People's Organisation (SWAPO) launched the war for liberation for the area soon-named Namibia. The struggle for independence intensified and continued until South Africa agreed in 1988 to end its Apartheid administration. After democratic elections were held in 1989, Namibia became an independent state on March 21, 1990.

To date, Namibia boasts a proud record of uninterrupted peace and stability for all to enjoy.

Conservation
Conservation is a cornerstone of the Namibian experience. Namibia was the first African country to incorporate protection of the environment into its constitution, and the government has reinforced this by giving its communities the opportunity and rights to manage their wildlife through communal conservancies.

Today, over 43% of Namibia's surface area is under conservation management. This includes national parks and reserves, communal and commercial conservancies, community forests, and private nature reserves.

After Independence in 1990, visionary conservationists in the field and the Ministry of Environment and Tourism enacted policy changes that allowed rural communities to benefit from wildlife by forming conservancies. In 1998, the first four conservancies were registered.

Today, more than 70 registered conservancies embrace one in four rural Namibians. A sense of ownership over wildlife and other resources is encouraging people to use their resources sustainably. Wildlife is now embraced as a complimentary land use method to agriculture and livestock herding.

People are living with wildlife, including predators and large mammals, and are managing their natural resources wisely. They are also reaping the benefits. In 2009, community-based natural resource management generated over N$ 42 million in income to rural Namibians. All the while, the program is facilitating a remarkable recovery of wildlife.

​Namibia now boasts the largest free-roaming population of black rhinos and cheetahs in the world and is the only country with an expanding population of free-roaming lions. Namibia's elephant population more than doubled between 1995 and 2008 from 7,500 to over 16,000 individuals. This remarkable turnaround has led some to call Namibia's conservation efforts the greatest African wildlife recovery story over told. 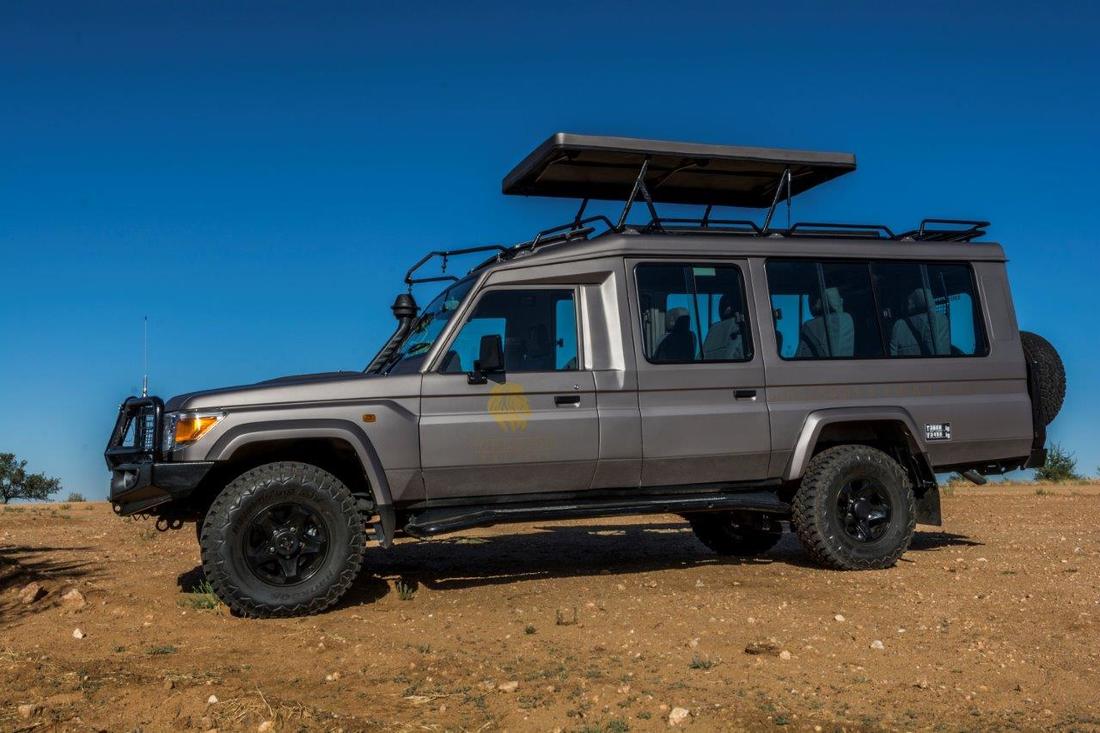 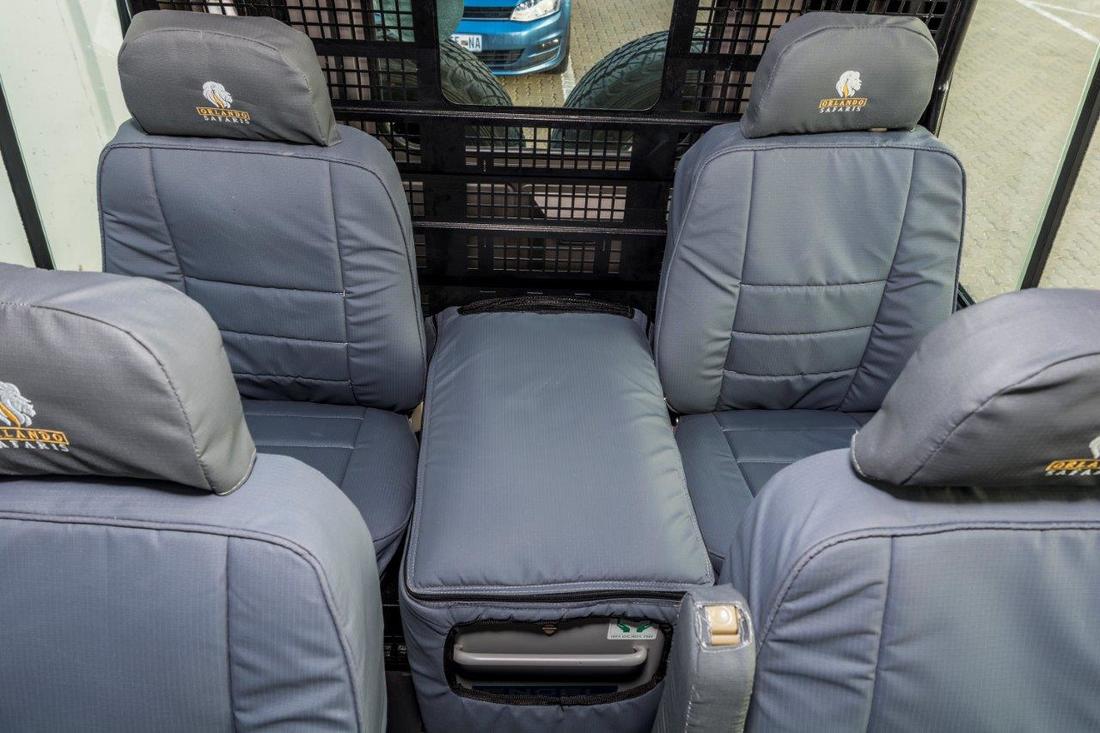 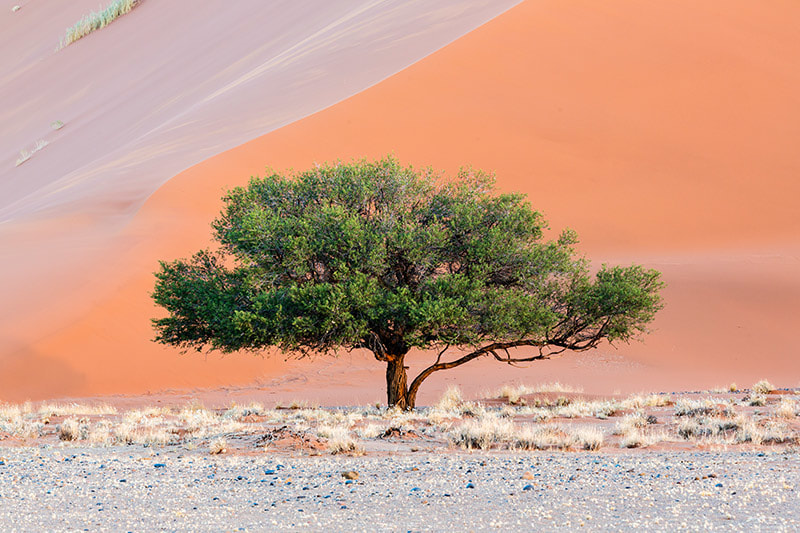 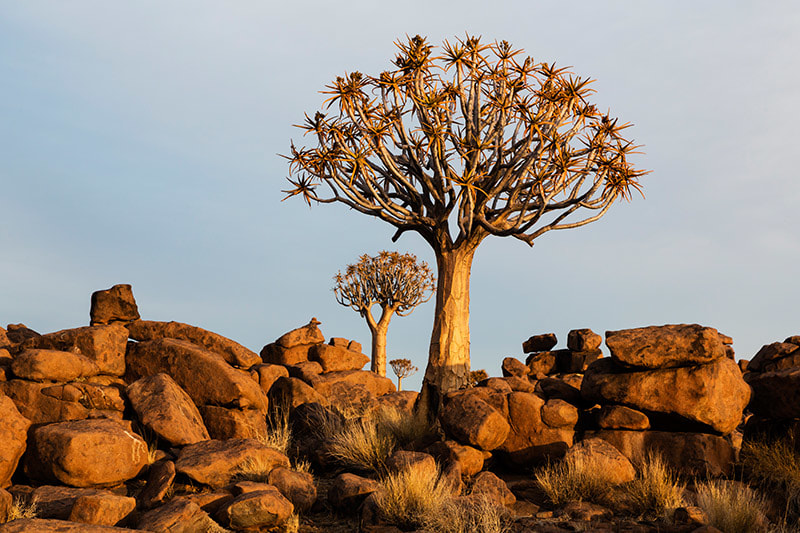 Quiver Trees at the Devil's Playground near Keetmanshoop

Namibia can be visited throughout the year. The climate is generally dry and pleasant. Namibia only receives a fraction of the rain experienced by countries further east. Between December and March, some days will be humid and rain may follow, often in localized, afternoon thunderstorms. Wildlife viewing in all parks, but especially in Etosha, is best in the dry season from June to October. In the Wet season, animals move away from the waterholes and scatter around the park.

English is the official language, but Namibia's relatively small population is extraordinarily diverse in language and culture. More than 11 languages are indigenous to Namibia but with its cosmopolitan society, languages from around the world are spoken in Namibia. People commonly speak two or three languages and more than 49% of the population speaks Oshiwambo. Due to the country's colonial history Afrikaans, the language of the previous South African occupiers is still widely spoken and functions as the lingua franca in Namibia. Namibia has two small groups of nomadic groups; the Khoisan speaking people, known as the Bushmen or San and the Ovahimba people, figuratively known as the red people.

The Namibian Dollar is the official currency and is fixed to and equals the South African Rand. Both these currencies can be used freely in Namibia, but the Namibian Dollar is not legal tender in South Africa. Traveler's checks and credit cards are also accepted throughout the country, though obviously not in every case. It's best to travel with multiple payment options just in case.

Currency Exchange: Foreign currency can be exchanged during normal banking hours at any of the commercial banks, or at bureau de change offices. Credit/Debit Card: American Express, MasterCard and Visa are accepted. Check with your credit or debit card company for details of merchant acceptability and other services, which may be available.

Currency Restrictions: The import and export of local currency is limited to NAD 50,000. The import of foreign currency by visitors is unlimited, provided it is declared upon arrival. Export of foreign currency is unlimited up to the amount imported and declared as long as the departure is within 12 months. No limits exist for travel between Botswana, Lesotho, Namibia, South Africa and Swaziland as these countries are members of the same common monetary area.

Location: Situated on the southwestern coast of Africa, Namibia borders Angola and Zambia in the north, South Africa in the south and Botswana in the east.

Literacy: The current literacy rate in Namibia is about 83%, one of the highest in Africa.

Religion: Freedom of religion was adopted through Namibia's Bill of Fundamental Rights. About 90% of the population is Christian.

Electricity: 220 volts AC, 50hz. Outlets are of the round three-pin type.