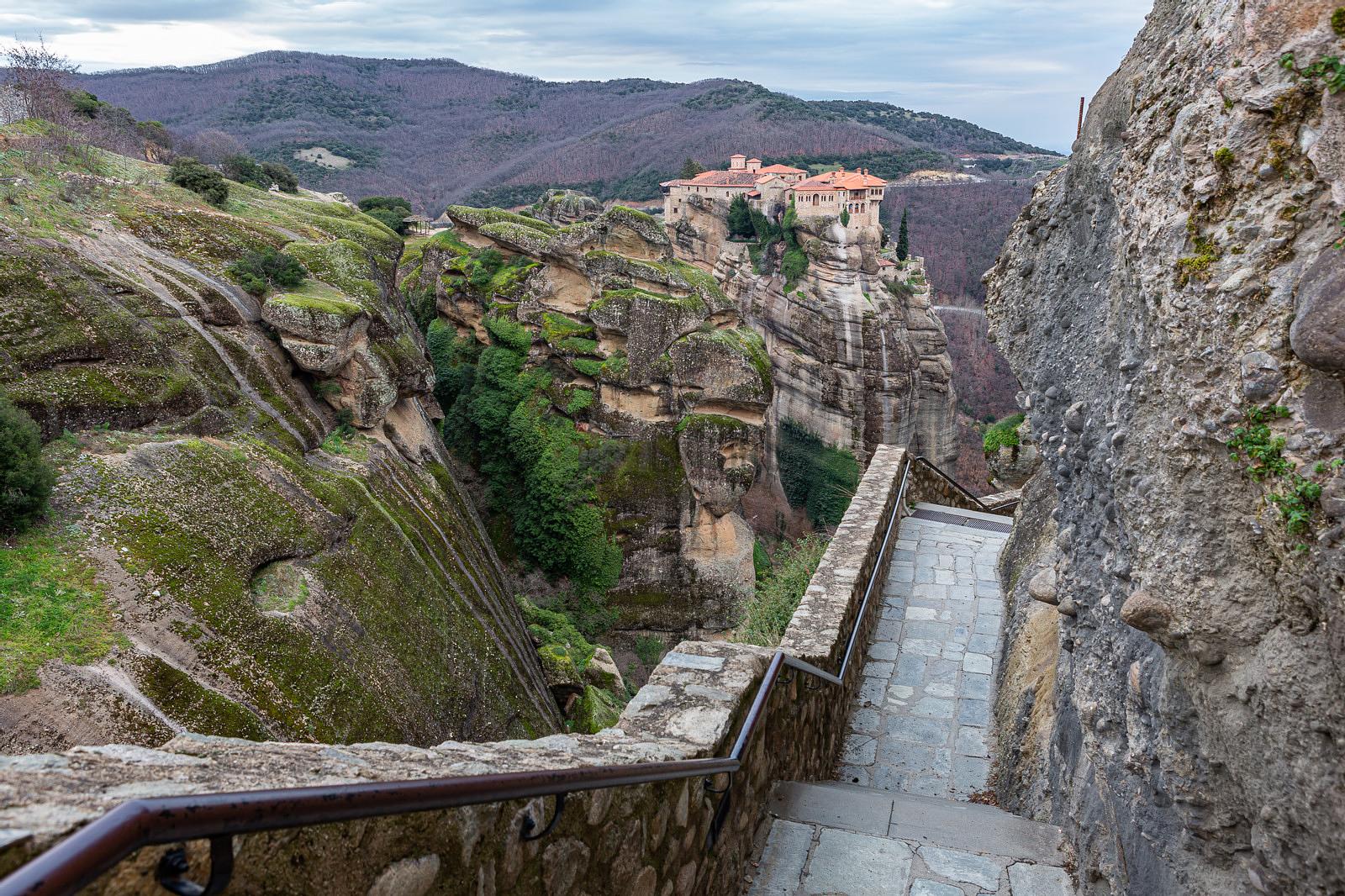 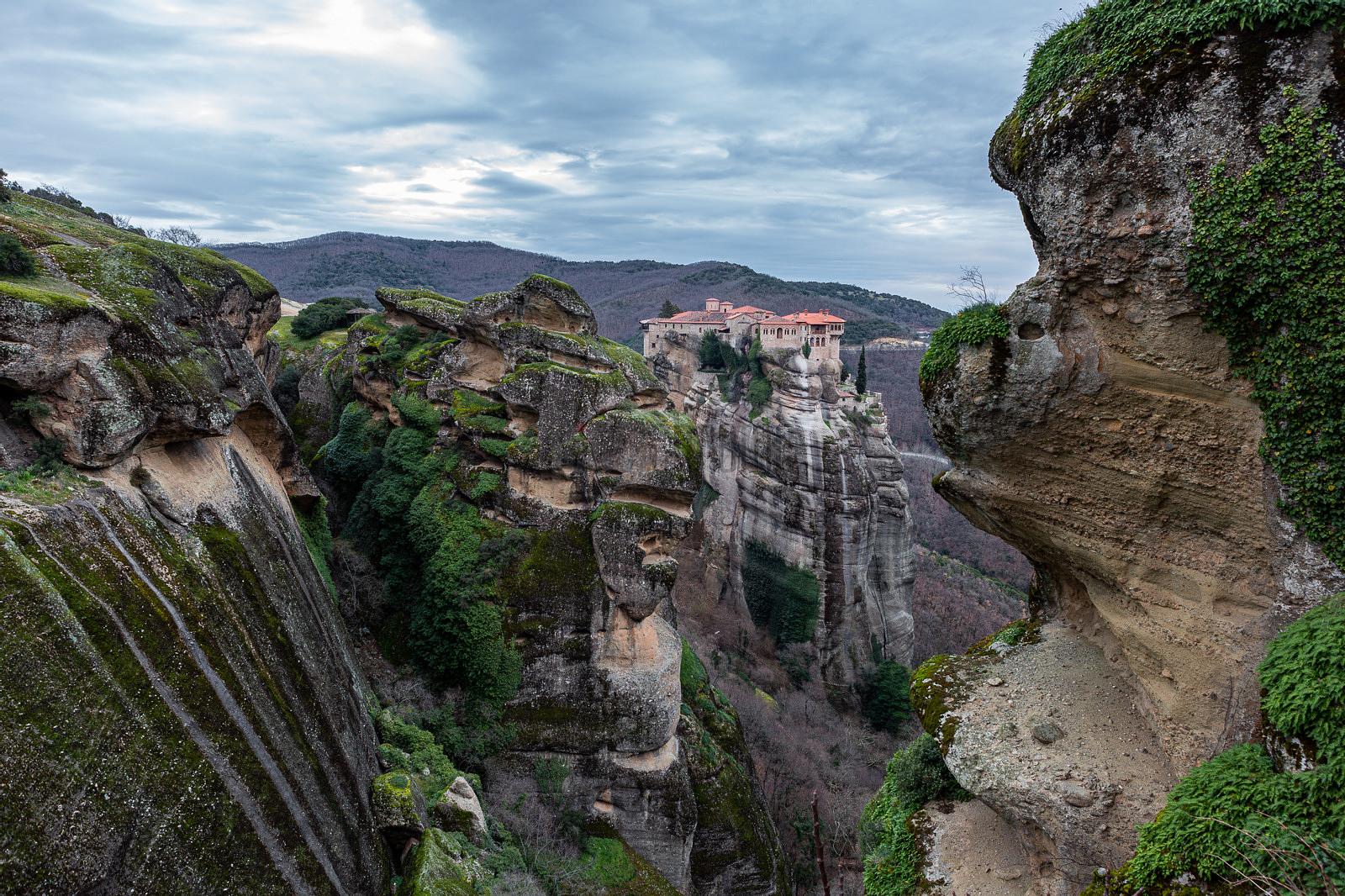 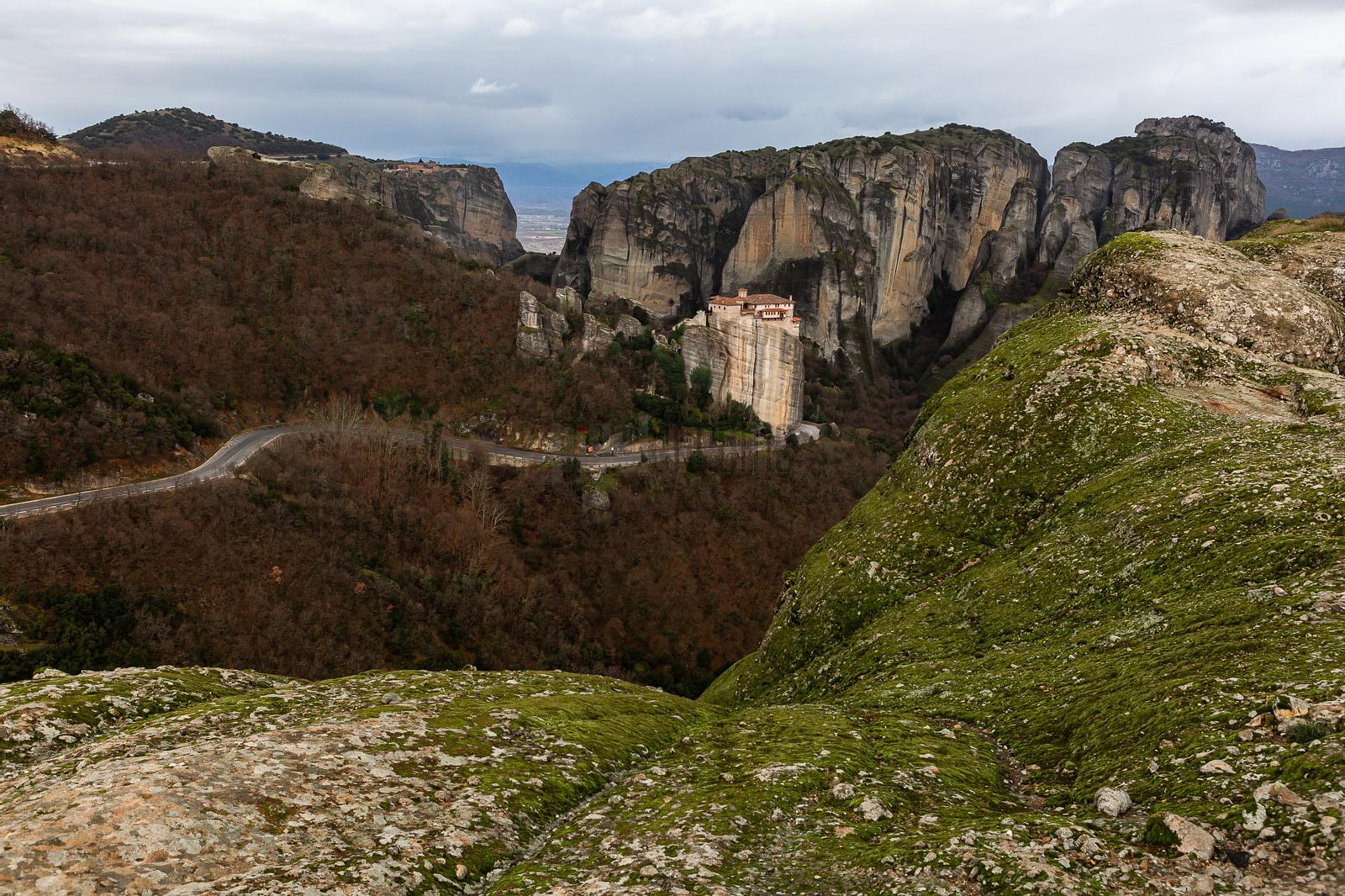 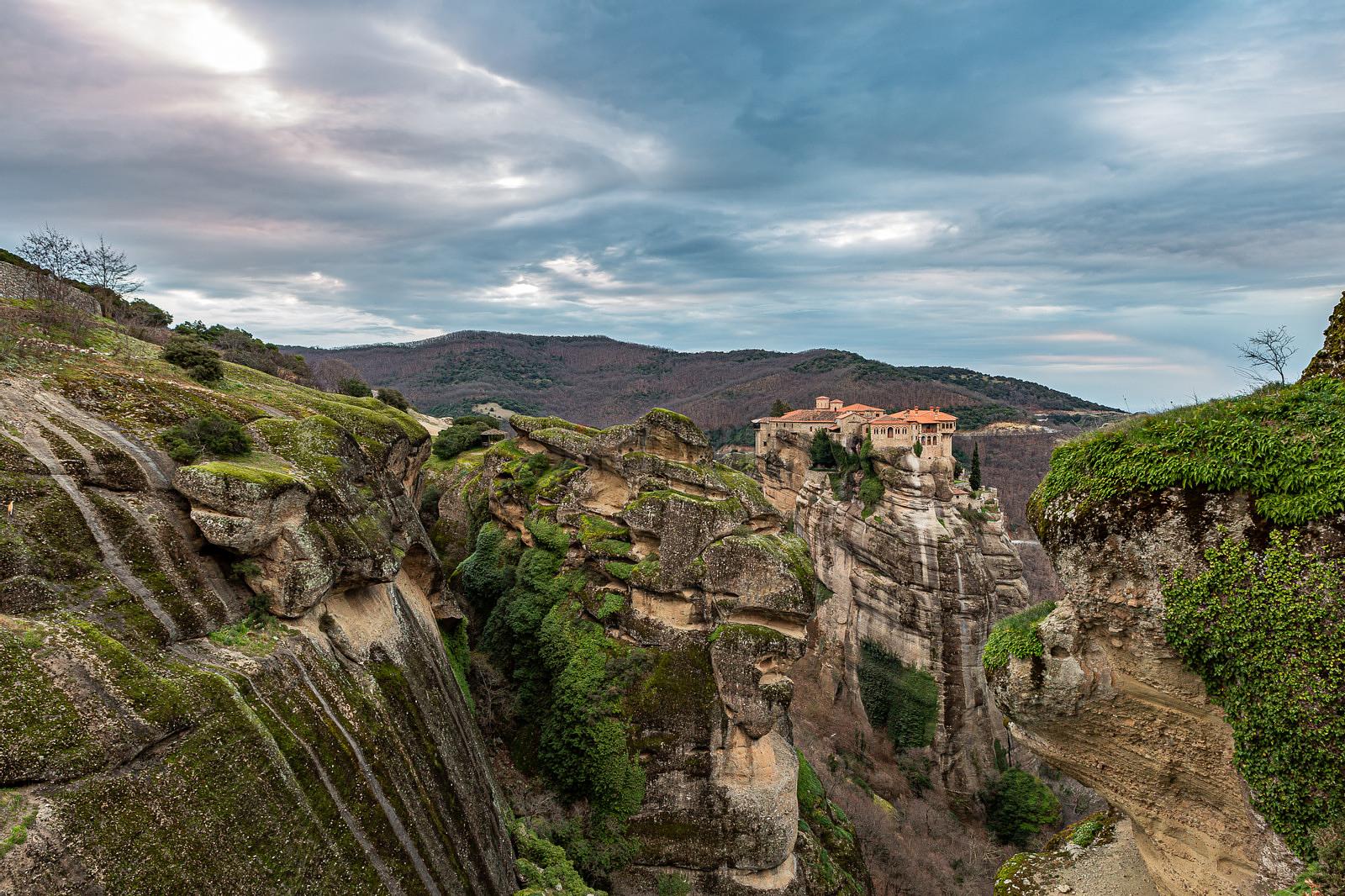 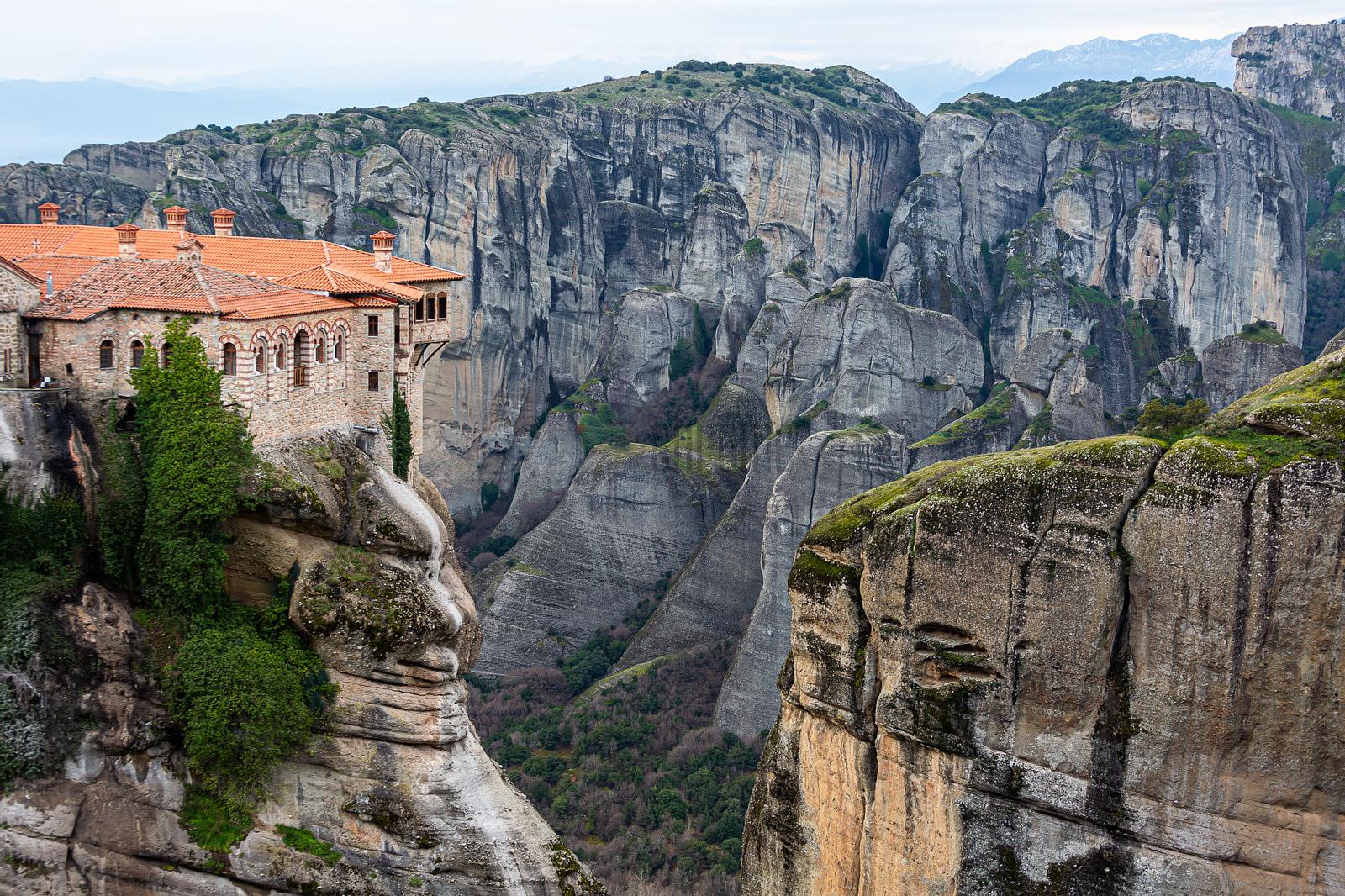 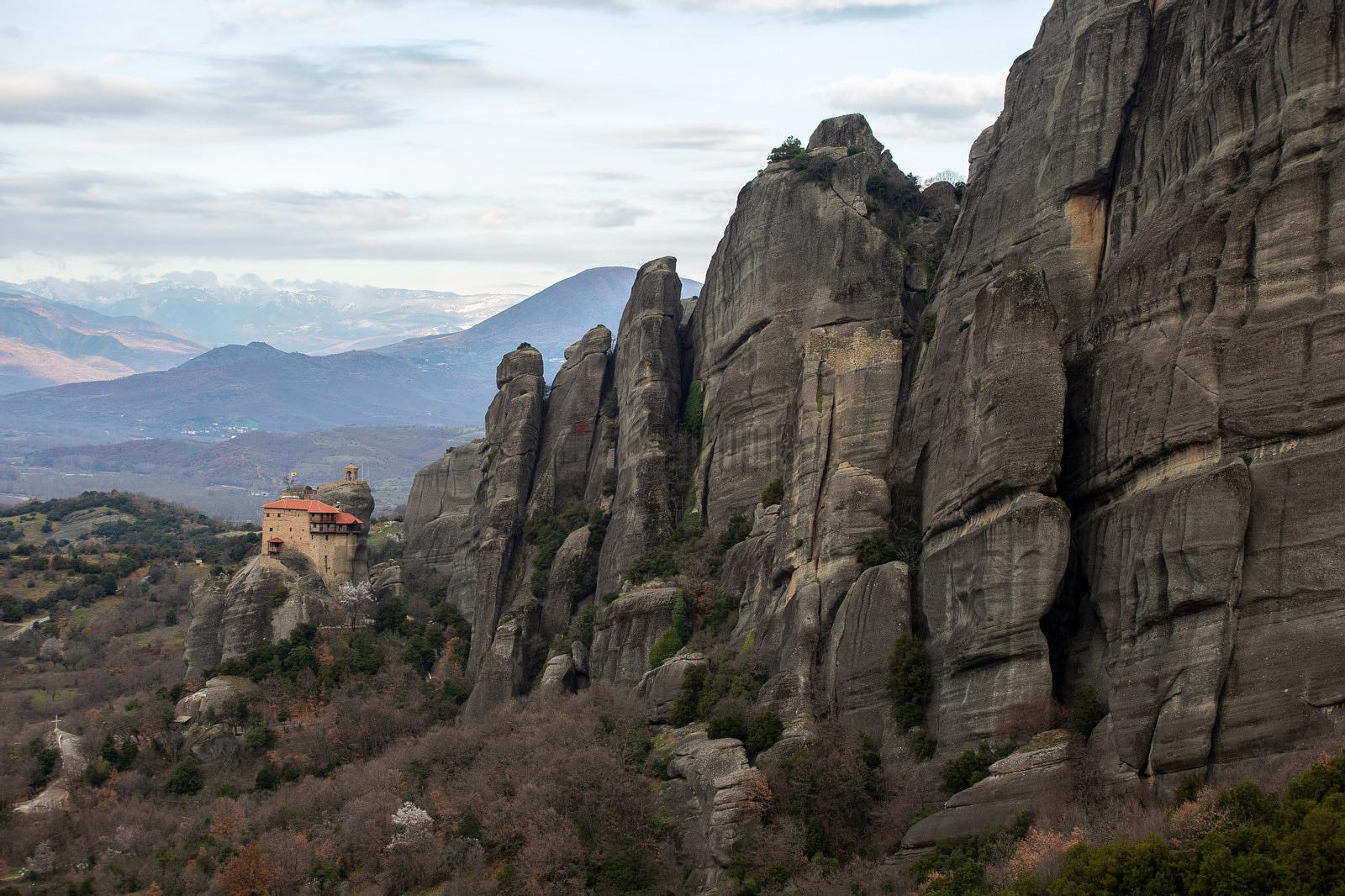 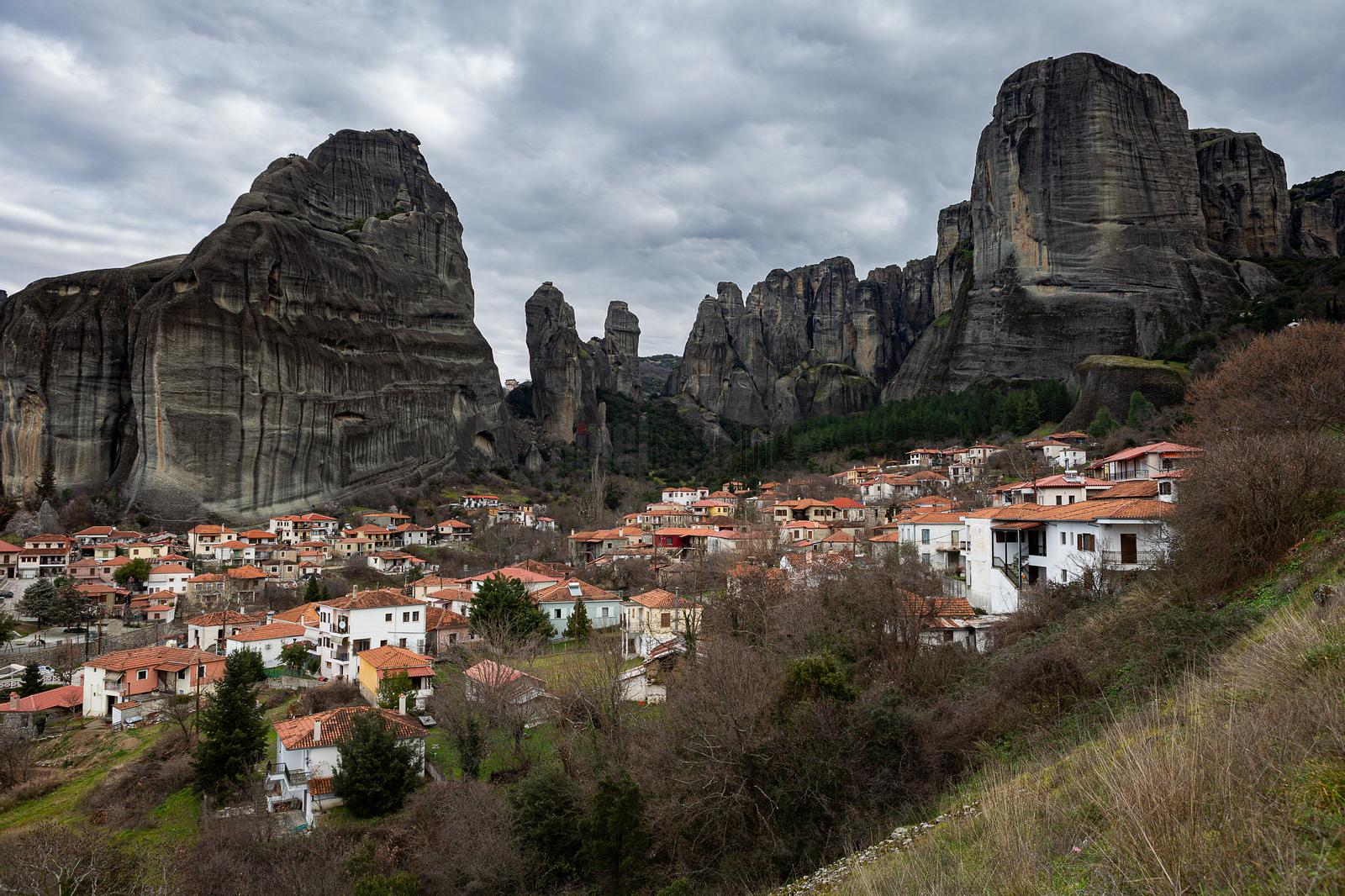 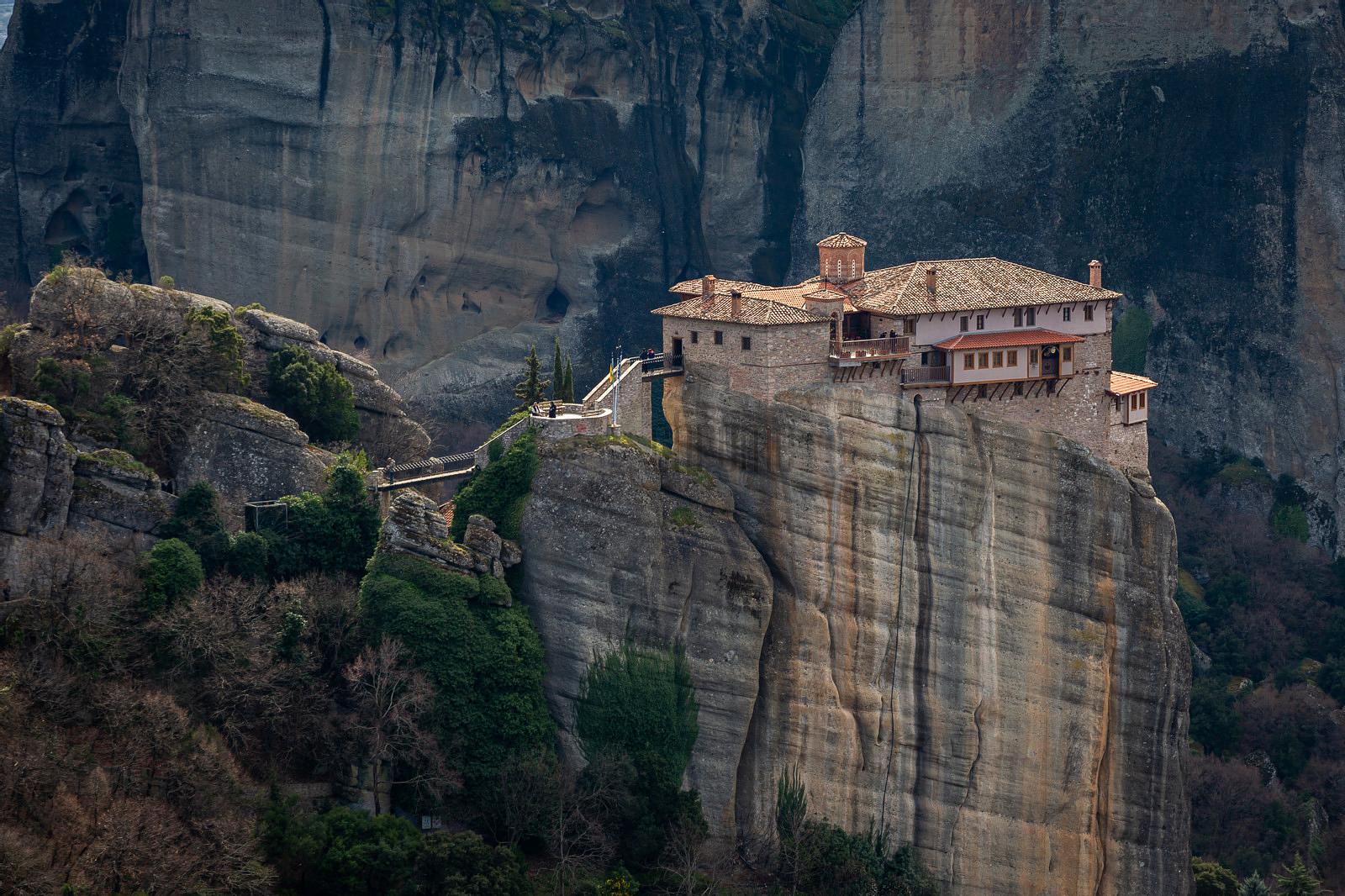 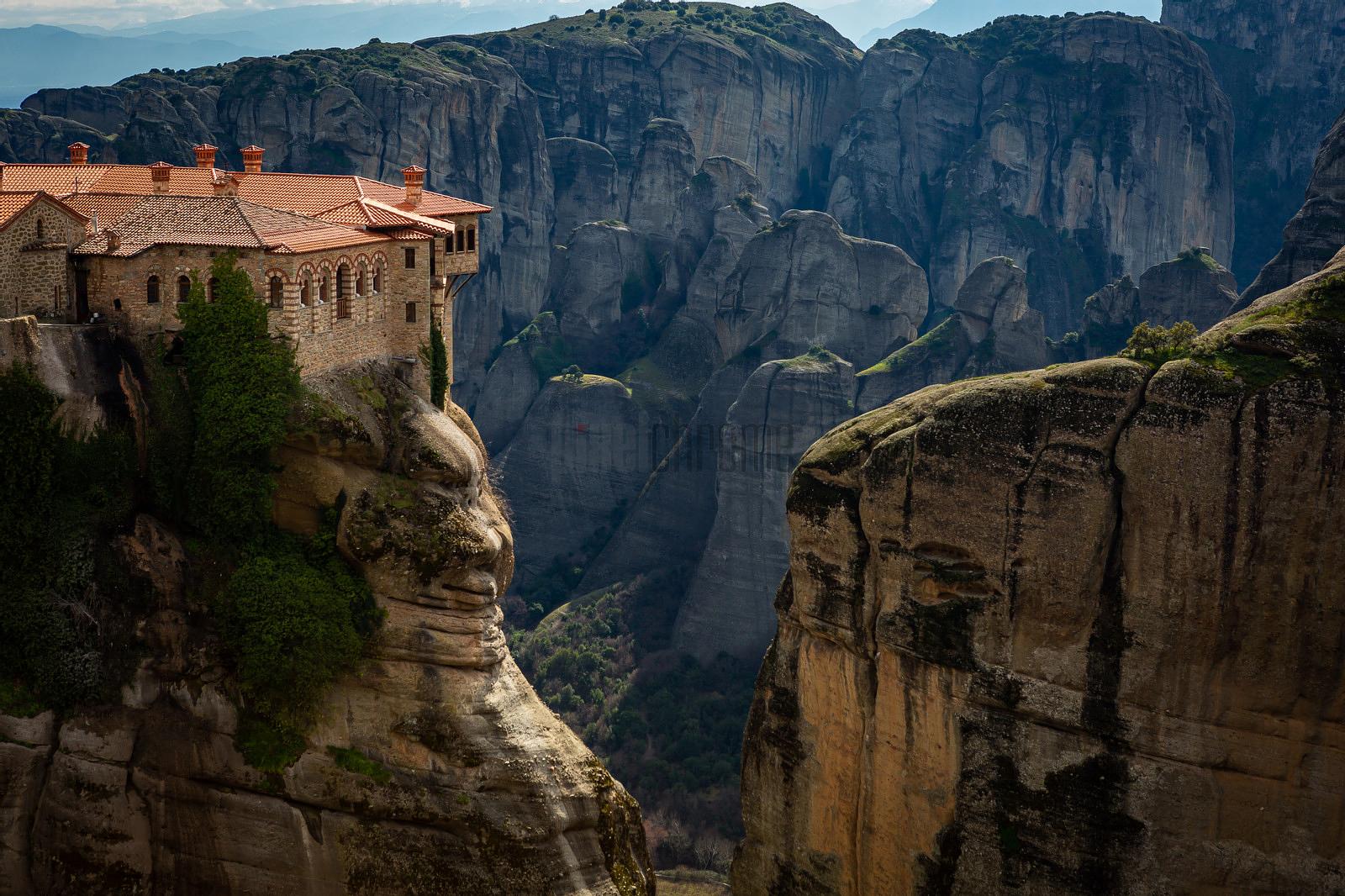 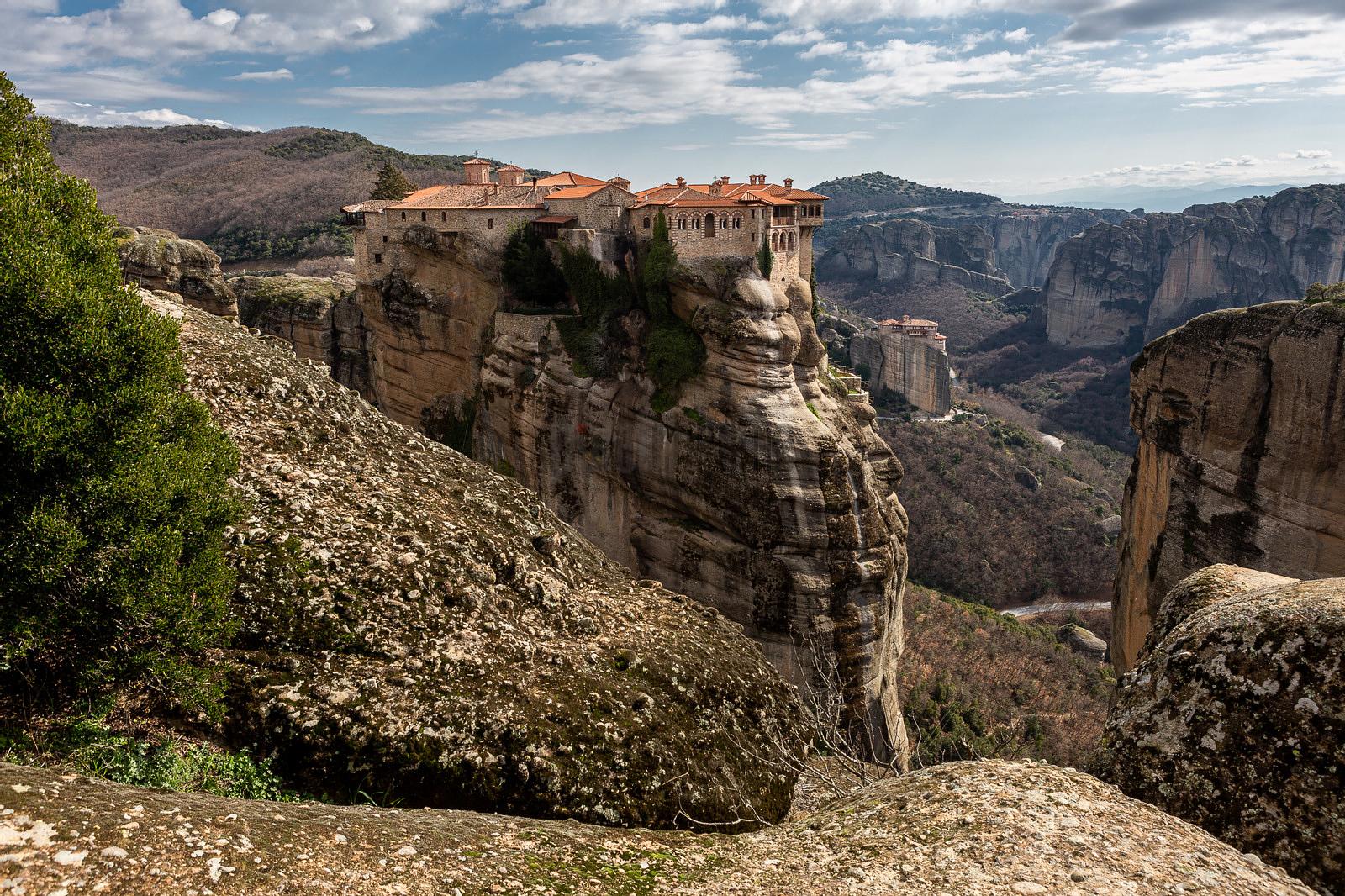 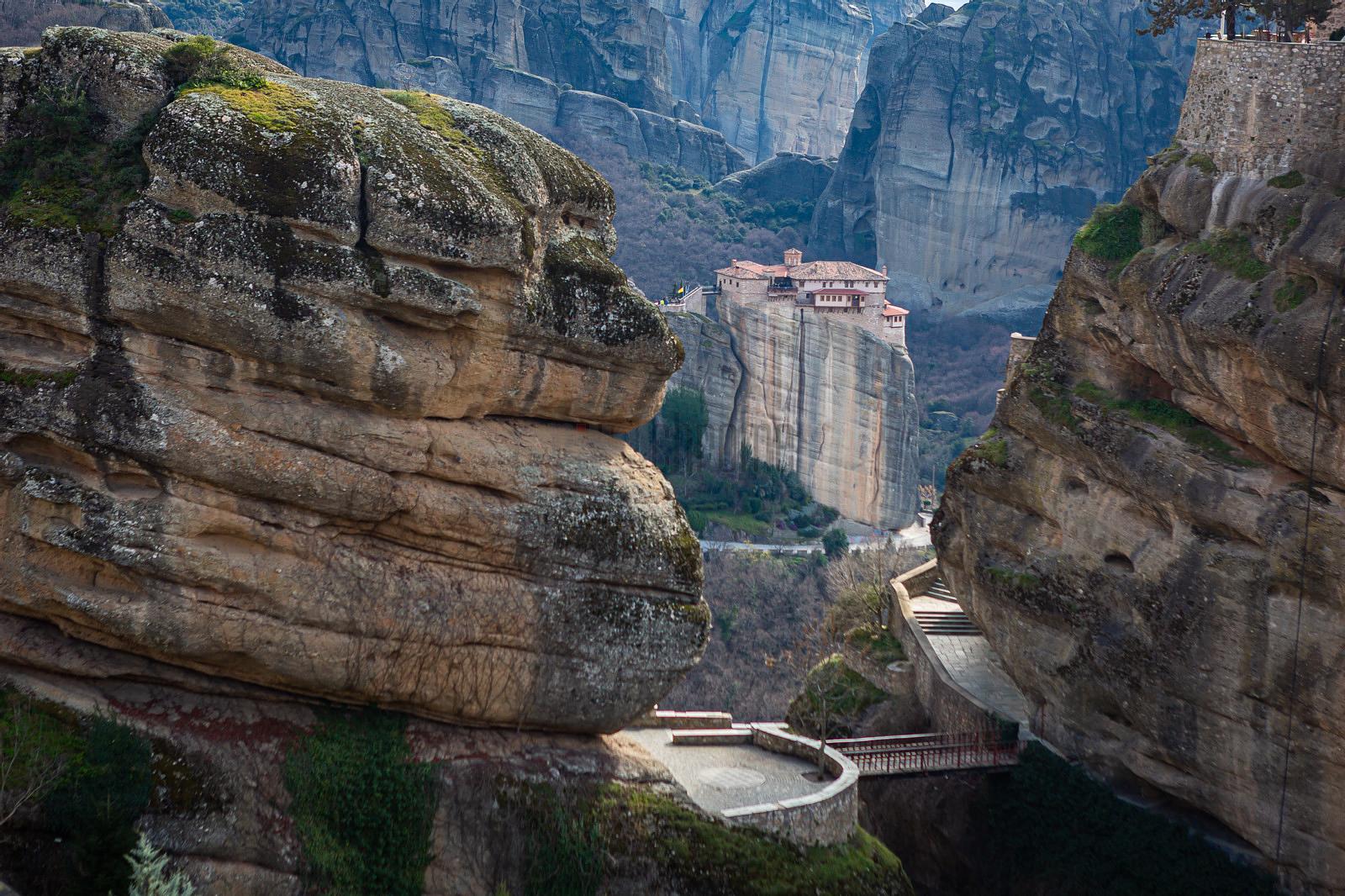 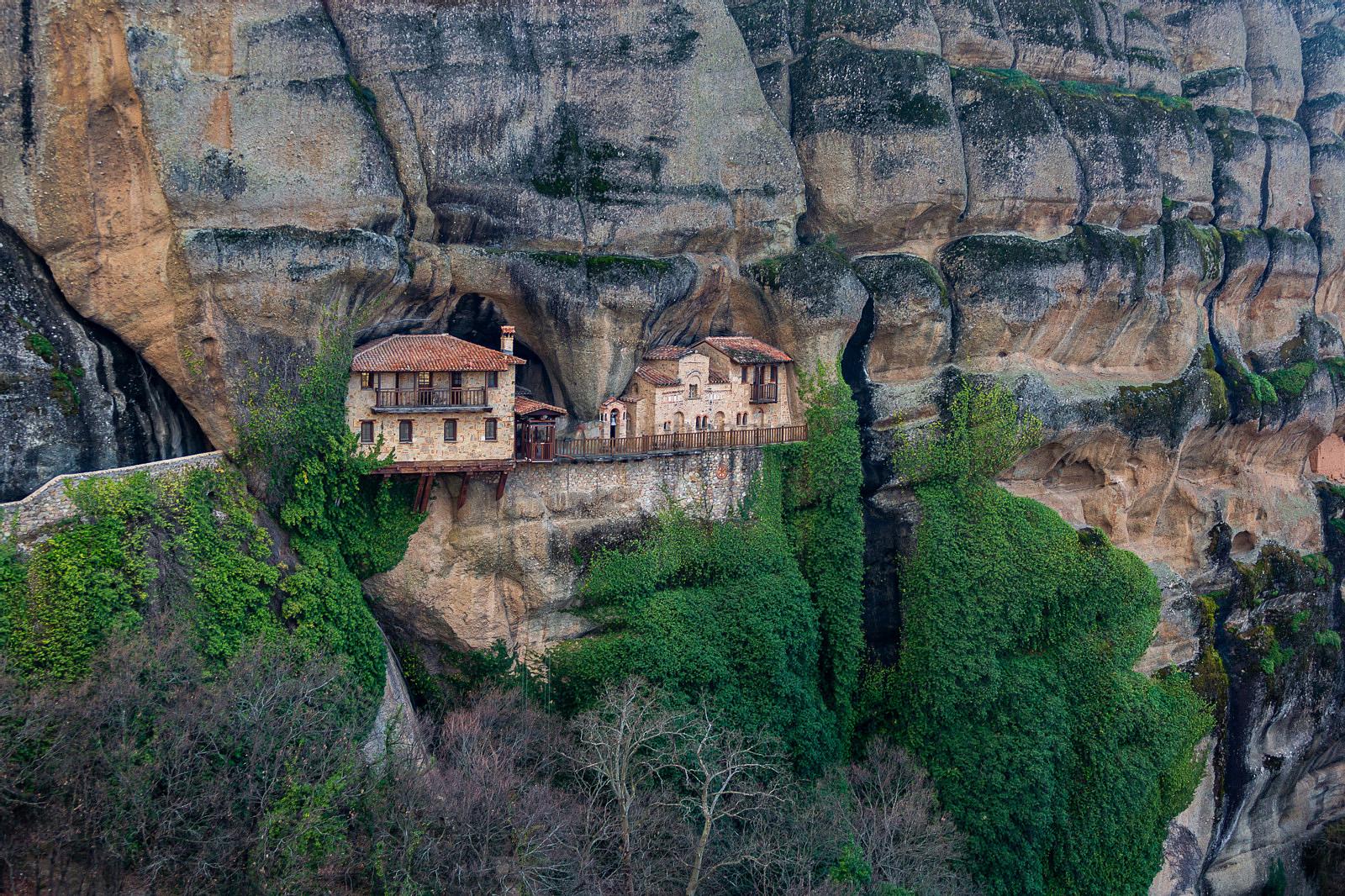 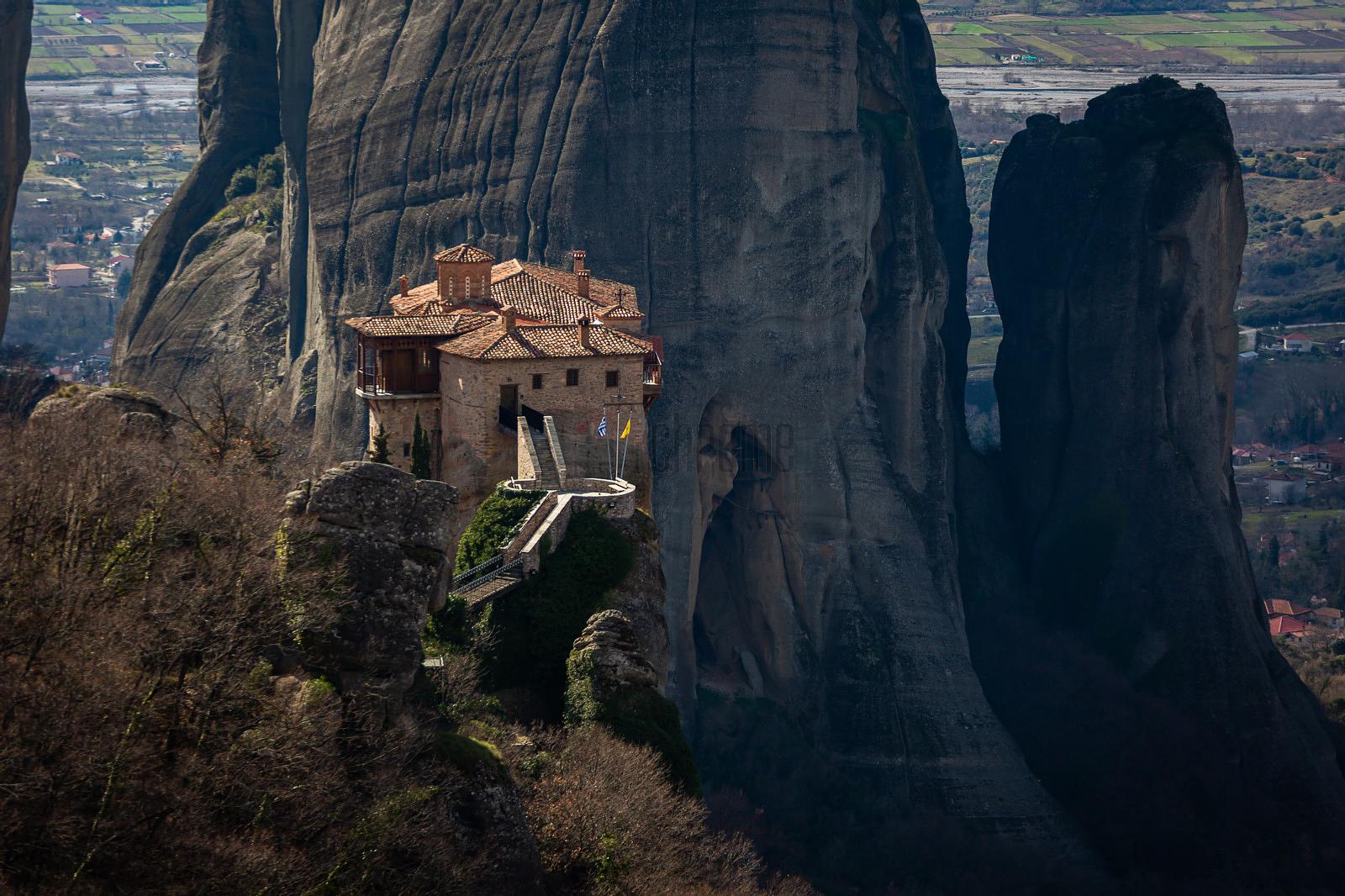 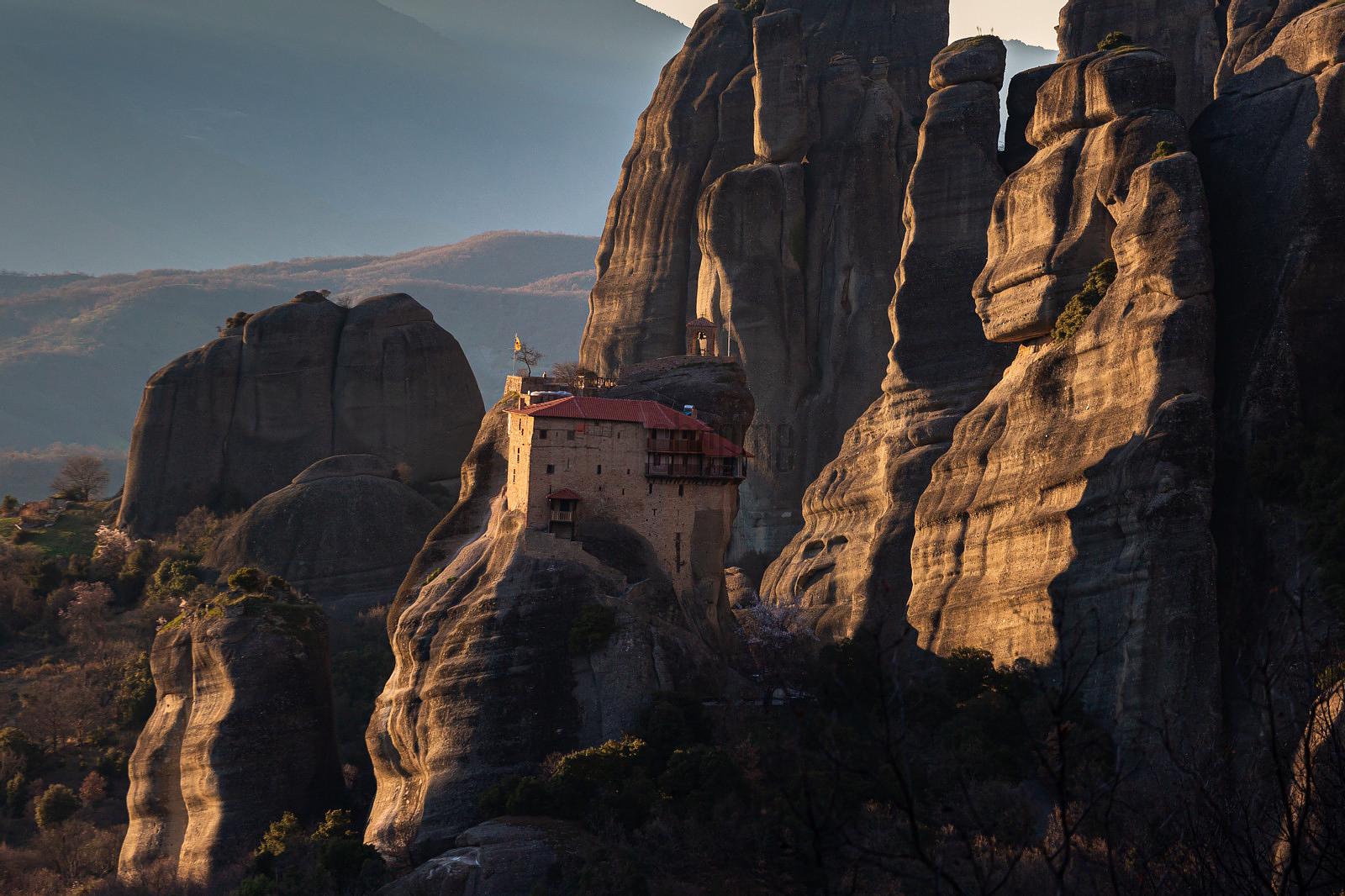 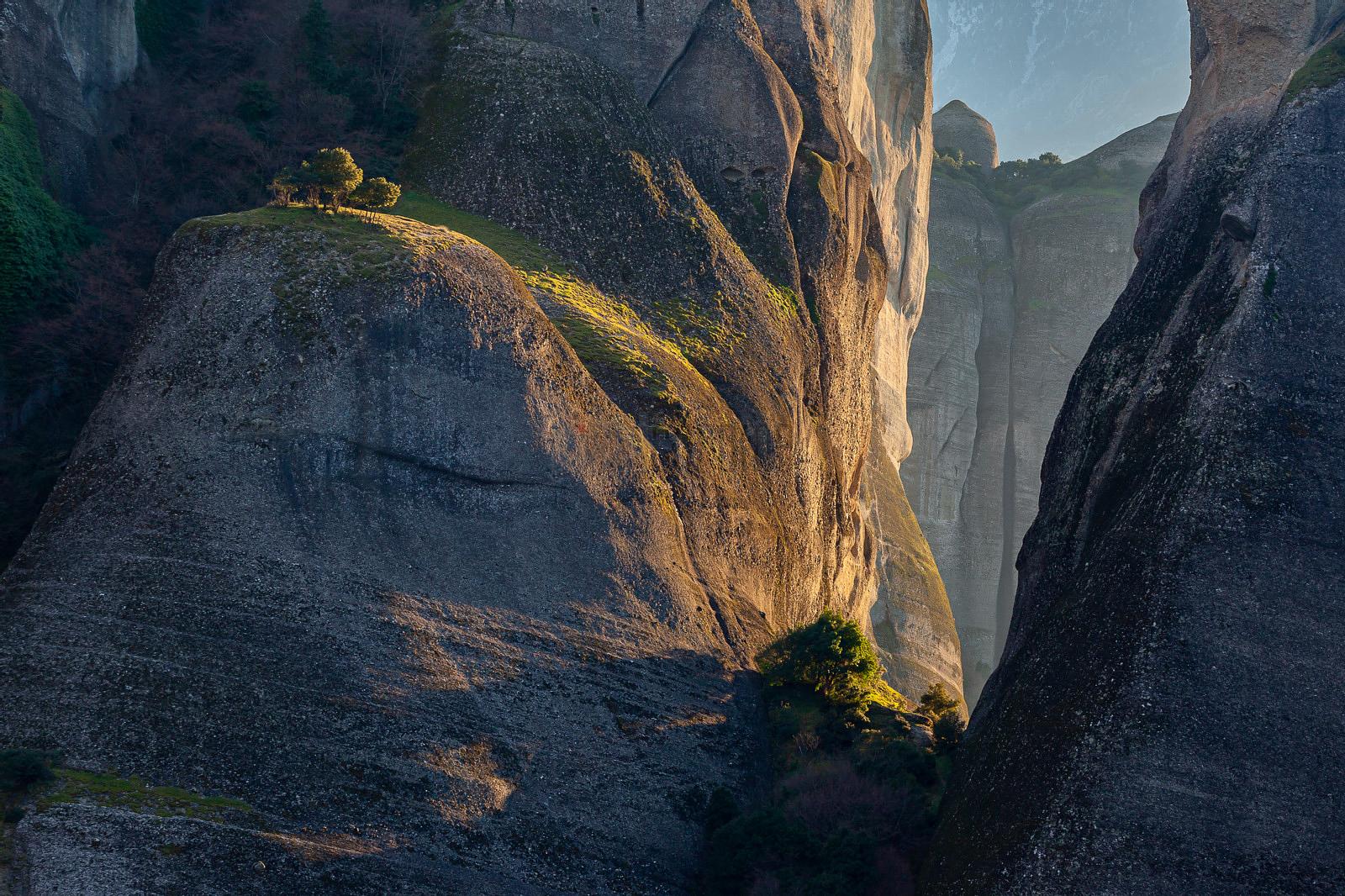 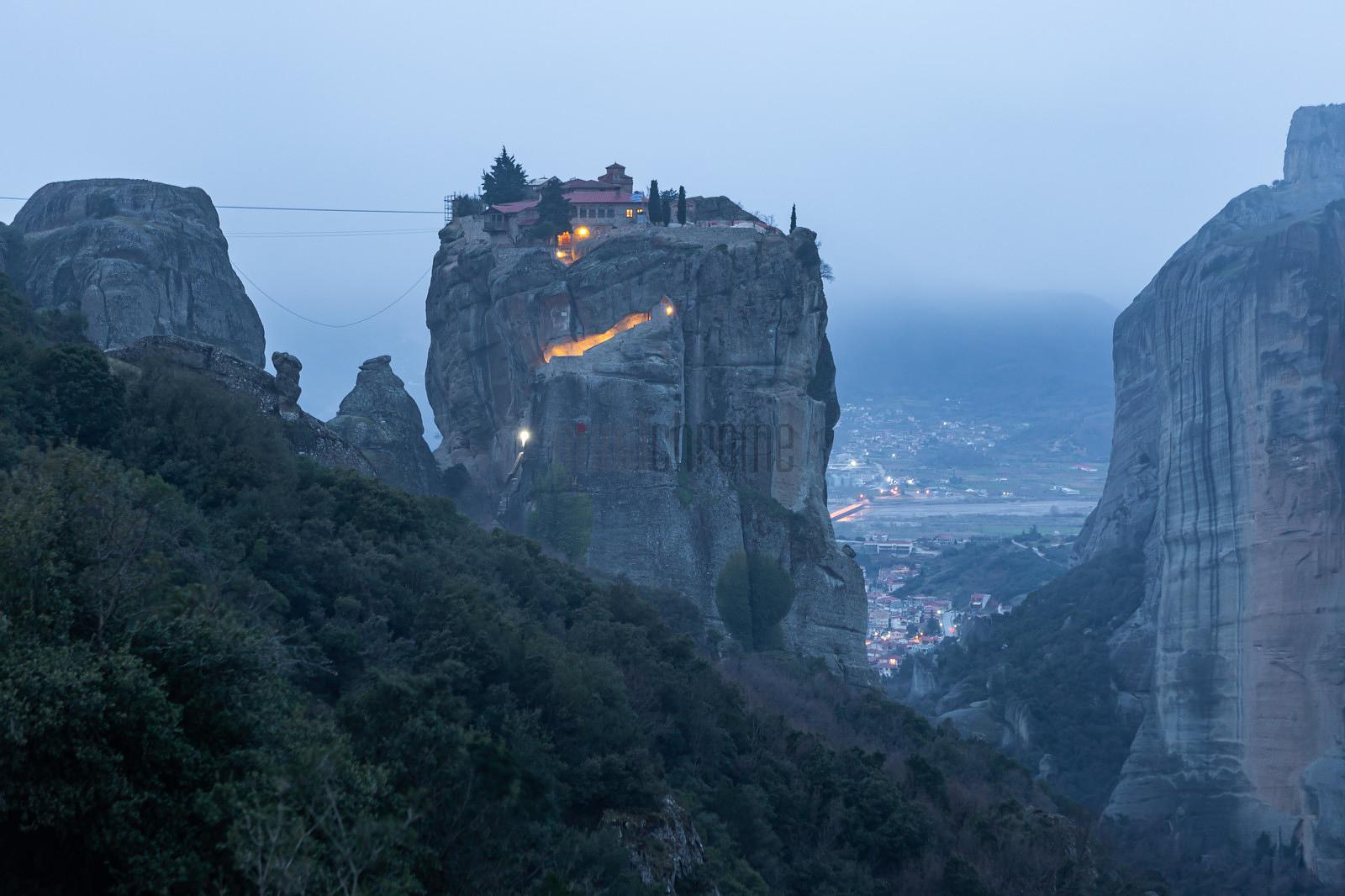 Meteora is a unique area in Central Greece with Eastern Orthodox monasteries built on top of dramatic sandstone pillars of rock some reaching over 500 m high. Meaning "lofty", "elevated", Meteora offers absolutely breathtaking panoramic views, details and patterns, a dream for every photographer wishing to capture the variety of light conditions in this mysterious place.

Six different monasteries are now left— the rock formations were formed some 60 million years ago when a series of earth movements pushed the seabed upward, creating a high plateau and causing many vertical fault lines in the thick layer of sandstone. Huge rock pillars were then formed by water, wind, and extremes of temperature on the vertical faults.

The first documented people to inhabit Meteora after the Neolithic Era were an ascetic group of hermit monks who, in the ninth century AD, moved up to the ancient pinnacles. They lived in hollows and fissures in the rock towers, some as high as 1800 ft (550m) above the plain. As early as the eleventh century, monks occupied the caverns of Meteora. However, monasteries were not built until the fourteenth century, when the monks sought somewhere to hide in the face of an increasing number of Turkish attacks on Greece. At that time, monasteries were accessed via removable ladders or windlass.

At the end of the fourteenth century, the Byzantine Empire's reign over northern Greece was being increasingly threatened by Turkish raiders who wanted control over the fertile plain of Thessaly. The hermit monks, seeking a retreat from the expanding Turkish occupation, found the inaccessible rock pillars of Meteora to be an ideal refuge. More than 20 monasteries were built, beginning in the fourteenth century but only six remain today. Until the seventeenth century, the primary means of conveying goods and people from these eyries was by means of baskets and ropes.

The uniqueness of Meteora listed it as a monument for World Heritage by UNESCO.

During World War II the site was bombed and many art treasures were stolen. In the 1920s steps were cut into the rock, making the complex accessible via a bridge from the nearby plateau. 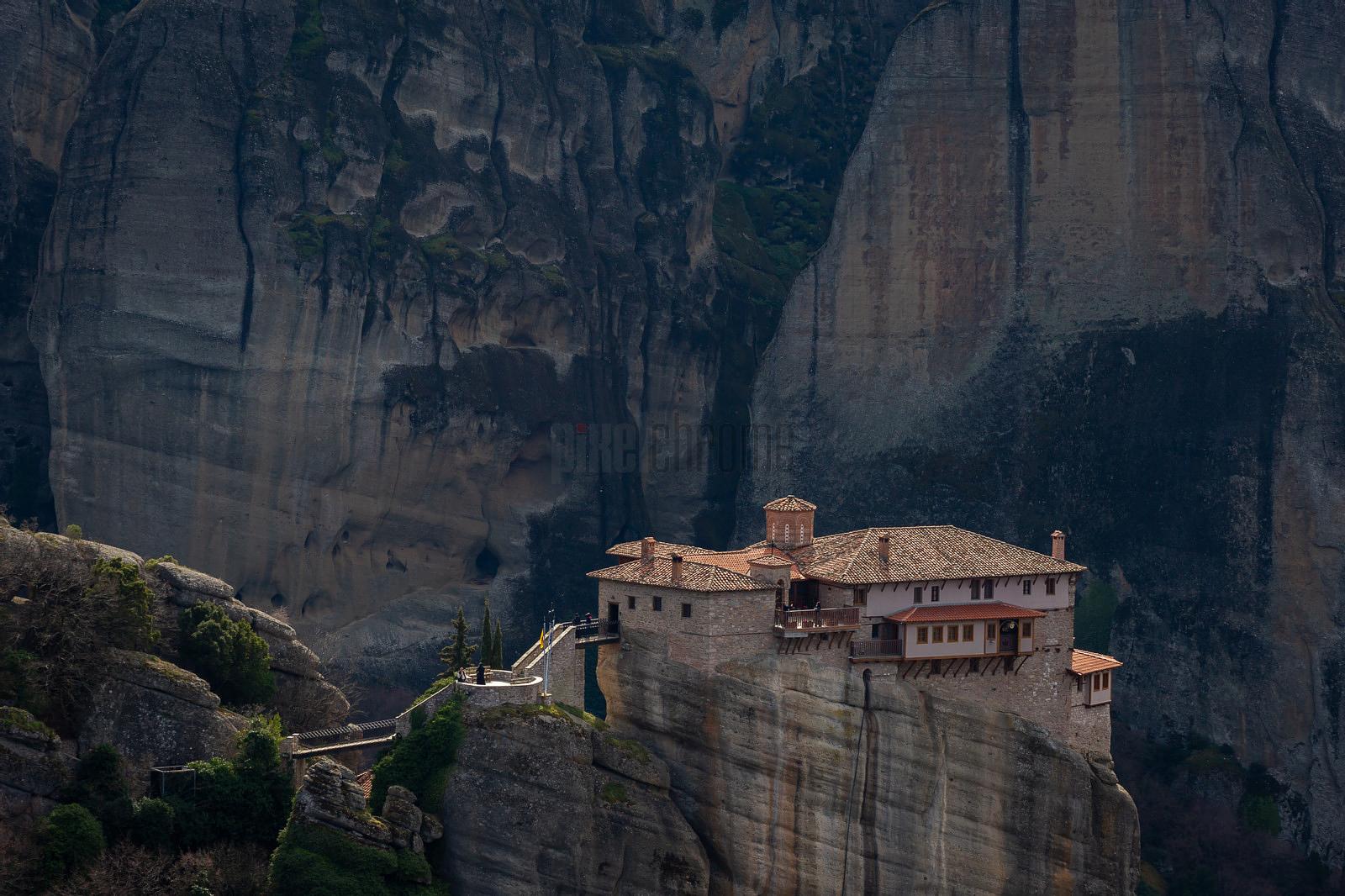 Day 1: Oct 30 – Melnik/Meteora (3 hours)
This morning we transfer to Meteora (Kalambaka village). We aim to arrive early enough for the first session for the trip. For sunset we are positioned at one of the most enigmatic places at Meteora Rock Monasteries with view over a deep valley and the cliff top monasteries. This first visit will be just a teaser for the following day when we explore the small bits and pieces of the area with some hidden corners of the area rarely visited by the crowds.
O/N Grand Meteora Hotel (3 nights)
Grand Meteora Hotel is located at the foot of Meteora, in the heart of the Thessaly plain. It is the most imposing and impressing accommodation in the area, next to the picturesque village of Kastraki, and only 3 kilometers away from the historic center of Kalambaka.
Day 2: Oct 31 – Meteora
Photography around Meteora cliff-top monasteries. We start and end the day to make use of the best light conditions. Thus, be prepared for long days including early mornings and late evenings. Where suitable we can take some time off at the time of the harsh light in the middle of the day.
Photography includes loads of architecture details, panoramic views of breath-taking landscapes and local culture.
O/N Grand Meteora Hotel
Day 3: Nov 1 – Meteora
We will make another early morning start for sunrise at the cliff-top monasteries
O/N Grand Meteora Hotel
Day 4: Nov 2 – Meteora/Rila Monastery/Sofia
After an early breakfast we head back to Sofia, but not before stopping at one of the UNESCO World Heritage sites in Bulgaria, Rila Monastery. With its colorful paintings and its situation at the bottom of a valley in Rila mountains it presents superb opportunities for photography. 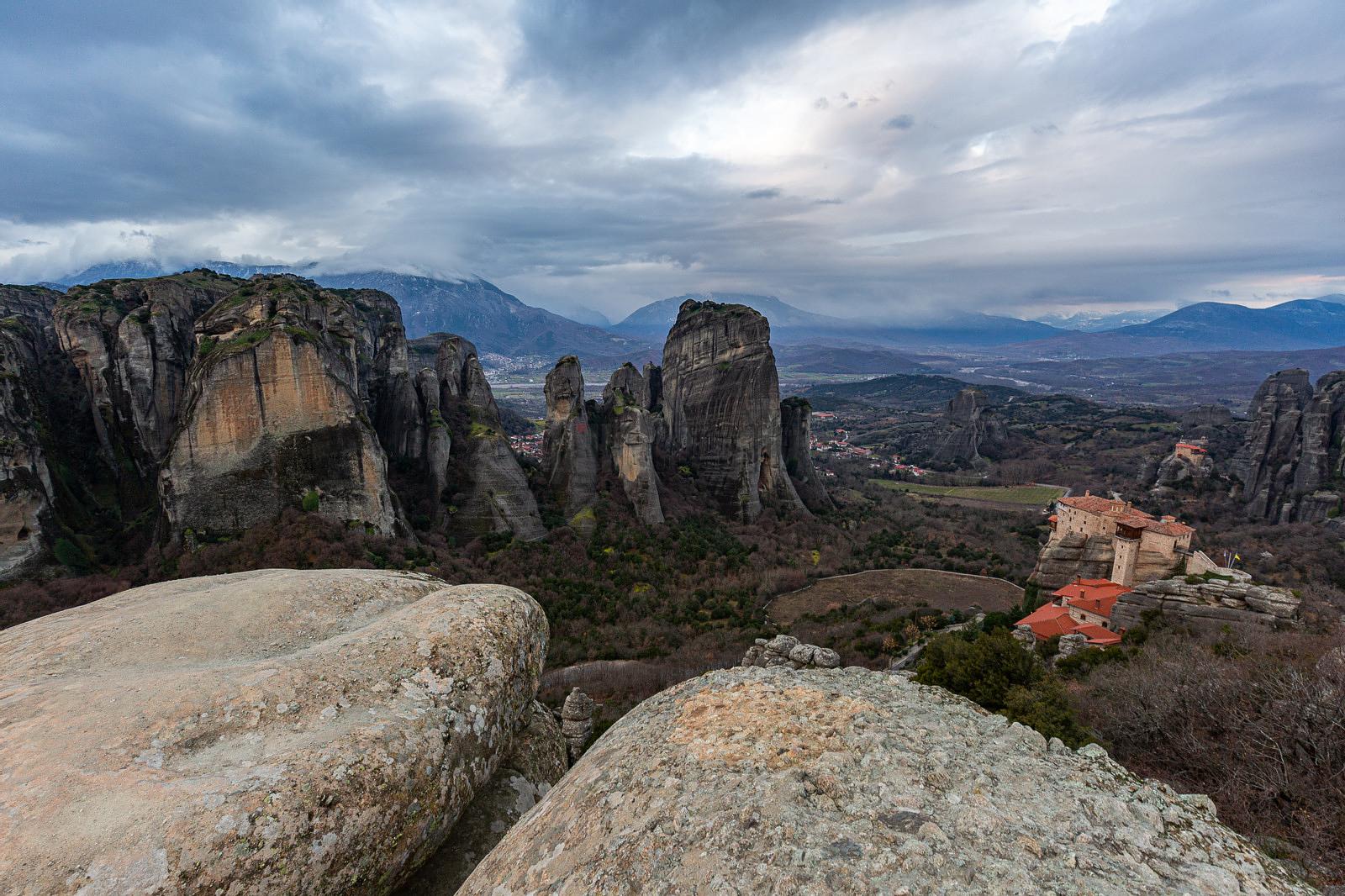 ​Arrival & Meeting Place
Most international visitors enter and leave Bulgaria via Sofia Airport, and there are frequent flights to the capital from other European cities.

Visa
Visas are not required for EU citizens. Citizens of Australia, Canada, New Zealand and the USA can visit visa-free for up to 90 days.

Weather
Spring and autumn have warm weather and a calendar of cultural celebrations. Spring melt can be hazardous; otherwise, weather is ideal for outdoor exploration. Sights and attractions open again after winter, with fewer tourists than high summer. Just be aware that rain showers are possible so be prepared with a raincoat.

Language
Greek is the official language in the country. The earliest surviving texts of the Greek language can be traced to the Mycenaean Civilization around 1300 BC.

​Currency
Price for the Greek extension is 1200 EUR

The area is rather hilly and includes steep stairs if you would like to reach the monasteries. It is important to note that some of the viewpoints include steep drop downs and photography is sometimes from the edge of uneven surfaces. If you have challenges with such places, you can always photograph from the road which offers plenty of opportunities.