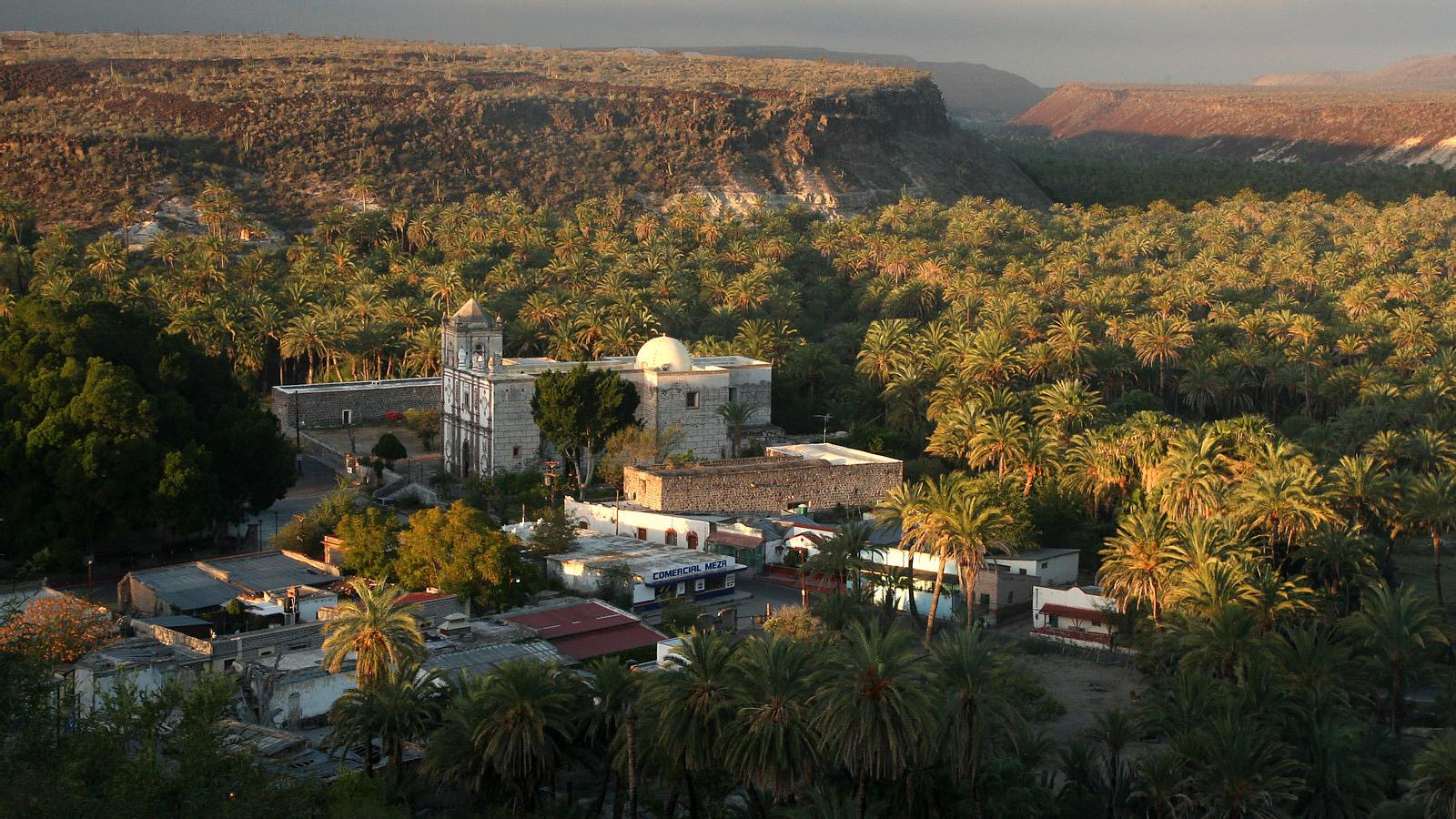 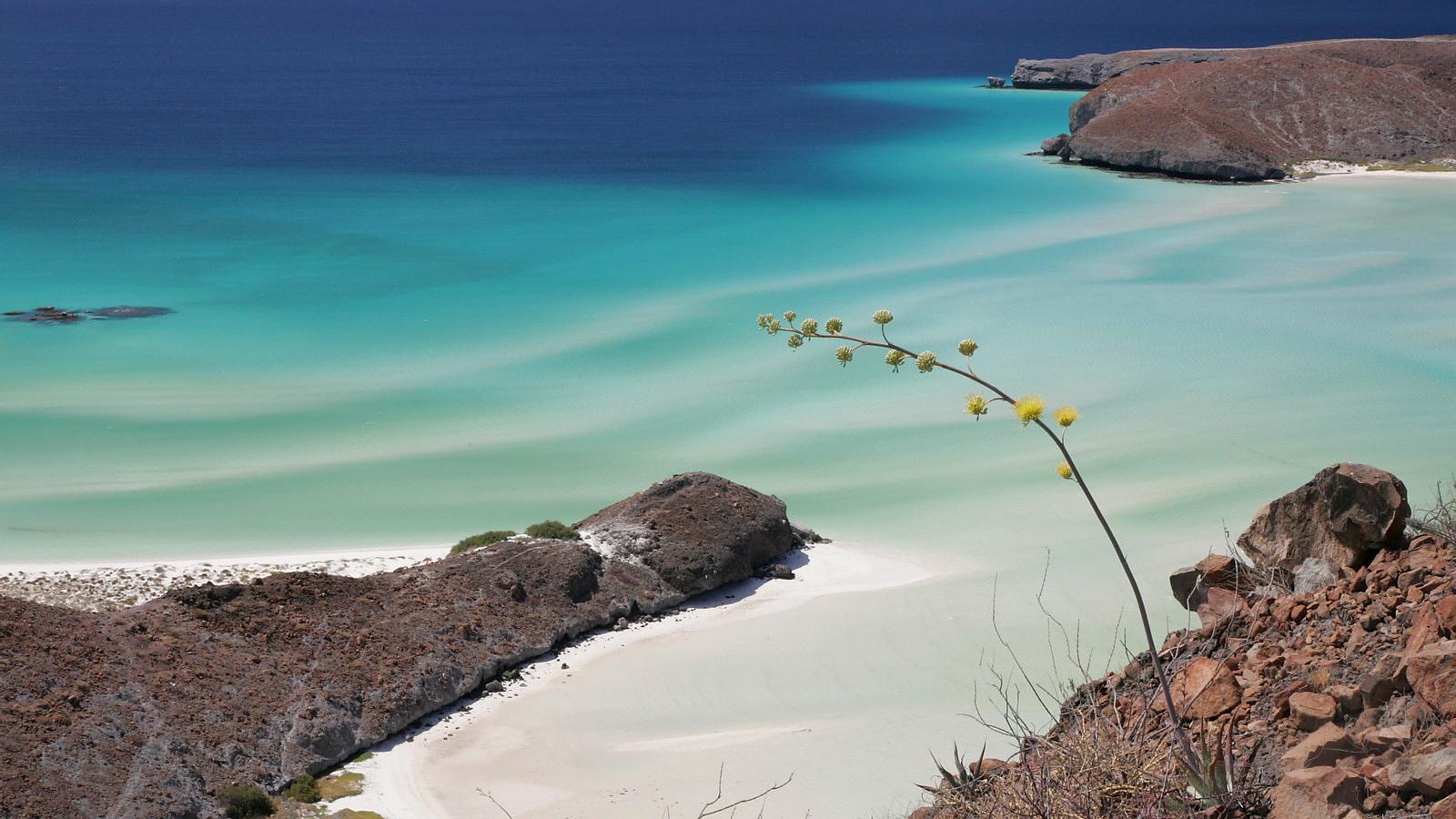 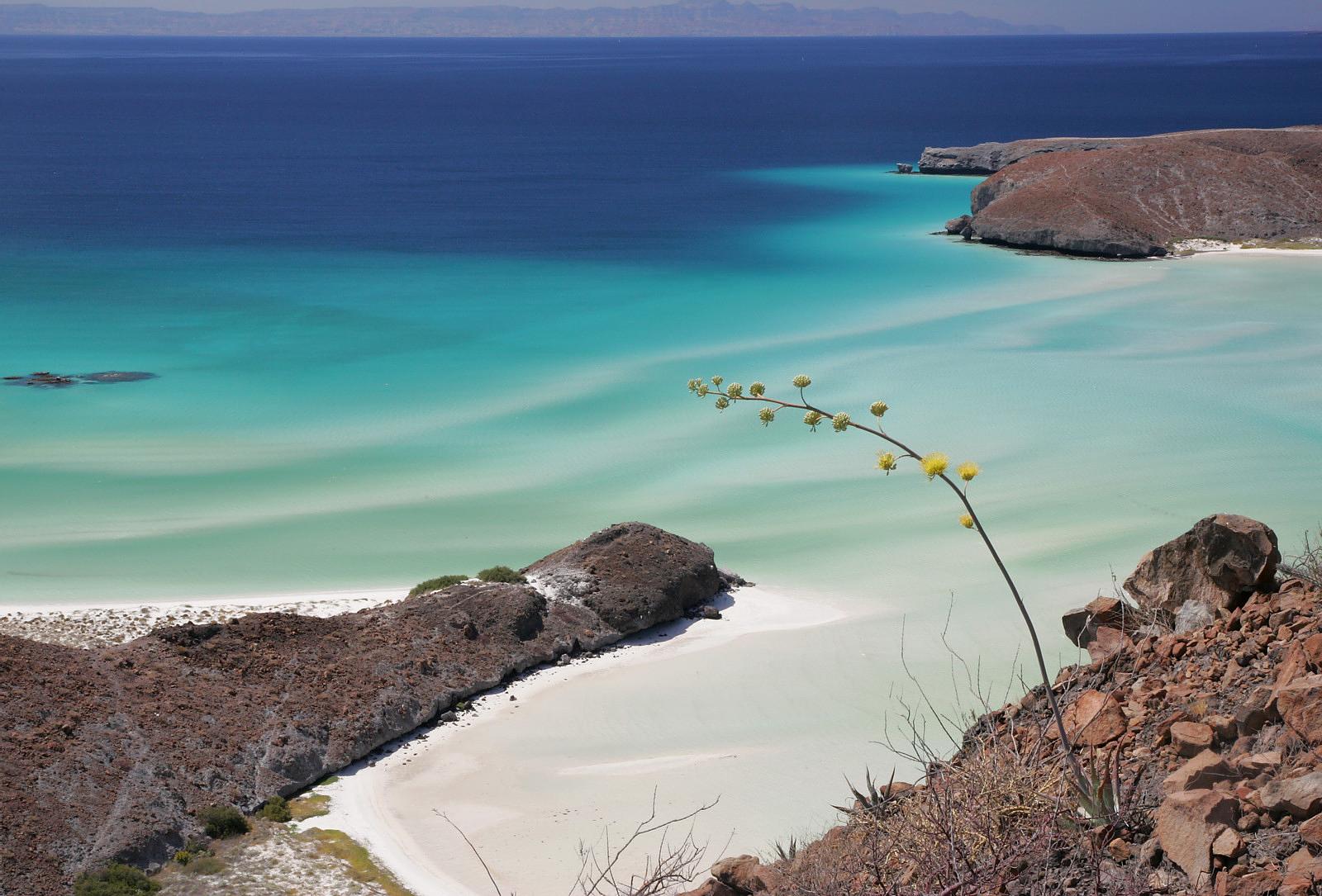 Introduction
Baja California evokes a rugged, wild west kind of adventure. Stretching some 760 miles south from the US border, this Mexican peninsula is a land of compelling contrasts — a dry, mostly desert geography with hidden enclaves of lush vineyards, jagged mountains and solemn cactus forests bordered by crystalline waters and wide sandy beaches.

Baja is at once a sparsely-populated no man’s land, and home to thousands of species of marine life and millions of vacationing tourists.

Welcome to Southern Baja
Cardón cacti, boojum trees, ocotillo, cholla and other desert marvels thrive in this beautiful desert area that sometimes doesn’t receive any rain for a decade. Look out for crumbling missions, date palms, coconuts and mangrove swamps as you meander northwards.

The 25,000-sq-km Reserva de la Biosfera El Vizcaíno is one of Latin America’s largest protected areas. It sprawls from the Península Vizcaíno across to the Sea of Cortez and includes the major gray-whale calving areas of Laguna San Ignacio and Laguna Ojo de Liebre, and the Sierra de San Francisco with its stunning pre-Hispanic rock art.

The southernmost part of the peninsula contains the cosmopolitan city of La Paz, small seaside towns and villages, and the popular resorts of San José del Cabo and Cabo San Lucas, aka ‘Los Cabos.’ After the quiet isolation of the state's north, Los Cabos will either be a jarring shock or a welcome relief.

Day 1: 11 Nov, 2021 – San Jose del Cabo/Todos Santos/La Paz (110 miles)
Today we drive to La Paz stopping off on the way for lunch at the "Pueblo Magico" of Todos Santos, a mix of sleepy Mexican village and chic Southern California boutique hotel, where dusty roads and charming cobblestone share the same block. Sprinkle some yoga studios and art galleries, with beat-up pickup trucks off-roading on deserted beaches – and you begin to get a picture of Todos Santos.

The capital of Baja Sur, La Paz, like Ensenada, is an example of a major city that has maintained its smaller-town Baja feel. With a charming malecón and a seaside main strip, La Paz is a relaxing vacation alternative to uber-touristy Cabo San Lucas. La Paz is the launching pad for Isla Espiritu Santo, one of the 244 islands that form a Unesco biosphere reserve famous for its overwhelming selection of marine life (French explorer Jacques Cousteau called the Sea of Cortez “the world’s aquarium”).

Day 2: 12 Nov, 2021 – La Paz
Today we take a boat trip to Isla Espirito Santo and Los Islotes, where there is a huge sea lion colony. We will let you snorkel with the sea lions if you don't mind the cool waters.

Once we get back from the boat trip, we will head up the coast to Balandra Bay. It is breathtaking there. With the high midday sun the beautiful turquoise waters will be enhanced. We will have lunch at a great restaurant on the beach.

In the evening we will hang out at Playa Tecolote where the boats go from and they also have great seafood restaurants with tables on the sand (and great margaritas).

Espiritu Santo National Park in the Sea of Cortez is part of a UNESCO World Heritage Site, and is one of the best marine life viewing destinations in the world. Whales, dolphins, whale sharks, sea turtles, manta rays and plenty of beautiful tropical fish call the surrounding waters home*, while a terrific range of bird species including Blue-footed Boobies, Reddish Egrets, Great Blue Herons and Yellow-footed Gulls frequent the island’s skies and shores.  The island itself is stunning, with magnificent towering cliffs, spectacular sandy bays, amazing lava rock formations, and rock art left by the now-extinct Guaycura and Pericu Indians. There’s even an endemic ring-tailed cat, the babisuri. It’s a remarkable place to explore.

Day 3: 13 Nov, 2021 – La Paz/Mulegé (300 miles)
After sunrise and breakfast we will leave La Paz and drive the 300 miles to Mulegé. It will be a long day but we will break up the journey by stopping along the way for any photo ops that arise. As we approach Mulegé from the south, we’ll pass some of the peninsula's most beautiful, turquoise-lapped playas (beaches) along Bahía Concepción, The pelican colonies, funky rock formations and milky, blue-green water make it a top stop for kayakers, even though several of the beaches are becoming more built up.

Mulegé
The palm- and mangrove-lined Río Mulegé, with its delta, birds, wildlife and nearby snorkeling and diving opportunities, makes Mulegé a great stop for the outdoorsy or those with kids. Set down in a narrow arroyo (stream), Mulegé is prone to flooding when it gets pummeled by hurricanes and major storms (which tends to happen every two to three years). The river setting plus the 18th-century mission and town square give the town a remote, old-town feeling unique in Baja.

Day 4: 14 Nov, 2021 – Mulegé/San Ignacio/Guererro Negro (180 miles)
After photographing sunrise at the Misión Santa Rosalía de Mulegé and the viewpoint over the river and palm oasis we will head back for breakfast. Since it is a Sunday, we will go to the mission church to photograph the mass which begins at 10am

By late morning we begin our drive to Guerrero Negro. We will stop for a late lunch at San Ignacio, another palm oasis in the middle of the Baja desert. It has a small plaza with shade and a few restaurants, a museum and a well restored Mission church built in the 17th century.

If we arrive at Guerrero Negro in time we will try and photograph the resident, nesting ospreys in the late afternoon light.

Guerrero Negro is best known for the whale watching, although its primary industry is salt. It is situated close to the Laguna Ojo de Liebre, a nesting and wintering site for harbor seals, California sea lions, northern elephant seals, blue whales and—what draws perhaps the most ecotourism—gray whales. The area also serves as a sanctuary for a variety of sea birds, and four endangered species of marine turtle. Laguna Ojo de Liebre, along with the Laguna San Ignacio to the south, was inducted into the UNESCO program in 1993.

Day 5: 15 Nov, 2021 – Guerrero Negro
Today we will explore the area possibly taking a boat trip out into the Laguna Ojo de Liebre. We will visit the salt production area, which this area is well known fro, and we will also have a chance to photograph the resident ospreys at their nests.

Day 6: 16 Nov, 2021 – Guerrero Negro/San Ignacio/Loreto (260 miles)
After an early morning start we will drive to the town of San Ignacio where we spend a couple of hours. Of note, we visit Misión San Ignacio de Kadakaamán. With lava-block walls nearly 1.2m (4ft) thick, the former Jesuit Misión San Ignacio de Kadakaamán stands directly across from San Ignacio's small plaza and is flanked by a grove of citrus trees. Occupying the site of a former Cochimí ranchería (indigenous settlement), the mission has been in continuous use since its founding in 1728. It's possibly the prettiest mission in Baja.

We will continue our road trip south to the town of Loreto. This town feels like somewhere between an old and new world. Linger along cobblestone streets, past shops selling pottery and a centuries-old mission to find local teenagers practicing a hip-hop act in the square. Perhaps sit at an outdoor cafe to try some local craft beer or stroll along the malécon (beach promenade) where an old man hobbles along with a cane and young women jog by in the latest workout gear. Out in that blue water is a water-sports paradise and the magnificent Parque Nacional Bahía de Loreto, where the shoreline, ocean and stunning offshore islands are protected from pollution and uncontrolled fishing.

Anthropologists believe the Loreto area to be the oldest human settlement on the Baja Peninsula. Indigenous cultures thrived here due to plentiful water and food. In 1697 Jesuit Juan María Salvatierra established the peninsula’s first permanent mission at this modest port backed by soaring mountains.

Day 7: 17 Nov, 2021 – Loreto
Early this morning we will take a sunrise boat ride out to Isla Coronados. In just twenty-five minutes from the Loreto Marina we will be among Sea Lions, exploring bird rookeries, and searching for dolphins. Snorkeling from the boat is a wonderful way to observe the Marine life below. After touring the island we make a picnic stop at the lovely white sandy beaches for more exploration.

In the afternoon we will visit Misión de Nuestra Señora de Loreto Conchó, or Mission Loreto. Dating from 1697, this was the first permanent mission in the Californias and was the base for the expansion of Jesuit missions up and down the Baja peninsula. Alongside the church, the Museo de las Misiones chronicles the settlement of the Baja Peninsula.

Towards sunset we will head out to photograph we visit San Javier Mission. The Jesuits started at Loreto and founded a total of 17 other missions in Baja California, including San Javier, which is about 20 miles from Loreto in the heights of the Sierra Giganta. After the Jesuits, the Dominicans and then the Franciscans under Junipero Serra and others went on northward building more missions in the northern Baja, and beginning in 1769 to build the famed chain of missions in what is today the US state of California.

COVID-19 Test for Re-entry into the US
NB sometime during the day we will be making an appointment to get a COVID-19 test at the hotel. Medical staff will come to the hotel and it costs $39US. Results are ready in less than three hours and will be sent to us via email. The hotel will also provide us with a copy of our test results.

Day 8: 18 Nov, 2021 – Loreto/La Paz (220 Miles)
The last night of our tour will once again be spent in La Paz where we will be able to relax and explore the town some more. Laid-back, old-world beauty can be found on a stroll along the waterfront malecón or in the older architecture around the Plaza Constitución; chichi restaurants, cafes and bars cunningly hide in between the cracks. It’s a surprisingly international town – you’re as likely to hear French, Portuguese or Italian here as English or Spanish, and yet paradoxically it’s the most ‘Mexican’ city in all of Baja. Its quirky history includes American occupation and even being temporarily declared its own republic.

After our final dinner you will have time to rearrange your gear before the morning transfer to the airport at San Jose del Cabo. 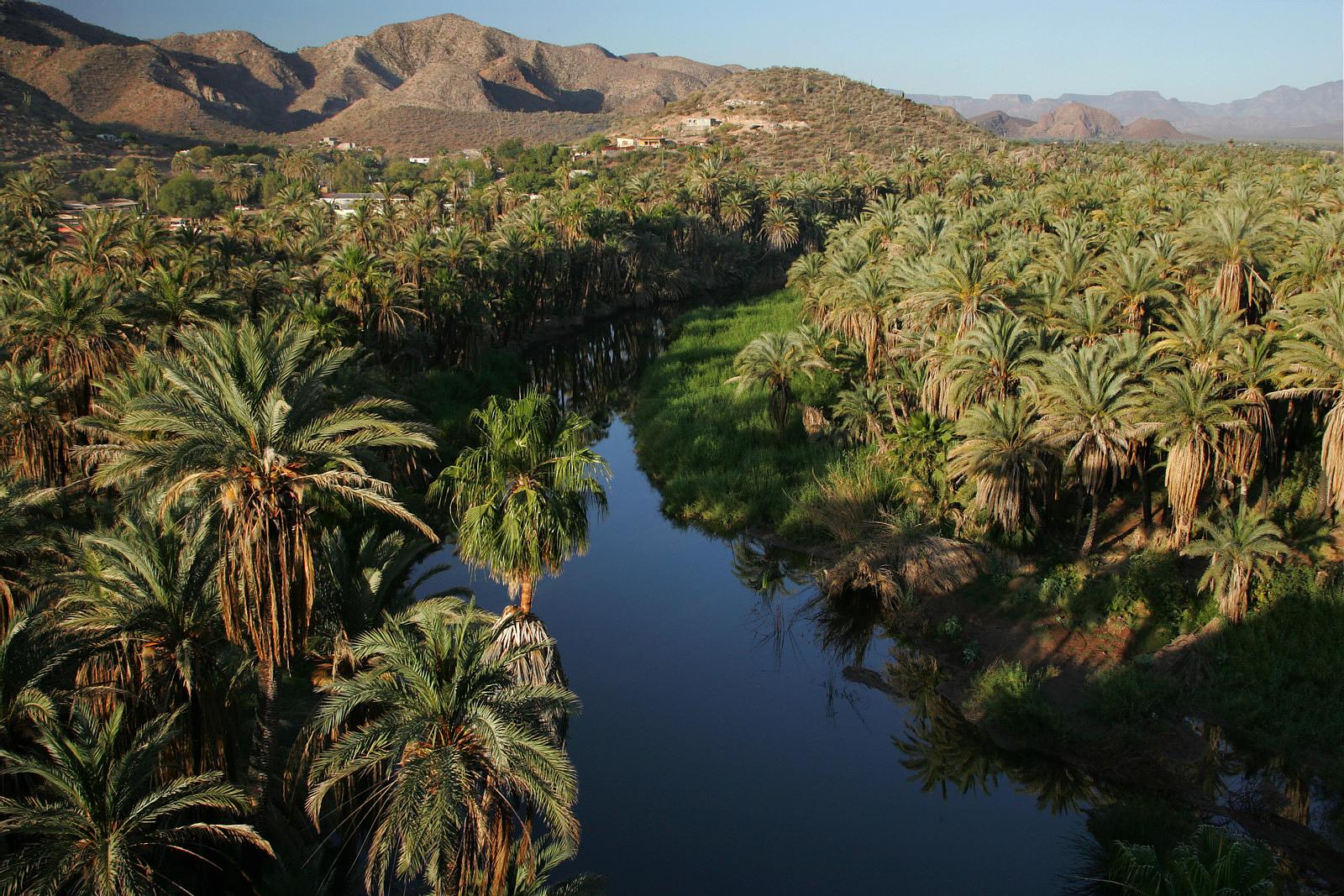 The Río Mulege, an Oasis in the Desert 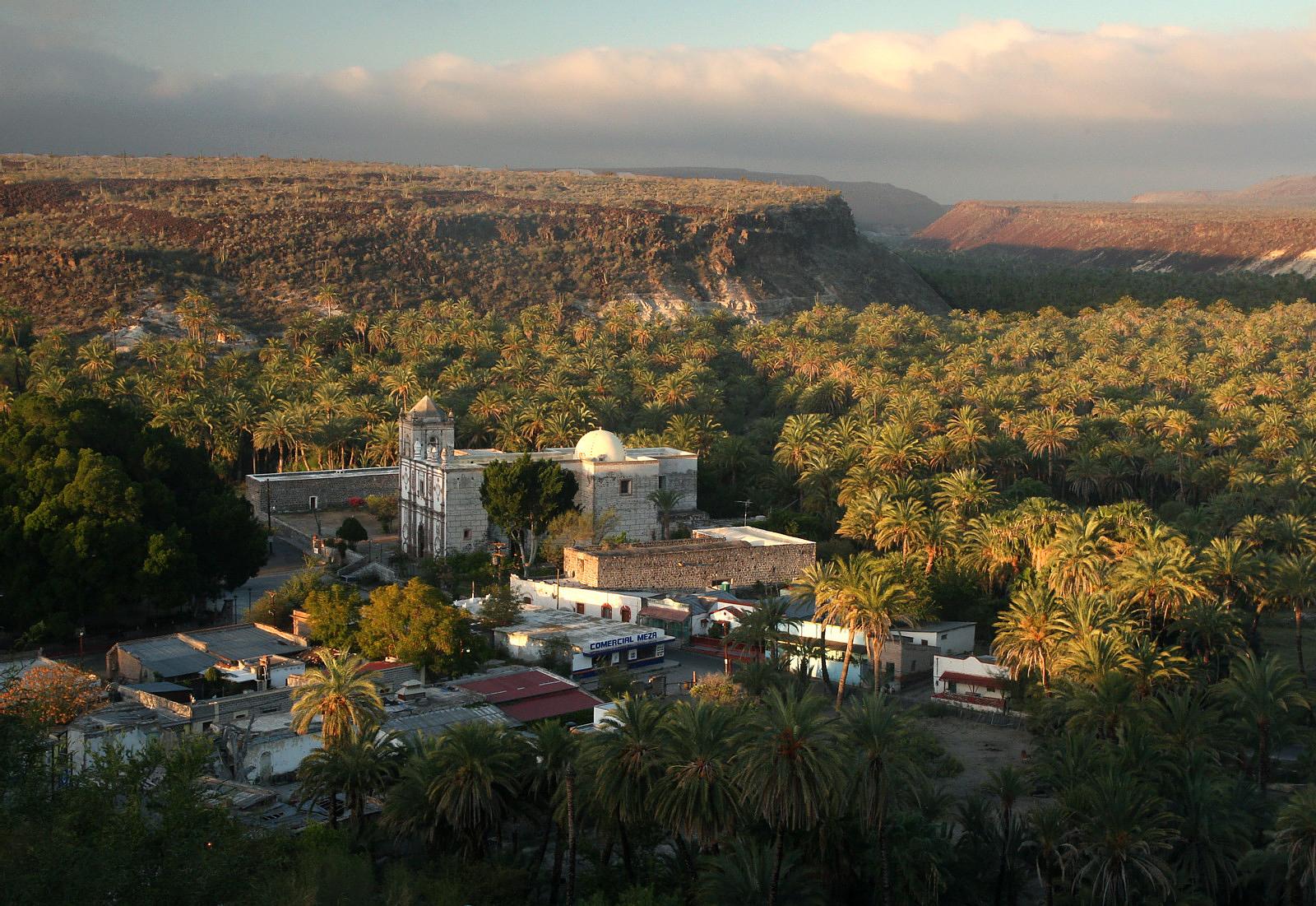 November is a dry month with an average of 8mm (0.3in) rain. The average maximum daytime temperature lies around 28.4°C (83.12°F). If you enjoy looking at a blue sky and love the sun than this is a great time to go to La Paz with 245 hours of sun.

All lodging has been booked and a room will be assigned to you on registration.